The sky is high, the river is long…

It reminded me of a family, home for the Christmas holiday. Everyone greeted each other warmly with smiles and hugs. In the middle of the group was Iwama Shin Shin Aiki Shuren Juku, Hitohiro Saito Sensei standing healthy and tall.

Over 250 people gathered in Reno, Nevada for this seminar hosted by Vince Salvatore Sensei of Aikido of Reno to study under Hitohiro Saito Sensei. The seminar that Hitohiro Sensei was to instruct for them was rigorous, but was taught with humor, kindness and a light touch.

I was not the only one that noticed a freshness and vigor about Hitohiro Sensei. He looked like someone who had just finished a long spiritual practice. In reality he is a man who has faced many challenges head on that he could run or hide from; and his belief in himself showed in his demeanor.

In today’s world, people live very long lives, much longer than our predecessors. It is a blessing in that we are able to spend more time with our parents and grandparents, but even as lucky as we are, as our loved ones age into their seventies or eighties, all children worry about the inevitability of the future.

In the past three years, Hitohiro Sensei has had a high pass to climb due to the passing of his father, the late Morihiro Saito Shihan. Even before his father’s death, Hitohiro Sensei had a looming burden to bear, and when his father finally fought his last battle and passed from this life, his death was a traumatic event not only for Hitohiro Sensei but for the entire Aikido world.

After his father’s death Hitohiro Sensei had much to do to settle his fathers affairs, and care for his mother as well as his own family. As the new householder for the Saito family, he also had many decisions to make concerning the past and the future of Iwama Ryu and students around the world. It was a time of great trial and tribulation, a time for peeling away some of the past which must have felt to Hitohiro Sensei like he was peeling away parts of his own body.

Students, associates and friends around the world held their collective breath, waiting to hear the fate of their future. Upon Hitohiro Sensei’s decision to become independent, everyone had their own decisions to make. Some chose to stay with Hitohiro Sensei and some did not. What is now a famous phrase, “I am a student of Morihiro Saito Shihan, I am not a student of Hitohiro”, illustrates some of the painful separations that Hitohiro Sensei had to endure. To speak such a phrase shows little respect or understanding of the passing of tradition, and I am sure that although Hitohiro Sensei did not show it, it was deeply hurtful to his heart. Through this time, Hitohiro Sensei did not share his heart with others but kept calm and to himself. Finally through this journey Iwama Shin Shin Aiki Shurenjuku was born as an independent organization, and with this birth came the rigors of not only a new organization, but a new family home and public life.

Last summer Hitohiro Sensei, his wife Hisako and three of his children traveled to the United States to visit my dojo in Denver. It was their 15th wedding anniversary, and this trip was part of their anniversary celebration. Hitohiro Sensei was beginning to take control and be able to balance the stresses and responsibilities in his life with growing skill. 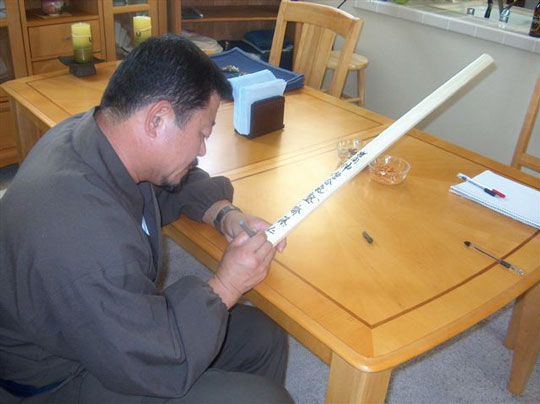 At a lunch meeting with Aikido Journal Chief Editor Stanley Pranin, Hitohiro Sensei apologized for being out of touch since his father’s death with heartfelt sincerity. Mr. Pranin in his wisdom understood, and the two made plans for Hitohiro Sensei to instruct at the Aiki Expo 2005. At the table were Patricia Hendricks Sensei and Vince Salvatore Sensei, whom both seemed very pleased with this reconciliation and reunion.

Current instructors such as Pat Hendricks Sensei and Vince Salvatore Sensei were both uchideshi under Hitohiro Sensei’s father Morihiro Saito Shihan. Many of this generation of uchideshi are actually the same age or some are even older than Hitohiro Sensei as they had practiced under his father. Iwama uchideshi no matter which generation have a common bond in the experience in Iwama that they all managed to survive.

An Iwama uchideshi knows the freezing cold of winters there, and the sweltering heat of summer. They know the rigors of countless hours of intense training, and what it means to try to survive in an unfamiliar culture. They know the small joys of sharing a last piece of toast, of helping each other with chores, of practicing so intensely that they dream alternately of practice and foods they miss from home and they know what it means to survive on pennies a day at times.

To put oneself through this kind of training voluntarily and be able to survive it is what makes them Iwama graduate uchideshi and the competent instructors that they have become.

American students have studied in Iwama as uchideshi since the 1960’s. Each student metaphorically is like one strand of straw worked until it is strong. Each straw twisted together become a rope that connects the past with the future and is what we call tradition. Along with the others the straws are part of the rope, by themselves they are only pieces of straw.

To witness the reunion of many of these Iwama uchideshis in Reno was a heart warming experience; one that I am sure Morihiro Saito Shihan would be happy to see.

Part of the wonderful attitudes of these instructors was formed during their uchideshi shugyo(training). Uchideshi shugyo is not the practice of Aikido technique only. Part of the practice is the personal commitment, the willingness to temporarily give up personal freedoms and comforts in exchange for intense physical practice. It is by truly committing one’s self in an environment of limited freedom that one finds true freedom. There are many people in today’s society that want these things, but few who have given what it takes to achieve them. The ones that have, are the ones who have made over the pass…

Hitohiro Saito Sensei is currently working on rebuilding the Iwama uchideshi program at his new dojo in Iwama. This new program will reflect the traditions of the uchideshi training of his father, mixed with a more modern approach suitable for today’s generation of uchideshi. Hitohiro Sensei is researching programs implemented in temples and other serious places of study to incorporate into today’s Iwama Shin Shin Aiki Shuren Juku uchideshi program.

Iwama’s original Aiki Shrine and the dojo of the Founder today is just an echo of the past. The power of the Founder or of Saito Family remains there only in memory. One cannot learn good Aikido technique here with only the whispers of the past as a guide, one needs the guidance of a dedicated professional instructor as can be found in Iwama’s Hitohiro Saito and his new organization Shin Shin Aiki Shuren Juku. Today there is mainly emptiness at Iwama’s Aiki Shrine dojo supervised by those who only wish to capitalize on the Founder’s name and history.

I have met many graduate Iwama uchideshi who praticed under Morihiro Saito Shihan in many parts of the world. All of those I have met, even if they did not go on to become Aikido Instructors, exhibit the calm, confidence and ability to face life head-on that allows true appreciation of the journey. It is in their eyes, and their faces reflect the knowing that they are the ones who have made it over the pass…
At this seminar in Reno, Hitohiro Sensei talked frankly with his students, expressing many of his new opinions and appreciation. Here is a synopsis of some of the points he made.

At the close of the seminar, Hitohiro Saito Sensei said partly out loud and partly to himself as he looked upward toward the sky, “What do you think Father, was it good enough?” It is with my highest recommendations that I recommend the uchideshi program at Iwama Shin Shin Aiki Shurenjuki under Hitohiro Saito Sensei. If you are interested and have questions feel free to contact us, we would be happy to offer advice and guidance.