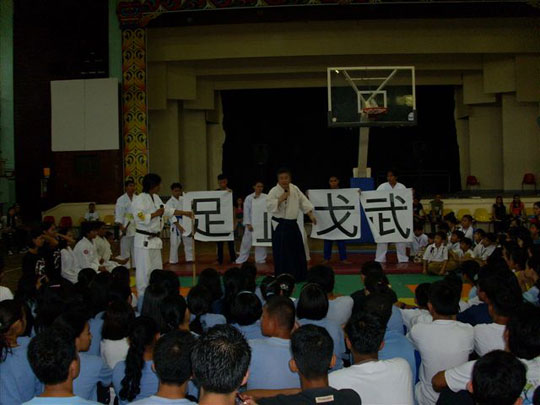 Homma Kancho speaks on peace from the martial arts point of view earlier this year at the Mindanao State University.

Nippon Kan General Headquarters has made many friends through AHAN all over the world, and has a special relationship with AHAN Mindanao Coordinator Ava Yancha and her students in Illigan City, Mindanao Island in the Philippines. Ava has been especially active in the development of peace and human resource development through the Aikido she shares with her students in Illigan City and all over Mindanao Island.

More articles on AHAN in the Philippines can be linked from the end of this article.

This past August, Nippon Kan Instructor Mariusz Ferenc after concluding a five-month resident instructor internship in Nepal was sent to join Ava Yancha in Mindanao. Mariusz went directly from Nepal to the Philippines, where he went to help Ava in developing the technical proficiency of her core students in Illigan City. His stay was expected to be a little over two months. 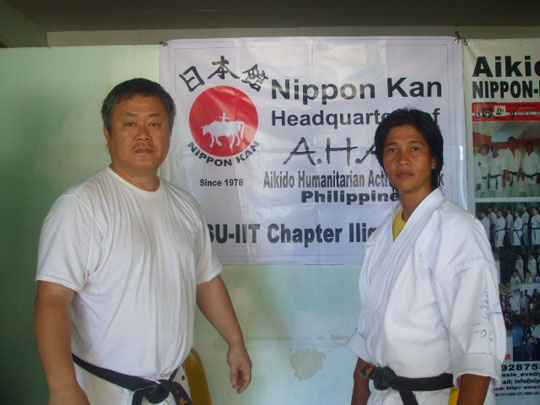 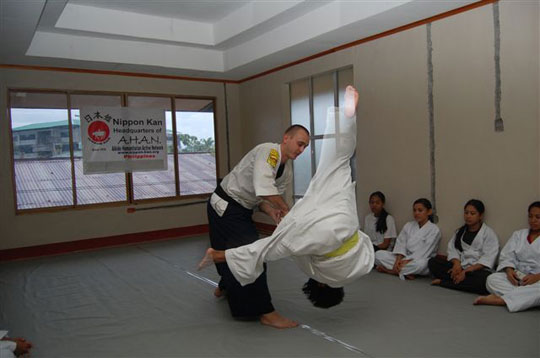 At the conclusion of our tour to Japan to attend the 40th Anniversary Celebration of Aikido Kobayashi Dojo, I had planned to fly to Illigan to meet with Ava and Mariusz before his return to the United States. On September 27th, I made my way to Narita airport to await my flight to the Philippines. It was at the airport that I received the news.

The news was not good. There was a political emergency taking place in Mindanao and this time it had been violent and deadly. There was no choice. I cancelled my trip and gave word to the Nippon Kan staff in Denver to make immediate plans for Mariusz to evacuate the area as soon as possible.

I am a martial artist, not a priest or a politician. Anyone from any background who wishes to practice Aikido with me, I view as an equal.  In this report I do not judge or take one side over another in the strife that is occurring in Mindanao. From this position I report the events as they unfolded by the only communication available in real time between three countries—the Philippines, Japan and the US… email. 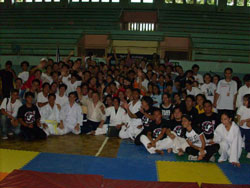 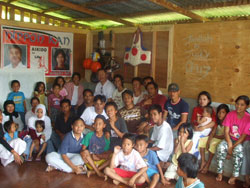 We need to find peace for future of these young peoples.

August 17thm 2008
Sensei, Mariusz is safe. now 5 days no class in aikido in iligan…maxim hotel was explode many bomb was planted….please pray for us ..all  schools here suspended for 5 days…
Ava

August 18th,2008
Dearest Homma Sensei…We are now at Cagayan De Oro City Many civilians died one of the students…many children died because this situation…bomb are planted somewhere in the city…thats why i let maruisz san be safe. 1am in the dawn we arrived here…in  cagayan de city…please pray for us for peace here in iligan city…many ears of children cut and suffered…please help us….
Ava

These emails we received in August so we were aware that the fighting and casualties had escalated in Illigan City at that time. In August, Ava and Mariusz had evacuated Illigan and moved temporarily to nearby Cagayan de Oro. Interestingly, the word we had heard from Mariusz on Aug 10th, was that everything was going well and he was teaching classes every day. His mood at that time, was bright.

August 17th,2008
At the moment  iam in hotel in cagayan de oro with Ava、・・・ family and few security guards. we came here last night. we are safe and everything is ok . yesterday in iligan there where many bombs. two had exploded,7 people where killed. Ava says that it is not safe for me to stay in iligan at the moment. i will stay in cagayan de oro for a few days until its safe to go back to iligan.
this is what i can say for now. anyway. everything is ok and we are safe. nothing to be worried about.
Ava is available under her mobile.  ・・・・・I will e mail soon
Mariusz

The situation in August in Illigan City was volatile and one week made a big difference in an escalating unrest. The situation did calm down however and after these episodes and Ava and Mariusz returned to Illigan City where practice resumed again. Everything seemed to settle down, and plans continued for my visit to Illigan at the end of September until we received the following messages at Nippon Kan Headquarters in Denver.

Sept 21st, 2008
Sensei,
Something is happening again in iligan . Ava says it is not safe for me to be here. we are going together to Cagayan now. Ava ask me to tell you to also cancel Homma Sensei’s flight this time.
i will e mail soon..
Mariusz

I have tried to find out what exactly has happened but it is difficult. There has been violence and more violence for the end of Ramadan has been threatened. Classes are being canceled after the 25th for Festival week because of fear there will be more bombings. Tourists are on high warning alert.

Chrys, Please let me know as soon as possible what Homma Kancho would like to do.

Emily Sensei,
we are in cagayan now. last night I heard bombing sounds. Ava said that the tower of Abunu was bombed and also Pugaan. that was very close to iligan. intelligence report that tourist who visit iligan are not safe until December.
Ava advices to cancel Sensei`s ticket because it is not safe at all to visit Iligan or Marawi at this time.

She is very sorry for that situation.i also hope to leave Philippines as soon as possible..
regards, Mariusz

I had planned to come to Illigan to teach an Aikido seminar, but as the intensity of the situation in Illigan increased it became increasingly apparent that even if I were able to get to Illigan City safely, that no students would be venturing out of their homes for an aikido seminar until this trouble had passed.

All of this turmoil was building while I was in Japan. Email communication were being relayed from Mindanao to Nippon Kan headquarters in Denver and on to Tokyo. Finally on that day at Narita airport I made the decision not to go to Illigan City and arrangements were made for Mariusz to return to the US immediately.

The story continues. In October and November the reports we received seemed like the situation was settling down again. Then again in December…

Highschool and College I will be able to continue teaching but town dojo we have to close down because of danger. Those are the pictures were we feed the homeless with joanne san and the students also when teach the Bantay bata 163 means childrens who has been moulested(rape) from there relatives and neighbor…

Our dream of opening the peace dojo, if dojo open we can take more of these kind of children. Teaching peace is the best valuable education for our children at this time. God Bless you   Ava

Some of the information originally contained in the actual emails has been edited for security and privacy reasons, and not all emails have been included, but the emails in this article are real and are the actual correspondence between Mindanao and Nippon Kan Headquarters. The purpose of including these emails in this article is to try to share the reality of this experience. Facing this kind of situation, the ideals of love and harmony in Aikido techniques feel a little irrelevant. The lesson here I believe is to understand this point. Aikidoists can sometimes live in an illusion, isolated from REAL trauma and conflict. We need to make sure we understand that being a skilled Aikido technician in the controlled environment of a dojo does not make one a master of true conflict. What could we really do as Aikidoists in the kind of situation that has been going on in Illigan City? I think this is a more valuable topic for students and instructors to discuss than self absorbed talk about love, harmony and ki power. Facing this question head on will get move us closer to the practice of Aikido based on the true principles of the Founder Ueshiba. We need to learn from what Ava is doing in the middle of this dangerous crisis; she is taking care of abandoned children.
NOTICE
The following photos have been blurred for security purposes 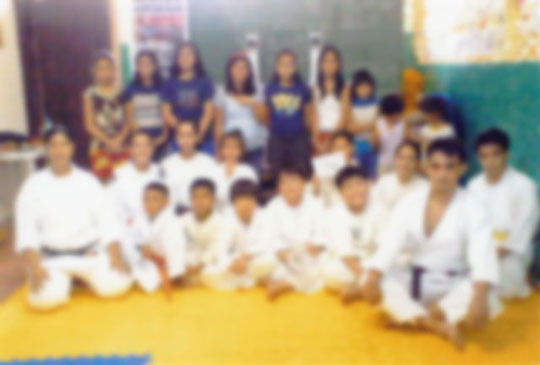 Last class before the dojo was closed as a security precaution. 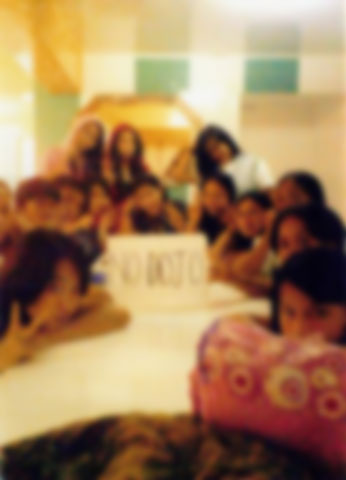 In need of a new dojo. 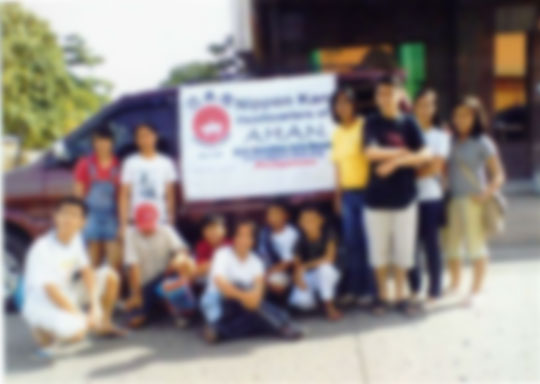 We have no mat but we can practice through AHAN 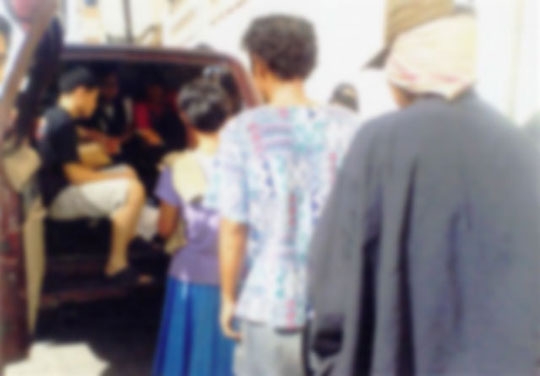 People lining up for food. 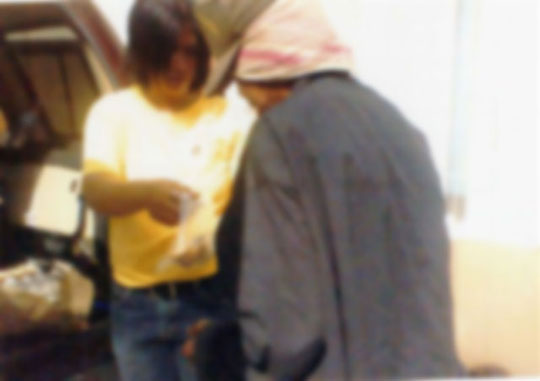 Humanitarian activities with the homeless. 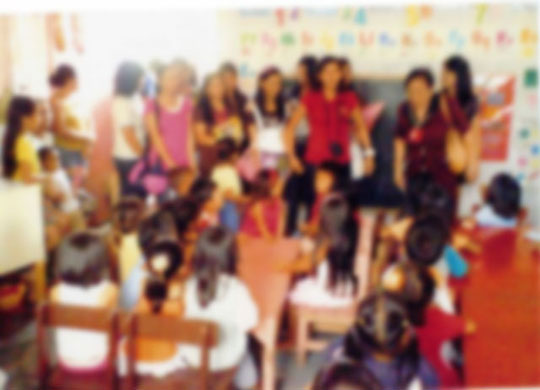 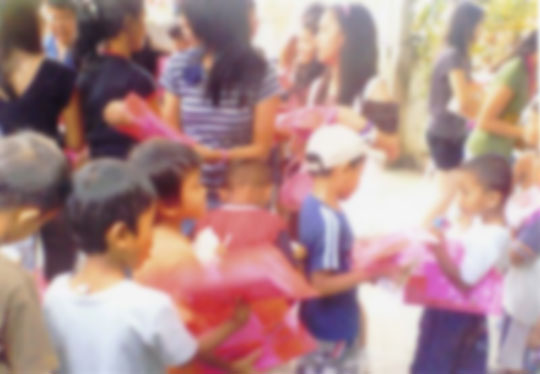 For instructors like Ava Yancha, a native woman in the small city of Illigan in Mindanao, there is no difference between Muslims and Christians or rebels and patriots. As an Aikidoist and an activist, she works very hard to bring true peace to an area of the world that is marked with violence. Even risking her own safety, Ava is truly on the front lines of our Aikido practice. All of us here at Nippon Kan General Headquarters will do our best to support her efforts in every way we can.

To all of the Aikido students in Mindanao, I council you to keep a calm center. Make decisions calmly, respect each other’s lives and try not to involve your self in violent struggle. We all hope that peace will return to your life in Illigan soon. I will visit soon, to help move forward your building plans for the dojo of peace in Illigan.

I have many Muslim friends in this area of the Philippines and also I have many Christian friends too. Both sides want peace.  They are all my friends.