Four and a half years ago, Marcos and his wife Bernadette began their practice of Aikido. Bernadette has a very good job at a bank in Rio de Janeiro, and her husband Marco is a professional musician. He is not a rock musician however, he is a classical musician and one of the instruments he plays professionally is the upright bass. Unfortunately, this particular instrument does not have a major part to play in most of the orchestral symphonies, and Marco makes fun of himself when he describes his musical participation as being able to contribute maybe one plucked note “bom” or maybe two “bom, bom” in any given piece. He told us of an incident where he lost track of time chatting with the cymbal player. He became so engrossed in his own conversation that he missed his cue, forgetting to contribute a “bom” to the piece. He told this story with such sincerity that he had us all in stitches laughing! His son is also a bass player in New York orchestra, a fact in which Marcos is very proud.

One and a half years ago, Marcos and his wife Bernadette opened Okaeri dojo in the mountains outside of Rio de Janeiro. The facility houses a caretaker dwelling, dojo, living quarters, outside training area and organic farm.

As new farmers they have made a good start at harnessing the lands potential. With a little more research on composting, fertilization and other farming techniques their gardens will continue to grow and literally “bear fruit”. They do have nature on their side however; learning to grown things in a jungle does have its advantages! 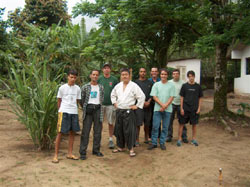 Photo with the Okaeri dojo folks 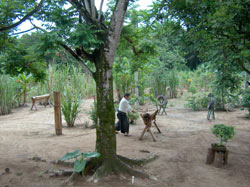 Now they can do Tanren uchi keiko.

When I last visited this past spring, Okaeri dojo had not yet developed its outside practice area for bokken and jo. During that visit, I left rough sketches of different types of bokken and jo striking practice stations, and from those sketches, Okaeri dojo students fashioned a wonderful training area. I changed quickly into my keiko gi and tested the new course. I was pleasantly surprised; they did a great job!
Okaeri dojo is a place where Aikidoka can come together to practice in a peaceful natural setting. Many come from Rio de Janeiro and surrounding urban areas on the weekends to escape the hustle and bustle of city life. Style or organization does not matter, everyone is welcome. Okaeri dojo’s name uses part of the Japanese phrase “okaeri nasai” which translates as “welcome back home”. This is a fitting name for this retreat whose residents and guests “just love Aikido”.

Okaeri dojo is also a gathering place for children and young adults from near by towns and villages. It offers a unique opportunity for these children to meet and practice Aikido with visiting Aikidoka from Rio. It is a place where ideas are exchanged, and the adults who visit Okaeri dojo are important role models for the village youth. Through Okaeri dojo these young people can catch a glimpse of dreams for their future, and an opportunity to make goals and achieve them.

The children of course do not pay class fees. In fact I learned from Marco that some of the middle school children walk two hours to get to the dojo for practice. Marco lent a couple of the children a bicycle to use to hasten the long trip, with the understanding that the bicycle was to be used only to come to the dojo and not for play. 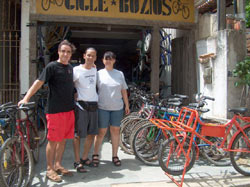 Thinking about these children reminded me of something I had not thought about in a while. In this village, the children do chores at home before they go to school. After school there are more chores to be done before they can even think of going to the dojo. Most likely, on weekends there is even more work to be done at home. The work that these children provide for their families is part of what the family needs to survive. I don’t think “picking up your toys” is high on the list of chores for these kids. The two hours they spend walking to the dojo is a great deal of time to spend with so much to be done every day. Some “city folk” might say that children need to walk for the exercise. These children get plenty of exercise just getting through all of their daily chores! We forget how valuable two hours can be, when other resources are limited.

I thought of my own childhood in Japan. When I was a child, most children did not own their own bicycles. All the kids used their father’s bicycles and came up with some very creative ways of peddling them without being able to sit on the seat and reach the pedals! We used to ride, standing on the pedals while slanting awkwardly under the center bar. We could even get two to three kids on one bike at the same time! ANY kid that had his own child sized bicycle was the envy of all of the other kids in the neighborhood.

Okaeri dojo is not a city dojo, nor even a town dojo; Okaeri dojo is a village dojo. Upon hearing this story, I got up to go find ten used bicycles that we could buy to donate to Okaeri dojo for the children to use. To these children, bicycles are much more useful that a bokken or a keiko gi; you can find a stick most anywhere to use as a bokken, and you can wear practically anything to practice in, but a BICYCLE, is worth its weight in gold!

I look forward to my next visit to Okaeri dojo. Marco, the notes you play in the orchestra might be few, but the notes that you play make the symphony whole. In this small village the notes you play at Okaeri dojo resonate around you, and those who have the chance to visit are fortunate indeed. Keep moving forward, you and Bernadette are on the right path. See you next year!

It’s not even the weekend, and there are people, people, people everywhere in the streets of Arab town in downtown Rio de Janeiro. Lining the streets are endless rows of shops, with wares piled high, some piles spilling out onto tables outside the shops walls into the streets. Merchants stand at attention outside of the doors to their establishments, enticing customers to come inside. This district of Rio de Janeiro has been designated as an historical area, and its buildings are protected.

Residing in the district are predominantly immigrants and their descendants from countries in the Middle East. The area is alive, and the energy of the people is infectious!

Easy to miss in all of motion and commotion of the streets is the stairway leading to Bujutsukai dojo. The dojo is owned and operated by a Mr. Munzaer. Mr. Munzaer had approached his father a few years ago with a dream of building a dojo for the practice of the martial arts.

Now the practice of the martial arts did not particularly meet with his fathers strict interpretation of the teachings of Islam, however in his wisdom he decided it was better to grant permission to build the dojo close by, than to lose a son; geographically if nothing else. The dojo was built on the second floor, directly over his father’s clothing store below. 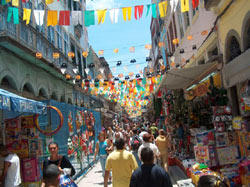 The crowded streets of Arab town in Rio de Janeiro. 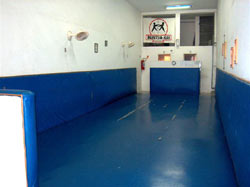 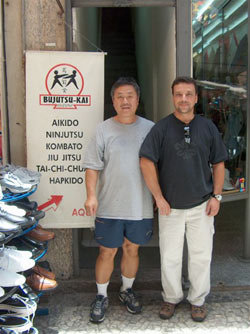 In front of the dojo with Marcio.

It was a little after noontime when we went to visit Bujustukai dojo. After negotiating the narrow staircase and entering the dojo, I had trouble seeing anything as I peered into the darkened room. I could barely make out a few figures stretching on the mat. Our guide Marcio whispered to me an explanation. “This is a Ninjitsu class, so the lights are turned out, the lights break their concentration”. He told me this with a straight face, but I did catch a smile after he finished his explanation.

Aikido, Karate, Tai Chi, Ninjitsu, Jujitsu, Happkido and Combat techniques are all taught at Bujustukai dojo. My mind wandered suddenly to the tables on the streets below piled high with wares, this was a veritable martial arts smorgasbord!
The physical space occupied by the dojo is about twenty feet by thirty feet square. It is a small narrow space, with quite a large scope of classes offered there! As I stood there I thought that this dojo’s concept is a reflection of the wisdom of the community that surrounds it; everyone’s ability to share with each other and survive in close quarters.

For someone like me, who seems to live and breathe Aikido on a daily basis, it was an awakening to see Aikido metaphorically lined up as if on a supermarket shelf with all the other martial arts, no better no worse, just part of the group! It was a little shocking to me but I began to see the reasoning in a new light.

All of these martial arts together, work to help each other to survive. It would not work in this environment to be a purist or an elitist and teach only Aikido. Here it is not the practice of Aikido as a martial art; it is the practice of the martial arts. Working under this concept has allowed this group to cohabitate and survive in their community.

Maybe we as Aikidoka misunderstand at times that “I am an Aikidoka” equals “I am a martial artist”. Maybe this is too narrow of a view. Seeing these martial arts working together was a positive revelation for me and opened my eyes to their reality.

The Aikido practice at Bujutsukai is instructed by Alvaro Sensei. Like Okaeri dojo, Aikido instructors also gather here on a monthly basis to share in their training. It was an interesting place for me to teach and after practice we all retired to a nearby neighborhood restaurant for a bit of refreshment. Emboldened after finishing a cold beer I asked if the dojo was doing okay financially. Marcio laughed as he answered, “The owner, Mr. Munzaer is a very nice man. If students come he asks for rent, if they do not come that month, he doesn’t ask. Alvaro Sensei is a lawyer by profession and teaches Aikido because he loves to teach and practice Aikido, he doesn’t teach to make money”.

I have said before that “Human beings create the martial arts; martial arts do not create human beings. The Martial Arts are an extension of the human mind. There are good martial arts and bad, and both are expressions of different parts of our human nature. Take a look at history to find examples of this, especially the history of Japan.

Aikido today is practiced all over the world, and there are as many reasons for its practice as there are places it is practiced in. Some Aikidoka practice within the structure of large organizations that dictate style and association, others make their own path. The people that practice Aikido purely because they love it and have the ability to incorporate Aikido into their own life have the ability to flourish. This love for Aikido I witness in two more places I have visited around the world; Okaeri dojo in the hills outside of and Bujustukai dojo in the heart of Rio de Janeiro.