My name is Gaku Homma. I first came to the United States from Japan about 40 years ago. Since my arrival I have been teaching the Japanese martial art of Aikido. Including my studies in Japan, I have been practicing Aikido for more than 50 years. I would like to give you a bit of history about Aikido as I have experienced it during my lifetime.The practice of Aikido, founded by Morihei Ueshiba 1883-1969 (commonly referred to as “O’Sensei”) has spread from Japan to all corners of the globe.

Aikido, as with any sophisticated art, was not created by magic. O’Sensei and other Japanese masters developed Aikido following years of intense training and research in other styles of self-defense. Aiki Jujitsu and Daito Ryu Jujitsu were two martial arts O’Sensei, studied to develop Aikido. Today the organization founded by Ueshiba is called Zaidan Hojin Aikikai, or the Aikido Foundation, which is based at Hombu Dojo in Tokyo.

Names such as Aikikai Aikido, Hombu Aikido and Ueshiba Aikido refer to this same organization. In the United States, the highest percentage of dojos (martial art schools) are affiliated with Aikikai Hombu Dojo. The United States Aikido Federation (USAF) is the largest of these Aikikai federations in the United States. A few of O’Sensei’s students broke away from the Aikikai Foundation after his death in 1969. They formed their own organizations, such as Tomiki Aikido, Yoshinkan Aikido, and Ki Aikido.

As a child in Akita, a small city in Northern Honshu, I studied Judo, which for Japanese kids was as popular as baseball and basketball in the United States. At that time, Aikido was a new martial art. Before World War II Aikido was restricted to the elite and practiced by military leaders, Imperial dignitaries and top executives. It did not become generally popular until after World War II. Most of the television heroes I watched as a child studied Judo and wore a hakama (the outer garment worn as part of an Aikido uniform). These TV supermen inspired me just as Bruce Lee films motivated Americans to learn more about Asian martial arts. In that way, my path was probably not much different than yours!

I, however, had the good fortune to become O’Sensei’s student. I also served as his last live-in student. After O’Sensei’s death, I studied with many other high-ranking Aikido instructors. Before the end of World War II, O’Sensei moved from Tokyo to the town of Iwama, which is two hours northeast of Tokyo. There he built the Aiki jinja (Aiki shrine), and lived the rest of his life dedicated to the development of the art of Aikido.

For the last year of his life, O’Sensei was moved to Tokyo, where he stayed until his death.It has been my belief that all Aikido organizations are part of the same family under the Founder, O’Sensei. After his death, I was not able to choose one organization over another. Instead, I studied Aikido independently. 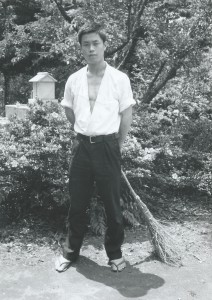 Because Aikido Nippon Kan is an independent organization, the ranking certificates given for kyu (beginning through brown belt levels) and black belt levels are signed by myself as Nippon Kan’s Founder. Though we are an independent school, our roots are the closest to the Founder’s of any dojo in the United States.