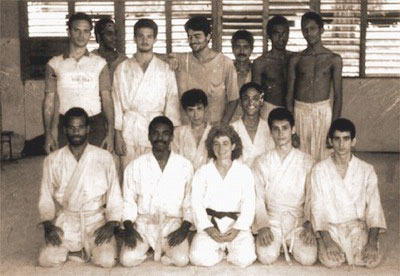 The picture was taken on March, 1994. It was in Santiago de Cuba, in the Judo dojo of the University of Oriente, (formerly Institute of Technology Julio A. Mella) were Susan Kinne taught Aikido.
In the picture (names are arranged as they appear in the picture):
Top line: Ernesto Robles – Rene Planas – Richard – Mateo – Josmir – ??? – Humberto Planas
Middle line: Vladimir Fonseca – ???
Bottom line: Rafael, Redin, Sensei Susan Kinne, Alejandro, Jorge Rivero (myself, also Eitan Behar)
I’ve been trying unsucessfully to find the missing names.
Redin and Rene met Susan in her previous trip to Cuba, also in the nineties, and they made the arrangements to open the dojo, and bring students. Except the two missing names, and Humberto, the rest of us were studying engineering in the Institute.

Today I had the enormous pleasure to read your article “The Story of a Woman Pioneer Aikidoist in Nicaragua” – Aug, 15th. Reading about Sensei Kinne brought to me a lot of warm and dear memories.

My name is Eitan Behar (formerly known as Jorge Rivero Behar). I was born in Santiago de Cuba, and I met Sensei Kinne in 1994 in one of her trips to Cuba. She was teaching English in the university while receiving classes on Electrical Measurements. By this time, I was in the 4th year of my studies on Telecommunications Engineering, and we had a few teachers in common. Actually, I met her because one of my best friends (Rene, from the Karate dojo where I used to practice), met her in her previous visit and asked her to teach Aikido to the Karate team.

I still remember her from the first day explaining that if we wanted to learn Aikido, then it will be Aikido, but not Aikido techniques to be used as Karate. I have to admit that it was extremely difficult for us to understand the difference. We commited ourselves to learn Aikido, and for the next 3 months we dedicated completely to Sensei Kinne. We began to train from 5pm to 8pm, five days a week, and during the weekends we gather in the dojo, or in her hotel room to learn about Aikido theory, and at the same time, English. She brought with her a couple of books that we read over and over.

She was the first Aikido teacher in the city. And before we noticed, we had an Aikido dojo. She organized it in such a way that we were able to keep with the classes after she returned to Nicaragua. The more advanced students kept teaching the newcomers. Thanks to her efforts, we met with the president of the Cuban Aikido Association, Dr. Carlos Sosa, and since then the Aikido school in Santiago de Cuba has been active and recognized within the country. Students from the dojo are invited regularly to seminars and summer camps.

Today, there are a couple of dojos in the city, one Nidan, and about 6 Shodans, all of them thanks to the legacy of Susan (as we all called her), and of course, the support of the Cuban Aikido Association.

The name Susan Kinne is remembered and used by every Aikido student, even by those that didn’t meet her. And you can feel their hope that someday she will return to the dojo to teach again.

She changed the lives of many (including mine), and left a seed that became a strong tree.

You can read this story in Spanish in the website: http://thecajm.org/eitan/aikihist.html

I hope I didn’t take too much of your precious time.

“an intense aikido student” – as Sensei Kinne wrote about me in a Nicaraguan Cordoba bill I keep home as a treasure.