I have heard this before, I reflected. “When I started practicing martial arts there were no instructors here and no one else to practice with. I learned by reading books, and practicing on my own”.

I first heard this I think in Mongolia from the current Chief Instructor and President of Kyokushin Karate, Mr. Chinzorig. I was hearing it again here in Istanbul, Turkey where I sat over tea with our host, and Aikido pioneer in Turkey Ali-san Uludag Sensei. Many people, for as many different reasons, I began to conclude, have begun their practice alone, with books for instructors.

In Mongolia, the reasons for this revolved around world politics. Before 1991 when Mongolia broke from Communist rule, it was illegal to practice martial arts in that country. Students who did know something about the martial arts learned their arts in Russia where they were sent to study academics. There they found books on the martial arts which they brought back with them to practice on their own in secrecy. Mr. Chinzorig told me that the old Japanese Judo movie “Sugata Sanshiro” was a popular favorite among underground martial art groups in Mongolia. Once in a while the group’s practices would be found out, raided and everyone arrested for “subversive activity”.

For a martial art from as far away as Japan to assimilate into another country takes a lot of time and effort, especially when the cultures, languages, arts and religions differ widely. If the practice is illegal or taboo in some way, the more effort it takes for an art form to take hold. It is the efforts of these pioneers who helped the martial arts take root in their countries that I would like to pay tribute. 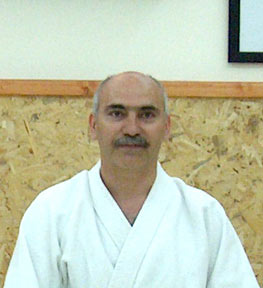 This trip we traveled to Turkey May 19th-25th, 2004 to teach a fundraising seminar for the Losev Foundation for Children with Leukemia. We were invited by Ali-san Uludag Sensei who currently is 49 years old and has spent much of his life developing the martial arts in his homeland of Turkey.

Ali-san began his martial art training in 1971, when he began practicing Tae Kwondo, Karate and Kick Boxing. During his service in the Turkish military, Ali-san continued his training in Karate. His first introduction to Aikido was in 1982 when he discovered old textbooks describing Aikido Techniques. Ali-san attempted to contact Aikikai headquarters in Tokyo, Japan, to try to find out more about this new art to him. His first question for Aikikai Hombu was a simple one. “What is Aikido?” To this request for information, Ali-san did not receive any response. He wrote a second letter, stating that he would like to begin a practice of Aikido in Turkey and wanted any assistance, or guidance, or instructional materials that would help him get started. Again he received no response. Ali-san laughs now remembering those very early days and reflects “I am not surprised we did not receive any answer. We were writing from a far away land, and in those days the world was a bigger place than it is today.

Ali-san and a few friends decided that they would try to learn this new art of Aikido on their own, and began their practice by going over an old, worn Aikido manual that was written in Japanese, a language that none of them could understand.
A short time later, a Japanese company opened up a branch office in Istanbul. The office manager that was sent to Turkey to organize the new office happened to be Aikikai Godan, Kenji Kumagai Shihan. With Kumagai Shihan’s arrival, Aikikai Aikido officially began in Turkey with six students; one of which was Ali-san. When Kumagai Shihan was eventually called back to Japan a few years later, his six students went on to become instructors that are still active in Turkey today. Ali-san now has many students of his own not only in Turkey but also in neighboring countries.

Ali-san has a wise and gentle face, and has created an environment that is open and positive for his students. In return, the students Ali-san has are wonderful students that I enjoyed meeting very much.

The seminar held at the Marmara University gymnasium was organized by Ali-san and his assistants (especially Sever Sensei and Seha) and attended by many students from branch dojos in surrounding cities in Turkey. One group of students traveled eight hours one-way to get to Istanbul for the seminar. A tribute to Ali-sans personality and generosity, students from other organizations also attended this event. In all about 150 students gathered to attend the seminar that weekend. 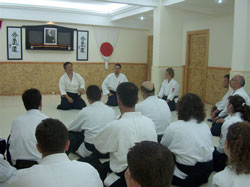 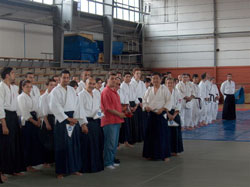 Photo with students after practice. 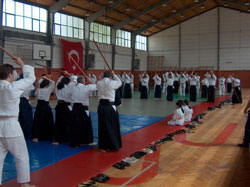 After we said our good byes to Ali-san and his students, we went to the coastal town of Izmir where we spent three days exploring the vast markets, the surrounding countryside and practicing Aikido with the Izmir Aikido branch dojo under Ali-san led by Bazar Omarou Sensei.After the seminar we had a little time to do some sightseeing, and marveled at the city teeming with life. Istanbul is a wondrous blend of both European and Asian influences, which bombarded the senses with sights and sounds I found fascinating and at the same time comfortable and alluring. The city was alive, very friendly and welcoming. It was a common sight to see people enjoying conversation over glasses of chai (Turkish tea) or Turkish coffee. In the evenings outside cafes were busy serving delightful varieties of Turkish meat and vegetable dishes. Turkey has a special drink, akin to absinth which turns white when mixed with water. The atmosphere in the streets and cafes of Istanbul had a sense of timelessness which I found quite inviting. The history and culture of this country manifests itself well in it’s peoples.

Before we went to Turkey I had read in guidebooks that Turkey might be dangerous in some places. The books warned travelers of places not to go, and situations to be aware of. Even the Japanese government has issued official travel warnings for Turkey as well as other countries in the region. Through Aikido, we were able to meet Ali-san and his students, and the experiences we had in Turkey were extra-ordinary. I concluded that the incidents of warning in the guidebooks can be found in any country these days, it just depends on who one happens to meet. Aikido in this case was a bridge through fears that brought people of different backgrounds together for a very special time.

I very much appreciate having met Ali-san Sensei, seeing his wisdom and receiving his openness to our ideas about Aikido and AHAN activities. I would like very much to return to this wonderful country.

I think it is not incorrect to conclude that there are still many people in countries around the world that could benefit from books on Aikido to learn from. I think it could be an important endeavor to organize a world book campaign. Not only new books, but used books in any language can be learned from, especially if there are photo sequences to follow. On your bookshelf right now there are probably books on Aikido that you have not looked at in years! Wouldn’t it be nice if these books could be put to good use? Nippon Kan has always taken books along for AHAN seminars to be given away or used to start a library in host communities, but it is only a start. An organization as large as Aikikai with students and supporters in almost every part of the globe could accomplish this task on a much larger scale. The students that could benefit from these books are part of our future, and an important element to invest in. 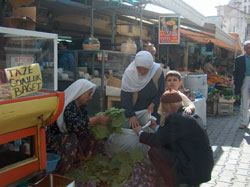 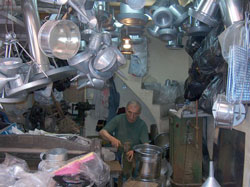 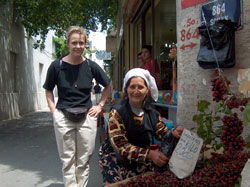 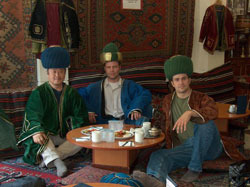 Sensei, Rick and Scott. “When in Turkey…”-a Turkish café. 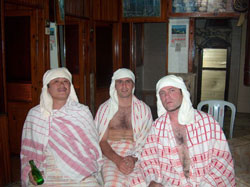