About two hours outside of Mexico City is the city of Cuautla; population 30, 000. 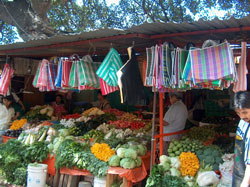 Cuautla is a city that has been somewhat bypassed by the tourist industry, making its charm and local flavor that much more real and alive.

Latin American cities I have visited all seem to be built in a common fashion, and Cuautla is no exception. At the heart of the city stands the church on one side, the town hall on the other, with the town square in between. Cuautla’s town square was alive, filled with people meeting, talking, playing, enjoying each other and the beauty of the square. The markets near by were bustling with activity, merchants and customers bargaining over mounds of fresh produce piled high. Small vendors cooked up plates of Mexican style delicacies hawking their particular specialties in melodious tones. The scene is not rich in a monetary sense; there is no Starbucks here, but what is here is a quality of presence and peacefulness that I found striking and comforting. 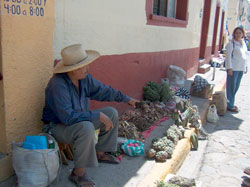 Herb vendor near the square. 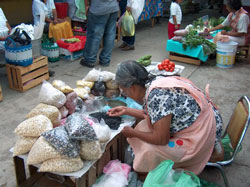 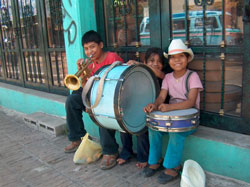 Aikido Cuaulta is on the edge of town. The surrounding neighbors we met were friendly and relaxed and time seemed to move at a much slower pace here. In the alleyways people gathered to play a friendly game of dominos and kids playing in the streets were more prevalent than cars! Horse drawn carts held the right-of-way, blocking the street for the occasional minibus. A siren heard heralded the propane gas sales car rather than a response to a 911 call. Street corner restaurants topped with corrugated tin roots offered interesting and delicious fares, served with a smile. The town had the power to wipe away any tension or worry out of me, and I relaxed soon after I got there. 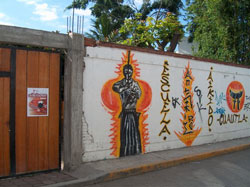 Dojo entrance, its not grafitti. 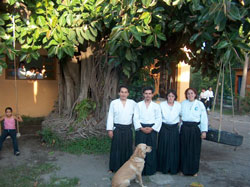 In front of the rubber tree. From left: Fernando, Alberto, Rebecca, Rocio Senseis. 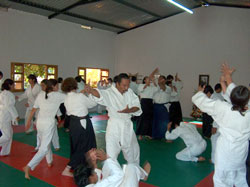 Practice at the Cuautla Aikido dojo.

Aikido Cuaulta dojo opened its doors three years ago by Alberto Mansano Sensei and his wife Rebecca. Rebecca, originally from Switzerland first came to Mexico as a exchange student. It was then that she met Alberto. When she returned to Switzerland, Alberto followed and it was there that he first practiced Aikido. Three years ago they returned to Cuaulta and built the dojo next door to Alberto’s family home.
Today the dojo has about sixty regular members and also serves as a gathering place for local community leaders and children alike. It is a community dojo that serves it’s community well.
Monthly fees average about $3.00 per person if you averaged all of the students who were able to pay with those who could not. “Money and Aikido are different subjects” said Alberto Sensei. “Being able to pay is not necessarily a requirement to be a member of this dojo”. This I noted, is part of what makes Alberto Sensei a member of his community first: collecting dojo dues payments was not as much a priority as his students being able to practice. “What else can I do…” he concluded.

In the garden at the dojo lives a huge rubber tree that provides shade and shelter for students and creatures alike. From a high branch hangs a swing for the children to play on and among the exposed roots lives an uchideshi rabbit that the kids delight in chasing. I stood watching the children from the window of the dojo, and thought to my self…”This scene is familiar to me, different but the same.

In the Japanese word Dojo, Do is the character for Way, and Jo is the character for place. Another way of describing the dojo or the “place of the Way” is as an interchange. A place where people traveling from East to West or West to East can pause to gather information, rest and find nourishment. This is the purpose of a town dojo, or machi dojo, a place where students pause to learn, to share and then to carry on.

My youth was spent in a town dojo, those are the roots of my practice. For me to come to Alberto Sensei’s dojo was like visiting a revival of my youth. This dojo reminds me very much of how dojos used to be, including the function of service to the community.

Alberto Sensei is an Aikido Instructor, but first he is a very active leader in his community, focusing much of his time on implementing educational programs in Cuautla. It is my hope that Alberto Sensei continues his dedication to the community and that his dojo continues as a place important to the community. I was very much impressed by Alberto Sensei and his wife Rebecca’s life style and goals, and for that reason wanted to illuminate their efforts with this article.

While I was in Cuautla, Alberto Sensei and his wife Rebecca Sensei took wonderful care of me as did the hosts of this seminar tour, Fernando Sensei, Rocio Sensei, and our two Mexico entrepreneurs; Mr. Jose and Wimmer. Thank you very much for a wonderful experience.

This visit to Cuautla was sponsored by Nippon Kan’s AHAN which made it possible to donate all seminar proceeds back to the Aikido Cuautla dojo to be used for local community projects.