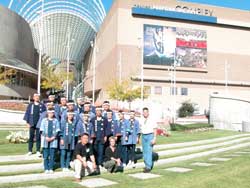 There wasn’t a dry eye as the group said its farewells to Nippon Kan student Jim Bailey who had served as driver and friend for the length of the tour. Jim donated his services for this week-long event and the use one of his company’s fifteen passenger van and trailer. He took precious time away from his family to make time for the sixteen drummers from Matsukawa, Japan, and it was already time to say goodbye.

On the afternoon of September 4th, the sixteen members of the Matsukawa Kyougaku Taiko drumming group arrived in Denver from Nagano, Japan. This was the group’s fifth visit to the United States, but this trip promised to be very different.

The group prepared for months in Japan for the tour, practicing daily. Five weeks before they were due to arrive something happened. The promoter responsible for the group’s activities and performances in the United States cancelled, leaving all of their plans in ruin.

The Matsukawa drummers were familiar with me and Nippon Kan as they had played at the opening ceremony for AHAN in Denver in September 2001. I received a call one evening, asking me if there was anything I could do to help, if there was anyway I could help arrange for them to play in Denver as planned for early September.

I have always tried to avoid stepping into projects that have been left standing still, I did not want to cause any more problems for them and thought that with only five weeks to plan, that they might be better off canceling their plans for this year, and trying for next. Stepping into the middle is a risk, especially with such short notice.

Through continuing correspondence, I could feel the urgency in their request for assistance to come to the United States to play. I began to calculate the risks, both monetarily and logistically to try to arrange concerts for them. Personally I tried to calculate if I could cover the monetary risk if we were not successful.
I decided to take the chance.

To bring sixteen tourists to the US for a week, even with discount airfare would run at least $3,000 per person, I calculated. That meant that the budget for only transportation, lodging and meals would be at least $48,000! Then of course, there was the matter of all those drums!

The drummers were lucky enough to find a sponsor in Japan in the Mitsui Sumitomo Life Foundation, a very large Japanese Insurance company that promised to help with airfare transportation costs. The rest of the expenses were going to be for us to try to cover through proceeds from performances in the US that had not as yet been scheduled.

This was going to be a risky proposition, and took a strong commitment on our part here at Nippon Kan, and a strong belief in the value of the Matsukawa Kyougaku Taiko Drummers to move forward. The reason I finally decided to take this chance I found in the determination and spirit of Taiko- do in Mr. Eitaro Chino, the leader of the Matsukawa group.

Through emails and telephone calls we tried ways to trim the travel budget. We even considered having all sixteen drummers sleep on the dojo mat for a week! We decided that the drummers could bring basic food stuffs with them to help with meal costs, and that we would walk places if we had to!

Our next task was to try to find venues for their performances with very little advance notice time. I warned Mr. Chino that we might not be very success. He responded by telling me “We just want to play our drums, and introduce our Taiko music to American people. It does not matter where we play or where we sleep or if we have to bring our own food, it is our mission to come”. The determination and feeling in his voice was palatable, and as I listened to him I completely made up my mind to commit myself and our resources in helping them achieve their goals.
After I promised our support I felt a sort of panic. There was so little time to prepare. I talked to my good friend Mr. Takayuki Suzuki, President of the Japanese Firms Association of Colorado about our new dilemma the next day. After I painted the picture of this new challenge for him he answered, ”Sounds exciting, lets do it!”. Mr. Suzuki is a skilled businessman, with rare attitudes towards challenges. One time I told him that I was gaining weight and that my pants were too tight. He replied casually “then buy new pants”…

The Consulate-General of Japan’s offered to host a reception for the drummers, and the Japan America Society of Colorado’s managing director and community relations officer Ms. Aya Nakazato agreed to help start getting things organized.
Our next challenge was to find venues for the drummers to perform, and we were extremely lucky to find space for them to play at the Taste of Colorado Festival on Sunday, September 5th, and at the Stage Theater of the Denver Performing Arts Center (who happened to have had a cancellation for Thursday evening) Sept 9th. We also managed to arrange for visits to two elementary schools, and a performance scheduled for Sept 7th in the mountain resort of Telluride, Colorado.

One other person whose help was invaluable in this project was Mrs. Carolyn Kelly, wife of Nippon Kan President of Doug Kelly and media relations coordinator. It was through Carolyn’s talent and experience as a former opera singer in New York that we were able to schedule three live television appearances during the drummers week long visit. Carolyn had also helped with media coordination for the Nippon Kan sponsored Mongolian folk singing concert in 2002 and served as Master of Ceremonies for the performance we managed to schedule at the Stage Theater of the Denver Center of Performing Arts.

Nippon Kan members rose to the challenge with schedule planning and staffing. About 30 members of Nippon Kan donated their time to staff the week of events in every capacity from reception, medical and security personel to banquet reception. The behind the scenes work went very smoothly. We also extend our many thanks to the DPCA Staff and the Staff of the Taste of Colorado. Everyone did an outstanding job.

Once again, the Art Institute of Colorado came to our aide, and under Associate Dean, Academic affairs Bob Studinger’s supervision two videographer instructors, Thor Metzinger and Todd Debrecini donated their time and equipment to follow the week long tour for filming. In all, over 22 hours of raw footage were shot. The AIC staff is now in the process of trimming down this footage for a documentary that should be ready sometime soon.

As always, in the thick of the fray was Nippon Kan Vice President and AHAN President, Emily Busch who worked well into many nights to translate and organize minute by minute schedules for the many teams to follow. She also accompanied the drummers while they were here, serving as guide and translator for the group. As usual, due to her planning every thing went off (almost) like clock work.

Between all of these events held in Denver, the drummers and all of their drums were loaded onto a slightly too small bus to head out for the seven hour drive to Telluride, Colorado. There they were to perform for over 500 local Telluride residents at the theater of the brand-new Telluride High School. The concert in Telluride was sponsored by Koto Radio and coordinated by Rick Thompson, Chief Instructor of Nippon Kan affiliate Telluride Yama dojo.

Fighting jetlag, fatigue and high altitude the drummers enthusiastically tackled this schedule and left each audience, from elementary school children to DPAC patrons with memories of extraordinary performances. No one was disappointed, the power of the group surpassed everyone’s expectations.

As the week wound to a close, a thank you party was held. At the party, Mr. Chino, the leader of the group, gathered all sixteen drummers together to lead a toast. “We could not have done this by ourselves” he began. “There needed to be a bridge, a bridge that spanned between the two cultures of Japan and America. We usually give accolades to the countries on each side of the bridge, for the destination of the crossing is what is deemed important. But we must look at the bridge itself and the strong pillars that support this connection between cultures”.

His words touched me deeply. Living in the United States for almost 30 years, sometimes I feel I have missed so much of my life in Japan. These words of appreciation brought meaning to the actions of the last decades of my life. It was a confirmation of identity for people like myself who have lived outside of their own country for a long time, and was a gift of words I will always treasure. There were many Japanese, Japanese Americans, and Americans living here in Denver who helped to make this week of concerts an experience that will not be soon forgotten. Many of those were “pillars” in the bridge that extended between these two lands.The sound of the Matsukawa Kyougaku drums made my spirit fly; they had that kind of power. Even their name speaks of their power. The “kyou” in Kyougaku means to vibrate or echo. The “gaku” in Kyougaku means the tops of the mountain peaks. Like their name, their music soared over our Rocky Mountains, touching everything in their path, moving people as one beyond borders, nationalities, races, religions, or age. Everyone was touched who heard them, everyone joined however briefly in a human harmony.

In their drumming, the drums, the drum stands, and the drumsticks join with precision to create incredible vibration. Each player gave so much of their hearts that their drumming touched the hearts of those who heard them. I watched as audiences stood clapping for ovation after ovation. At that moment I could feel the power of the drummers and the mysterious connection between the drums, our nature and the earth that bears us. We were lucky, and as it turned out, the group did not have to sleep on the mat at the dojo, although we did use much of the foods they brought with them. We even had enough of a budget for a modest thank you party at the end of the tour.

On the morning of September 11th, we stood on the bride above security at the airport and watched all the drummers prepare to descend down the escalators to the concourse trains below. The sixteen gathered together in a group below us and as they stepped onto the escalators they bowed together, until we could see them no more. As they disappeared into the crowds below, Jim Bailey moved quietly to turn his van toward home. There were no more passengers in the seats behind him, but above and below the Marine Corp sticker on the rear window of his van are two stickers now in red which reads Kyougaku Taiko Drummers, Nagano, Japan. 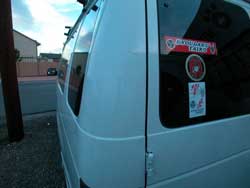 On this September 11th, the flag at Nippon Kan flew at half-mast. Somewhere up above a plane flew overhead, heading home. The mission of the drummers was a hope for peace and human harmony. This was the message in the beating of their drums, a message that was a great gift to receive.

SHINANO NO KUNI MATSUKAWA KYOUGAKU TAIKO speaks to the future of relations not only between Japan and the US but the future of relations in our world. daikodo, is the way of the Japanese drum. Play hard my friends, I said as I watched the plane in the air disappear from view, we hope that your drumming is heard around the world.
Thank you very much to all of the sponsors and staff that made this dream a possibility.