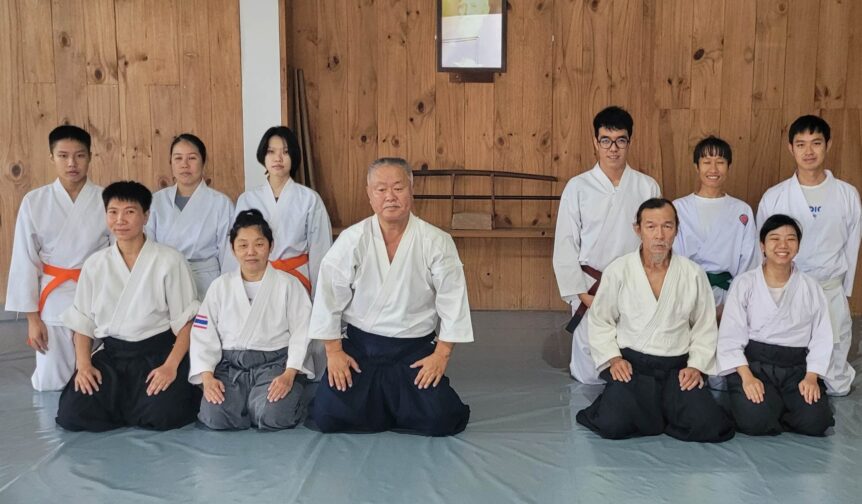 Before talking about it…

I met her for the first time in Oman, an Arabian country located in southwestern Asia.  She had been invited to the Islamic state by a highly influential local person to stay in the country for a long term to teach Aikido to local women and children.  However, she had to come back home due to the outbreak of COVID-19.

Her name is POM Sensei (Miss Rakchanok Chayutkul).  She has a dojo, called AI-Dojo, with a few of her fellow Aikido-ka, in Chiang Mai, Thailand.  The dojo is not for Aikido of AI (Artificial Intelligence) technologies, no matter what Artificial Intelligence is or even if such a thing even exists…  The “AI” of the dojo’s name comes from the Japanese word, “AI (愛)”, and the name of their dojo is reflective of their thoughts and attitude.

I paid them a visit as a show of my appreciation for their willingness to have taught, at my request, orphans from Myanmar as volunteer Aikido instructors.  While their dojo was admirable, it didn’t take me long to realize, given my own experience of having managed a dojo for a long time, the scale of their dojo was not large enough to support the livelihood of a few managing partners.

I had been told that POM Sensei would not be at her dojo when I would visit the dojo.  I found out later POM Sensei was in a sugarcane field of 8,000 acres during a harvest season.  She was working with a group of seasonal workers to harvest the crop for 4 months.  During the harvest season, it’s inevitable for her to be away from practicing Aikido, which she very much likes and to which she highly devotes herself.  While the work must be physically tough for her as she is not a big person, she must be benefiting from the harvesting work every day to stay fit.

The Founder of Aikido had taught the late Morihiro Saito Shihan, “You must not teach Aikido if you have to worry about how much rice there is in KOMEBITSU.”, and not only the teaching was passed onto me by him, but I also have been living by the teaching.

Since it’s rather a rarity for instructors to be able to make a living by teaching Aikido only, it’s not seldom that I come across dojos and organizations which have evolved to hold kyu/dan promotion tests and/or seminars quite frequently so as to keep raising the amount of revenues to continue growing, and it seems instructors in such organizations are often competing against each other to climb to the top layer of their organization by focusing on saving their own skin, and as a result, it also seems their Aikido has rather become closed and gone around in circles.

While it’s not seldom that I come across young instructors who are called “Sensei”, who assert, “Aikido is my life!” although they teach Aikido only for a few hours a day and who often cannot do anything other than teaching Aikido only for a few hours a day, I always feel humbled and impressed when I come across young Aikido-ka who continue their endeavor passionately to pursue, with their dedication and commitment, their own ideals of a dojo by working hard outside their dojo to support themselves and their dojos.

According to the late Morihiro Shihan, “Nou (農; farming)” was about producing food to sustain the dojo in Iwama during and after the war, and the self-sustaining way of life contributed greatly to provide food to Aikido students who had come home from the front lines of war zones after the end of the war and who later became high-ranking instructors.

The tradition of “Buno Ichinyo” had continued throughout when I was at Iwama, and Hitohira Saito Sensei, the founder of Shinshin Aiki Shurenkai and a son of the late Morihiro Saito Shihan, has not only been living by the way of life but also been an avid and dedicated guardian of the tradition at Iwama.

While it’s difficult for anyone to lead such an Aikido Life, in which we perspire by working the land while appreciating what Nature gives us in return for our hard work, in the modern society we are part of, especially so, I think we need to put a spotlight on dojos with instructors with the attitude mentioned above when we encounter them so as not to forget them.

And one of such dojos is AI-Dojo.  Most of the leaders of AI-Dojo are graduates of Chiang Mai University, a top tier university in Thailand, and POM Sensei, who has a bachelor’s degree in animal science and agriculture and a Master of Science degree in biology from the university, is one of them.

Even when the basic rules of the dojo are the same as those of other dojos, the overall attitude of the leaders at the dojo toward the practice of Aikido is rather open than closed off , and I think they are standing on a vantage point to continue exploring Aikido from both an academic and a social perspective.

Chiang Mai in Thailand is also a famous tourist destination.  If you are an Aikido-ka and if you ever have a chance to visit Chiang Mai, it’s highly recommended for you to visit AI-Dojo.

When doing so, the most important ground rule is for you to remain as “a likable visitor” to the dojo and its members throughout your visit with them by accepting the way the Shidosha (instructor) in charge at the dojo to teach a class during your visit, regardless of your affiliation, your organization’s style or your own skill level.

Another ground rule is for you to pay the class fee set by the dojo.  In most instances, fees collected from visitors are put to good use to support the dojo and/or the local community of which the dojo is a member.

AOM Sensei (Miss. Ratchadaphorn Siriwong) is also active in various initiatives at this dojo.  Along with POM Sensei, I would like to introduce you, the readers, to these wonderful Senseis.