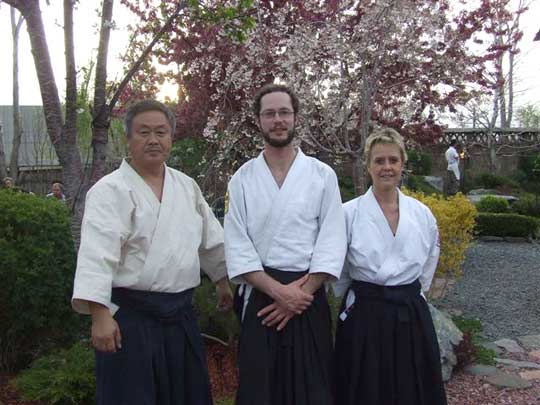 John Grotrian, a native Canadian graduated from an extended six month term from Nippon Kan’s uchideshi program on February 23rd, 2007. John performed well as an uchideshi with a good attitude and aptitude for Aikido on the mat. John showed potential as a beginners class instructor, and with his interests in spiritual studies Homma Kancho nominated him as a candidate to teach beginning Aikido basics in Nepal for newly formed Aikido Nippon Kan Nepal Aikido Club for a three month period. John has been working with the group actively sine February and a full report on Nepal Aikido Club activities will be presented in the next activity report.

James Wolff, a native from Scotland graduated from a three month term as a Nippon Kan uchideshi after completing 100 ukemi (as did John) at his graduation ceremony April 20th, 2007. Students cheered him on with a big round of applause as they sent him off on his next adventure; a visit to Argentina.

Jim usually left the dojo well before 8:00 am each morning to walk to the nearby Auraria college campus to work on his studies, retuning in the early afternoon to complete his chores and prepare for daily practice. Jim was a good organizer and completely all of his tasks and duties with proficiency. Jim was also quite talented with computers and worked on refurbishing the used computers for AHAN’s computer redistribution program. He also participated in other AHAN activities and projects such as the homeless meal service at the Denver Rescue Mission.

Jim participated in a daily uchideshi practice before attending three classes per night with regular attending dojo members. Also after practice there were certain social requirements which I hear Jim was quite proficient in as well; especially in the scotch and haggis category! 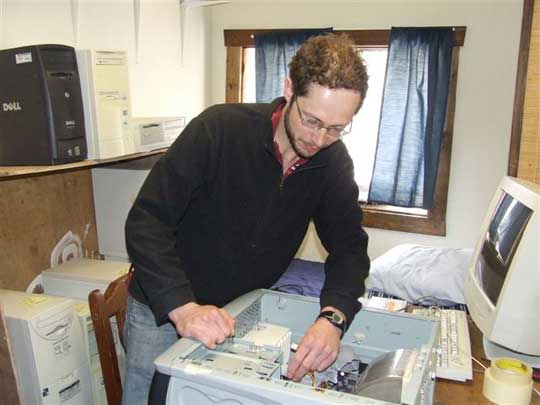 At the graduation ceremony, Homma Kancho told students that Jim had been an “easy” uchideshi. This meant that Jim was independent, followed direction well and could think for himself of ways to improve the tasks and chores he found before him.

We have had many different uchideshi at Nippon Kan, and not all of them have had the abilities that Jim has. There have been some uchideshi that even if you give them a little push, they do not move. There have been others that don’t need a push to move and even take the next steps forward on their own. Simply, successful uchideshi training cannot make a person move forward if they cannot take the first steps themselves. Some think that that is what uchideshi training is all about, but truthfully, people who are able to move without being pushed are the ones who can and do complete the program successfully. The students who become members as alumni uchideshi came to the program with the skills to move forward on their own. Those that have the idea that becoming an uchideshi will teach them inner resourcefulness and self reliance are the ones that fail. The uchideshi program is comparable to a twenty four hour a day graduate level program. If you have not graduated from high school on your own, you will never be able to survive the program. Uchideshi must already have basic skills and aptitude before joining the program to be able to graduate.