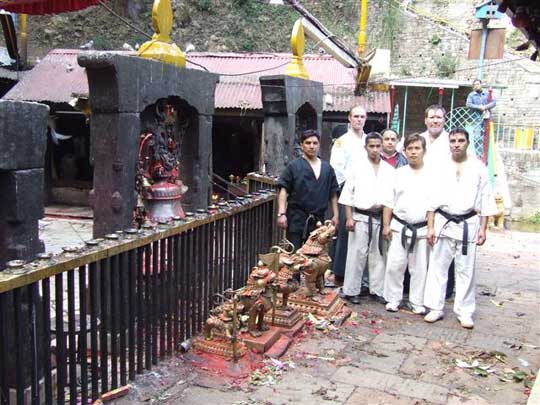 Hindu temple outside of Kathmandu with future Nepalese leaders.

In Nepal, February is a time for celebrations and festivals as everyone prepares for the coming Holi spring festival. It is custom in Nepal during the Holi festival to splash water on those around you with your fingertips. 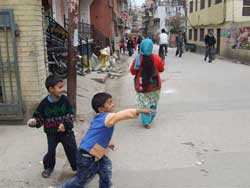 Kids throwing water as part of the festival. 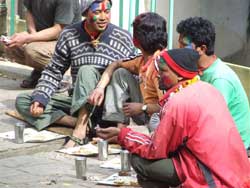 Aikido Nippon Kan Nepal, officially registered with the government as Nepal Aikido Club, is organized by President Mr. Sitkar Rajbhandari and a very active board of fifteen members. Since its formal inception in 2006 the club has grown steadily and in December of 2006 we made a request for a formal instructor from Aikido Nippon Kan Headquarters to come to Nepal to assist us in our training. 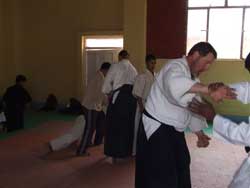 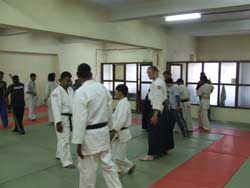 In Nepal, Karate, Kempo, and Tae Kwan do; many of the competitive martial arts are all very popular in Kathmandu but until now there has been no Aikido. We believe that Aikido technique and philosophy are completely different from these other striking martial arts and will fit well with the philosophy and religious nature of the Nepalese people. We are very much looking forward to bringing Aikido to Nepal! 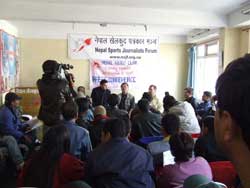 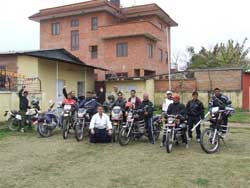 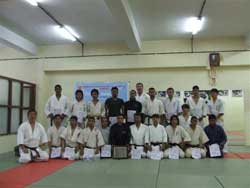 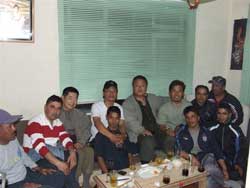 Student and staff relaxing a bit after class

While he was here, we arranged a press conference for Homma Kancho and over thirty reporters came to do interviews. It was good exposure for this new art of Aikido in Nepal which we hope will continue well into our future.

Homma Kancho also visited the Drubgon Jangchub Choeling temple ministry outside of Kathmandu to pledge his support and to learn a tip or two about cooking methods. Homma Kancho is studying to put together a new menu for new restaurant in Denver. 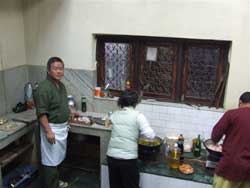 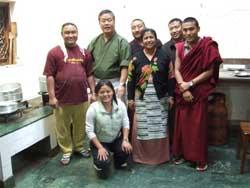 The political situation in Nepal is settling down except for in isolated remote areas. Kathmandu is peaceful at this time but still suffers with electrical shortages and general strikes that make life inconvenient but manageable. The young people in Nepal, no matter what the political conditions are will continue to practice martial arts very seriously and diligently. Thank you Nippon Kan General Headquarters for your support.