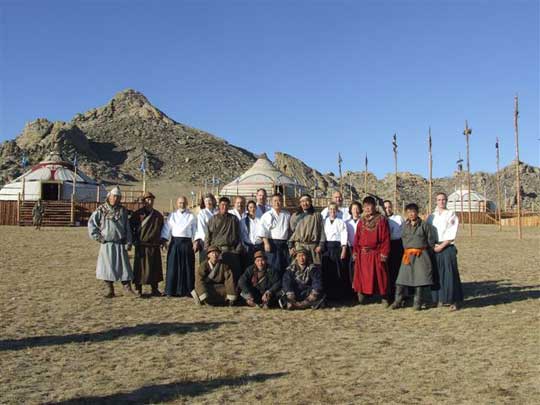 After the AHAN seminar in Korea had drawn to a successful close, Homma Kancho, Stephanie Yap Sensei and the Nippon Kan AHAN entourage flew from Seoul to Ulaanbaatar, the capital city of Mongolia. The purpose of this visit to Mongolia was to attend a Nippon Kan General Headquarters-sponsored Mongolia Aikido Seminar and to work on a variety of AHAN Humanitarian projects.

The Mongolia Aikido Seminar was held at the Mongolia Japan Center and attended by students from two Aikido organizations in Ulaanbaatar who joined together for this special event. Stephanie Yap Sensei was the featured instructor, teaching morning and afternoon classes on October 13th, 2007 for all attending students.

Like Korea, this was the first visit from a professional woman Aikido Instructor to teach in Mongolia and all attending students and instructors were enthusiastic about Stephanie Yap Sensei’s energy and powerful teaching technique. 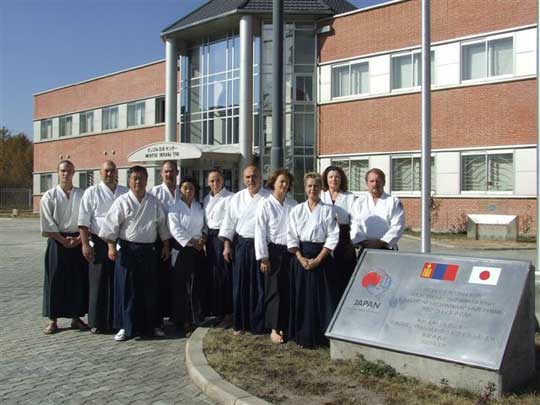 In front of the Mongolia JapanCenter where the seminar was held. 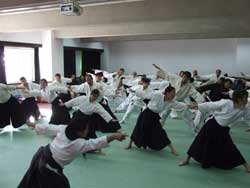 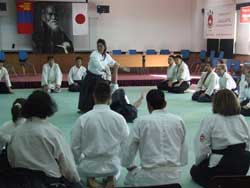 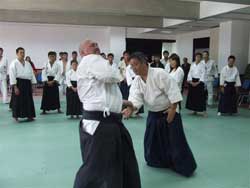 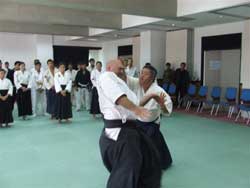 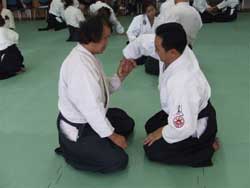 Instructor Altanbagana on the left, Instructor Bold on the right. 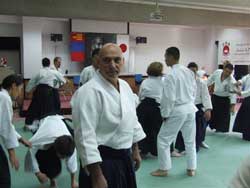 The AHAN projects in Mongolia this trip were multifaceted. One purpose was an exploratory mission to study Mongolian Ger camps (Mongolian traditional camp resorts) for possible future development in Canada and Southwest Turkey. More information on these developing projects will be announced in future Nippon Kan website updates. The AHAN tour experienced the wilds of the Mongolian countryside with a one-night stay in a Ger camp outside of Ulaanbaatar. We also further explored Mongolian culture and history with a visit to a 13th century living history village.

On this short but busy visit to Mongolia, we were able to visit many people thanks to Homma Kancho’s long-standing relationships and network of connections built over the years.

On the day before the seminar, Homma Kancho had an afternoon meeting with hotel and resort mogul and Member of Parliament, Khaltmaa Battulga.  Mr. Battulga is also the President of the Mongolia Judo Federation and an avid supporter of the martial arts in Mongolia. Homma Kancho and Mr. Battulga discussed future plans to implement an Aikido program in Judo dojos in Ulaanbaatar and other parts of Mongolia. 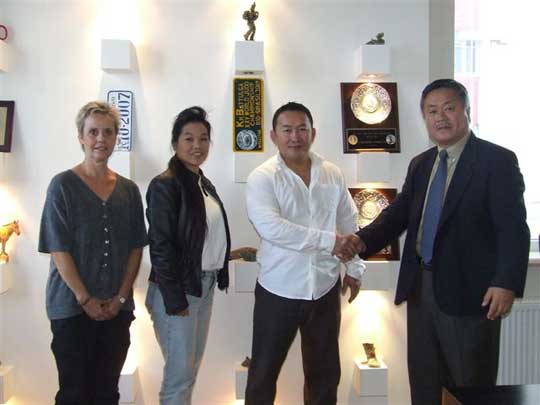 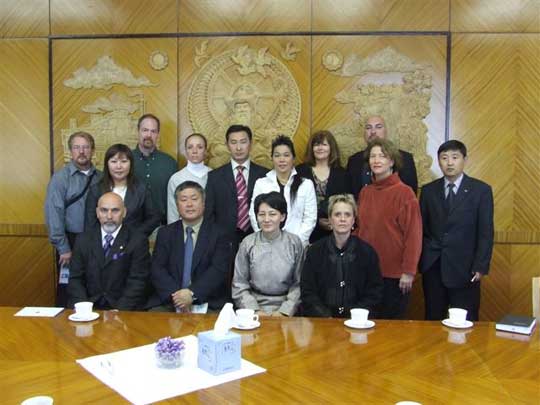 Before this busy day came to an end, we went to Gandan Temple where we had a private audience with Choijamts Hamba Llama the highest Buddisht priest (llama) in Mongolia. The Hamba Llama and the Gandan Temple are very well known in Mongolia for their active approach to education and other social services to the Mongolian people. Choijamts Hamba Llama visited Nippon Kan headquarters in the US with the President of Mongolia on a trip to meet with US President Bush in 2005. AHAN Nippon Kan Headquarters has donated over thirty refurbished computers to the Gandan Temple educational facilities. 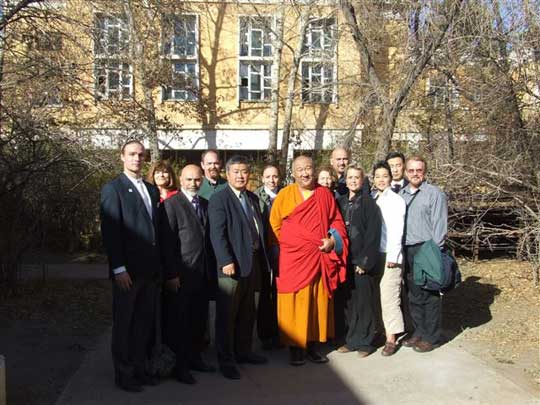 With Hamba Llama Choizants at the Gandan Temple. 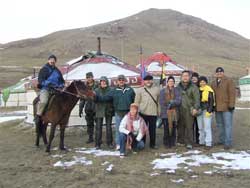 Overnight in the Ger camp. What an experience! 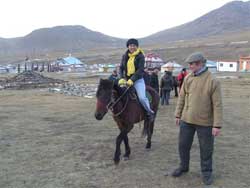 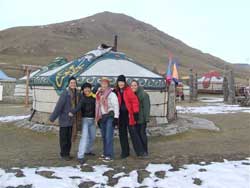 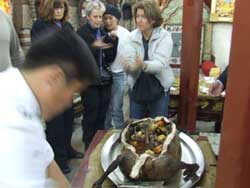 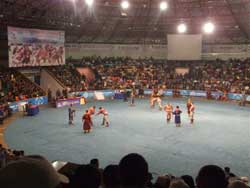 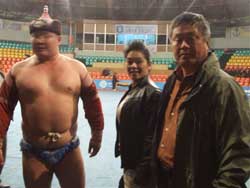 Inside the Gandan Temple complex, in a windswept corner of the square, stands a tree and a small wooden monument. On the monument written in Japanese is a memorial dedication to Onisaburo Deguchi, Founder of the Omoto Kyo religious sect for the 80th year anniversary of his visit to Mongolia. The tree was planted and the monument erected in 2004.

It is written in our Aikido history that Onisaburo Deguchi came to Mongolia with the Founder of Aikido, Morihei Ueshiba. Actually Onisaburo Deguchi and the Founder Ueshiba never made it through the border between China and Mongolia; they were both arrested on the Chinese side of the border. Therefore, the premise for this memorial tree and monument is not based in actual fact. It has been confirmed by Mongolian historians that the Reverend Deguchi and Founder Ueshiba were actually acting as intelligence agents for the Japanese Military (Tokumukikan) in the Japanese attempts to take over the country of Mongolia militarily.  This truth be known, sometimes it is better to let lie. Maybe the memorial post should be written as a memorial dedication of the 80th year anniversary of Onisaburo Deguchis ATTEMPT to visit the country of Mongolia. Better just to leave this one alone…. 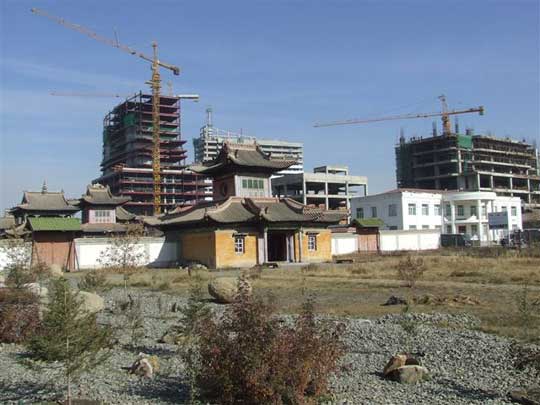 A building boom in Ulaanbaatar. Mongolia must be mindful and
protective of it’s past as they move on toward the future.