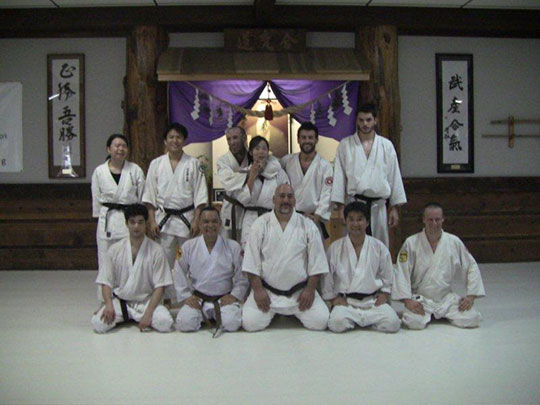 The annual Nippon Kan General Headquarters Summer Marathon this year consisted of 40 days of continuous practice. The marathon seminar is part of Nippon Kan’s 3 month summer uchideshiprogram that is attended by young Aikidoka from all over the world. A total of well over 900 hours of practice were completed at this seminar by attending students and uchideshi.

It is common for Aikido seminars instructed by high-ranking Japanese Istructors to be held for 3 to 7 days. Homma Kancho’s philosophy is a little different. Says Homma Kancho, “Training under a high-ranking instructor for a few days might be interesting but it will not change your Aikido practice technique. These kinds of seminars are held more for name value and status than for actual long term assimilated learning. I too have invited well known high-ranking instructors from Japan, but most of the high ranking Japanese shihan from the days of the Founder have now passed on. The shihan that remain are of a very high level and very expensive to host. If I am going to spend that kind of money, I think it is more valuable to sponsor young, active and strong Aikido instructors from all parts of the world to come to Nippon Kan Headquarters to practice with Nippon Kan students for an extended period of time. There is value in the level of practice energy at the dojo, exposure to students from different nationalities and backgrounds and a great means of communication and cross cultural exchange. From all angles, I think it is a much better investment for all students”.

This year, from all of the applications submitted, the top 10 scholarship uchideshi were selected from the USA, Italy, Japan, the Philippines, Spain and Nepal. Watch the video below:
“Aikido Marathon Summer Uchideshi Training 2014”

For the uchideshi candidates selected for the marathon, 50 to 100 % of their airfare and 100% of their class fees, lodging and food was paid for by AHAN. Homma Kancho instructed classes daily and also cooked all of the meals for the hungry band of uchideshi this year. Homma Kancho is also famous for his culinary skills as Domo Restaurant’s owner and head chef and the dishes he prepared disappeared quickly with the uchideshi around!

Nippon Kan members attended the summer marathon at no charge. Donations were accepted by student choice and about $5000.00 was raised in the AHAN donation box for use in AHAN children’s overseas rice donation and support projects. 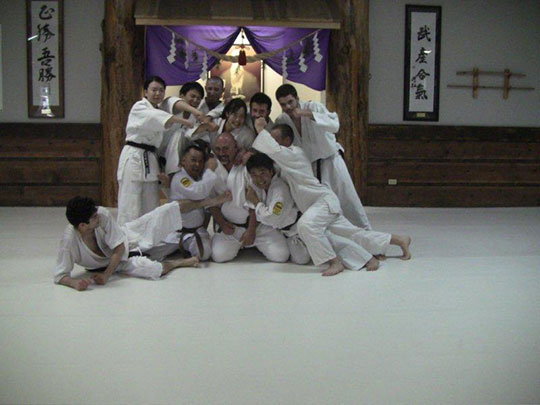 All uchideshi and Barrera Sensei- Last day of marathon tradition!

This year too, the physical training classes for the uchideshi were instructed by Nippon Kan Official Instructor Michael Barrera Sensei. The “classes from hell” ( as nicknamed by the uchideshi) were held 5 days a week during the summer marathon seminar. Many thanks to Michael Barrera Sensei for sacrificing so much of his time and expertise to teach these special uchideshi classes.

We will introduce all of our 2014 Nippon Kan Summer Marathon uchideshi in the Uchideshi News section of this activity report update.