Photo 65 Large cimg 7939 Pastor Bilay before evening prayers at the Bilay House Chapel
Quick visit in June to the Bilay House to check on operations; living conditions, food supplies, any health concerns, educational programs and activities. All of the children seem to be doing well; going to school, doing their chores, following the rules and very enthusiastically enjoying sports. 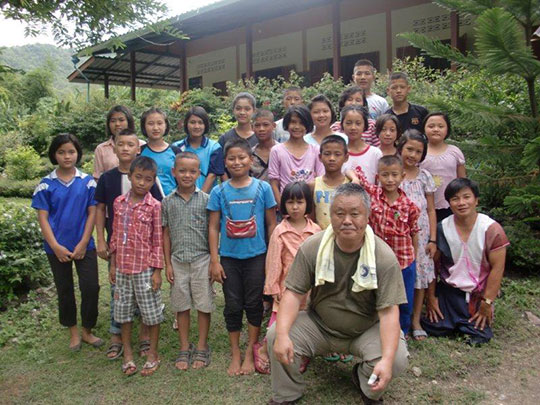 All of the children are growing up! 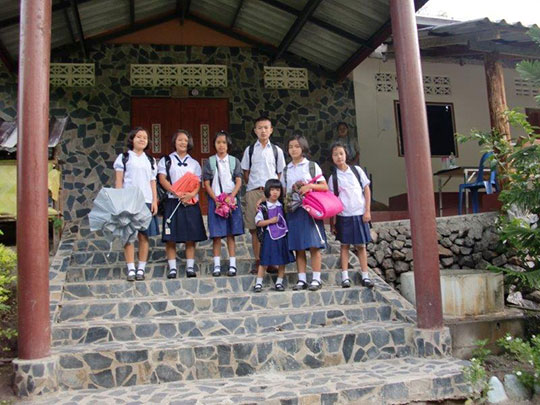 A group photo before school 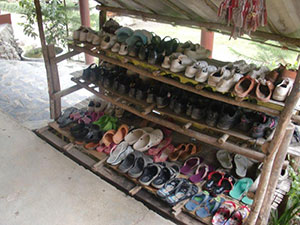 Organized shoes, everything in order! 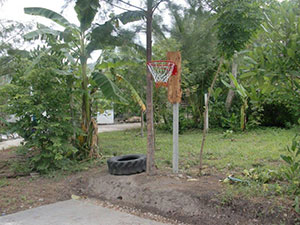 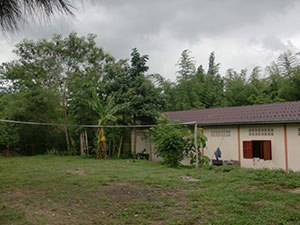 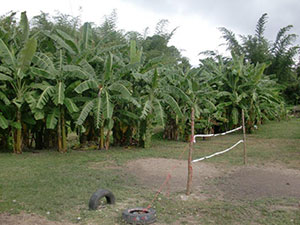 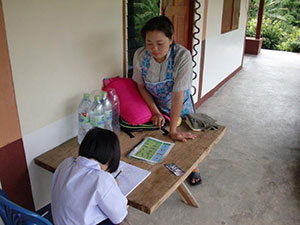 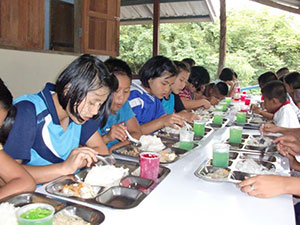 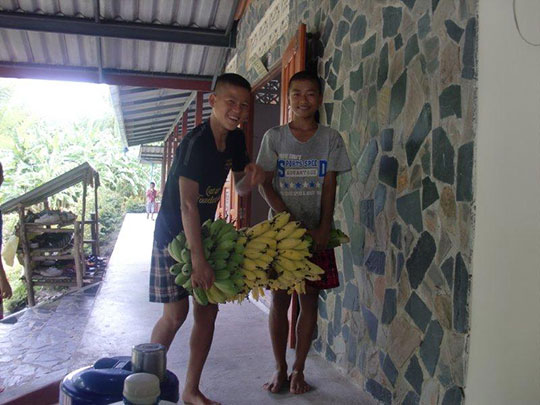 A good harvest of bananas from the garden

After the two day visit to Bilay House, the next stop was Viet Nam. My destination was the city of Hue which lies near the old border between North and South Vietnam. This was one of the hardest hit cities during the Viet Nam war and still shows the scars of massive damage and human casualties. 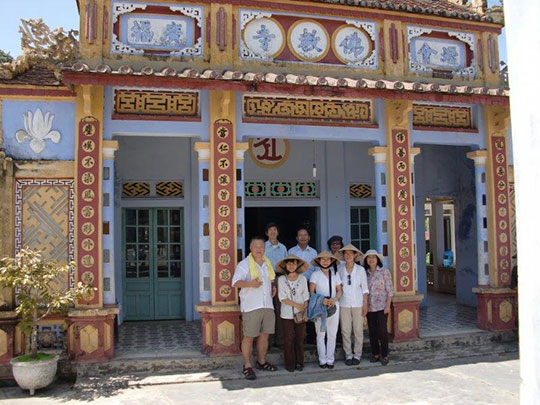 Volunteers in the city of Hue

There is a national heritage site near the center of the city which contains the Dai Noi Castle. It was here at this castle during the war that young soldiers made their stance, chaining machine guns to their bodies and fighting until the end. Many soldiers died, having fallen still chained to their machine guns.  I was told this story by Nippon Kan Headquarter staff member Mr. H ,who witnessed this battle first hand. He was born and raised in Hue and now lives in Denver.
In Hue, there are small groups of volunteers made up of retired teachers etc. that work with families that were affected by the Agent Orange that was used in the war as a defoliant. These families poisoned by contaminated water or foods, had children born with birth defects and disabilities. 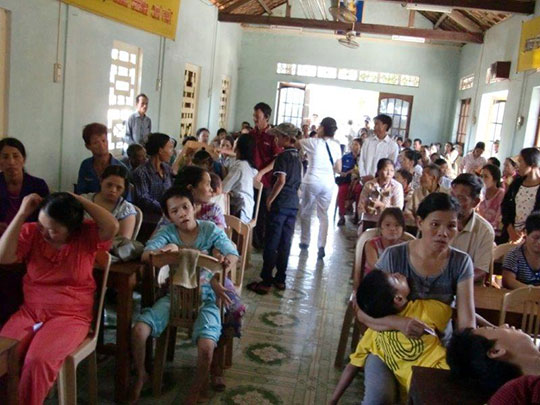 The caretakers too are getting old 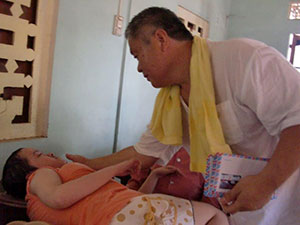 In many families the effects of war still linger 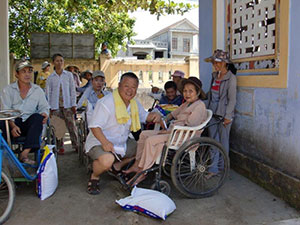 A very hard life but never forgets to smile 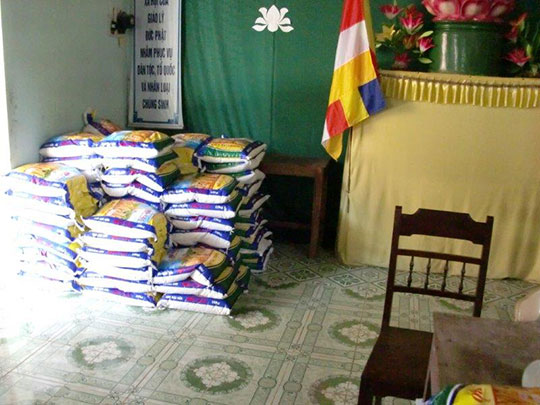 Allies that used Agent Orange in the Viet Nam war have already compensated the Viet Nam government for damages so this debt may have been paid politically. This however is not the time to start this discussion. The damages to the people of Viet Nam still lingers; decades after the end of the conflict on the ground. The group of volunteers I met in Hue, selflessly continue to care for the victims still suffering from the war fought so long ago.

I had heard of Agent Orange but to see the effects first hand affected me personally. Seeing the aging parents and their children born disabled or with birth defects from Agent Orange was saddening. It was such a visible reminder of how long the effects of war can linger. I saw one elderly mother who had difficulty moving her own body as she struggled to carry her now grown son unable to walk at all. There are no words…

In many countries, humanitarian support is restricted to government run organizations only.  In my direct experience I have found that to be true, especially in the countries of Viet Nam, East Timor and Bangladesh.  Private humanitarian organizations in many countries can be fraudulent and for the proprietors quite lucrative so I can understand the government concern. Some of these government run humanitarian organizations NGO however are not much more ethical or honest than their private run organizational counterparts. In Bangladesh for example, one of our AHAN staff attempted to set up an official relationship with the NGO ministry. The first question from the official in charge was, “and what will you do for me?”

Working with AHAN Nippon Kan projects internationally I have seen an industry of fraudulent humanitarian organizations especially in countries like Mongolia, Laos and Cambodia. In Myanmar, East Timor and countries in Central America, aid received from foreign countries after political or domestic clashes or natural disasters in many cases benefit only the organizers and not to those in need. For this reason I spend a lot of time researching projects before AHAN ever becomes involved. Sometimes I have even observed a projects organization under cover.

The volunteers I met within the city of Hue were recommended to me by one of my students. The program that they are involved with however is a government program with many rules and restrictions. Not wanting to violate any of these government restrictions or rules, AHAN has decided not to support this project in Hue long term while our research continues.

There was one more tragic result of a history of war that I witnessed in Hue. It is not uncommon for many children to become orphaned during wartime if their families are killed in the war. In Viet Nam however there was a serious problem of babies born of local women that were used and misused by allied soldiers. With fathers that shipped out and mothers unable to care for these children, many children of mixed heritage also became orphans of the war. This was especially true in areas where the fighting during the war was the fiercest.

These children are called ‘dai la han” although they are not children any more. They live as outcasts in their own society and suffer from discrimination from both sides.

I had been asked by a human rights organization to research war crime claims in the village of Tai Bin. In this village there is a memorial to a massacre that happened in this village by allied troupes on the village hami or gates. The gates are decorated with mosaic murals made with small tiles. If you look closely you can see the images of patches on the soldiers uniforms; images of tigers and other allied military symbols.

I am not sure why the Vietnamese people do not complain more to the international community today about allied involvement in such merciless destructive behavior. One reason might be that even in higher level university education; these parts of Vietnamese history are not being taught to the next generations.

Any war is gruesome and crazy things happen in war but to hide the destructive actions of one’s own country and complain about the other is not right. If you have ketchup on your own face you cannot laugh at the ketchup on someone else’s face. My new Vietnamese friends laughed when I used this example to talk about this international problem between countries.

Mr. H escorted me to the Thua Thien gymnasium in Hue where I dropped in on the local Aikido class. It was already evening and still so hot outside that I was dripping sweat just standing still. I watched a large Karate class performing kata outside on the grounds and there was a small group of about 15 students practicing Aikido inside. I wanted to stay and watch for awhile, but it was so hot and humid that evening I surrendered to the heat and returned to the hotel. I was impressed; the local people here  are very resistant to heat and humidity! 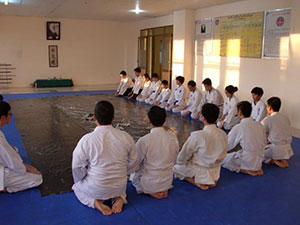 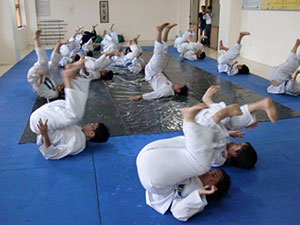 Everyone practicing hard in Hue 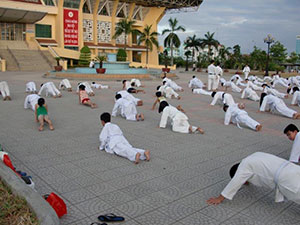 Karate practice outside in the heat and humidity. 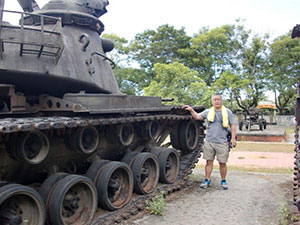 Symbol of war; a US tank long abandoned- for the Vietnamese, a symbol of victory

The volunteer group I met with in Hue is called Bac Siey, named after Master Siey, a famous Vietnamese human rights leader in Vietnam. I thank you very much for your hospitality during my visit to your city of Hue. 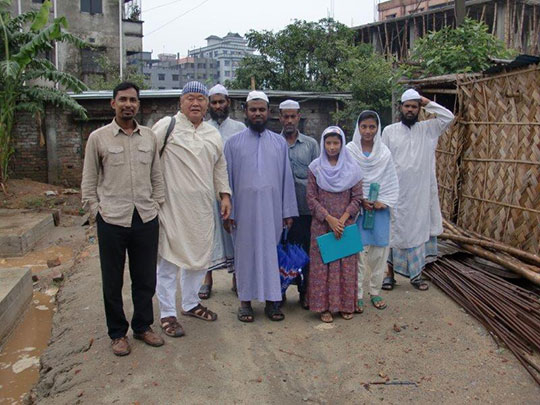 With teachers in front of boy’s school construction site

Bangladesh is the same as usual. For the past ten years I have been coming to Bangladesh and the people have always been so gracious and kind to me. There has basically been little change however or signs of improvement in the lives of the people in Dhaka in all these years. From the window of my hotel, I can see the street and sidewalks below. Every year there have been displaced people living on the sidewalk across from my hotel and if anything their numbers have grown and their camp expanded.

Downtown Dhaka has many new shiny buildings and there are way too many cars on the road, but the divide between rich and poor seems wider than ever. There are private schools for the children of the wealthy, but the care for the poor, abandoned children is left primarily to the Islamic mosques and Buddhist monasteries in the area. For a child of little means, they are very lucky to go to any kind of school at all.

AHAN Nippon Kan supported the building and cares for the Madrasa School for orphaned girls where over 350 girls age 7-16 go to school. 300 of these girls live at this school, built by AHAN in 2010.  The girls do receive an academic education but religious education is a central focus.  Here at the school, the girls have classrooms for learning, a place to sleep and food every day. For these girls this is the safest place that they could be. Currently AHAN supports this school for girls with 750 kilos of rice per month and additional educational supplies. AHAN is also supporting the construction of an orphanage school for boys next door to the current girl’s facility. This project is still in the beginning of its construction phase.

In current international news there is worry and suspicion of the Islamic community through terrorist activity. Some might be concerned about AHAN support of this Islamic based project. We understand the worldwide concern against terrorism but these are the issues of only a few; not the entire world community of Muslim people.

Our support is for the children, the girls that are receiving care at this facility. We support their well being and education and will continue to do so at this facility in Dhaka Bangladesh. 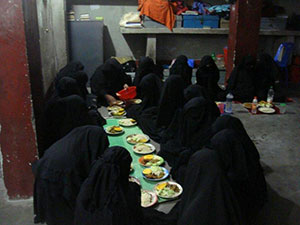 At the closing of Ramadan, the upper grade girls celebrate with a special meal. 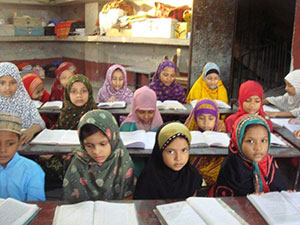 Girls in primary grades studying in their classroom 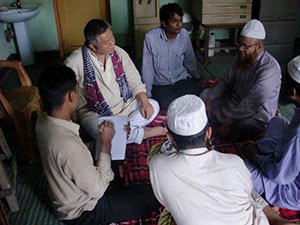 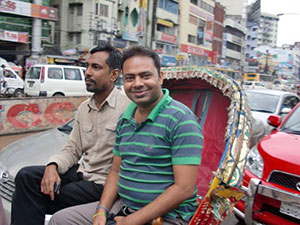 During this visit, AHAN Bangladeshi Coordinator Maji Sarkar and his assistant Ratan (the barber) took very good care of all of arrangements, transportation and hospitality. Maji’s father is a Retired Deputy Secretary of State of Bangladesh and has always been very supportive and understanding of our efforts in Dhaka. The Sarkar family owns the Sealand Hotel where I always stay when visiting Dhaka. Thank you all very much.