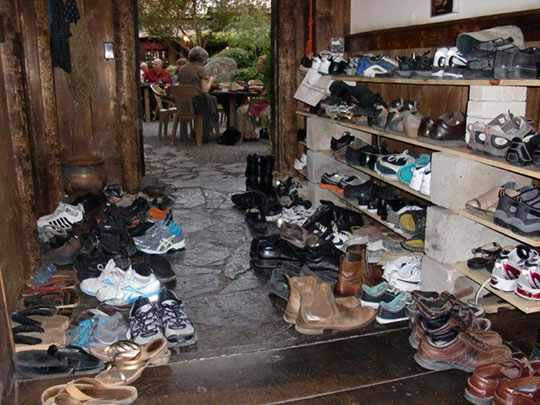 So many Ito Cup guests, no room for shoes!

Aikikai Headquarters in Japan distance themselves in their records of the relationship between Aikido and Kendo, but this important relationship is intrinsic to our Aikido history.

Kiyoshi Nakakura,  Kendo’s Hiromichi Nakayama’s deshi actually married into the Ueshiba family when he married Aikido Founder Morihei Ueshiba’s daughter Matsuko. The marriage lasted 5 years, but during that time Kendo was practiced regularly by Fouder Ueshiba at Hombu dojo in Japan. Homma Kancho even has a photo in his collection of Kisshomaru Ueshiba (Founder Ueshiba’s son) wearing Kendo protective gear during practice.

At this US Kendo Tournament, one of the woman organizer’s grandfather was Baron Gonbe Yamamoto who served two terms as Prime Minister of Japan. Yamamoto invited Founder Morihei Ueshiba to Tokyo to introduce him to reigning Japanese royalty of the time.

There is much about the Founder Ueshiba’s life that has been eliminated from the “official” historical records of his life by Aikikai and it was interesting to learn a little more about the life of the Founder at this Kendo tournament in Denver.

This US Kendo tournament is held every other year in the US and this year was held in Denver. It was an exciting tournament this year, and the reception was held at Domo Restaurant. Over 150 guests attended from all over the United States and Japan.