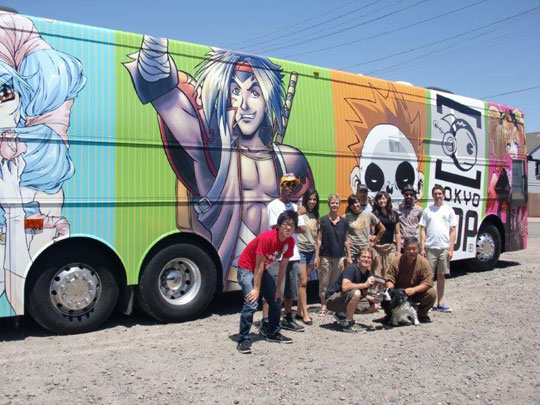 Japanese anime, cosplay (costume play) and otaku have all become quite popular in the United States and recently the Nippon Kan office was contacted by “Tokyo Pop” staff seeking to film at Nippon Kan for an upcoming special on the “Best Otaku in the USA”. Some of the younger Nippon Kan staff thought this was very cool and most of the senior staff had no idea what this meant. Obviously we had a generation gap in our Nippon Kan office…

I was one of the ones that was not sure what this was all about, but the Tokyo Pop filming crew arrived that Sunday ready for filming. They interviewed me on camera, filmed Aikido practice and lunch served at Domo before the filming day was done. Just as quickly as they arrived, the crew drove away in a huge anime-character painted bus…like rock stars heading for the open road.

One of our younger members excitedly reminded me that “Tokyo Pop” was very big in Hollywood and had fans all over the world. This Tokyo Pop, otaku filming and production crew, I was told, was one of the largest and most popular in the USA.

I am still not quite sure why they chose me and Nippon Kan to be included in their “Best Otaku in the USA” documentary. To find out more about what otaku is, maybe try Wikipedia.http://en.wikipedia.org/wiki/Otaku

An interesting day, but definitely not my world…