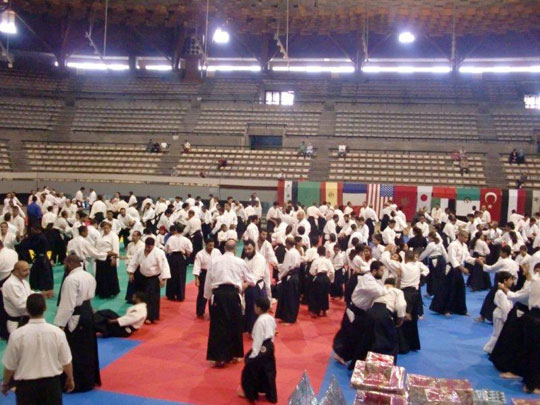 About 1000 aikidoka attended this seminar sponsored by the Royal Maroc Aikido Federation under Chief Instructor Alaoui M’Barek Sensei. This Islamic Aikido Federation seminar was the second seminar this year I have instructed in Casa Blanca. The seminar was held at the Mohammed V Sports Arena and attended by Islamic students from all parts of Morocco, the neighboring Islamic countries of Iraq, Libya, Saudi Arabia, Algeria, Nigeria, Egypt, Turkey, Yemen, Syria, and Spain, France and the USA.

In the world today, there are many Islamic aikidoka practicing in many countries. The technical level of  students at the seminars I have attended in this region is quite sophisticated and all students are in good physical condition. Suwarewaza (kneeling techniques) are well practiced in this region and ukemi is also practiced at a very high level.

One thing that I have noticed in my visits to this region is that information from Japan about Aikido is not quite as accurate as it should be. Most information about Aikido, especially from Japan is first translated from Japanese to English or French and then translated again into Arabic: resulting in a bit of factual coherency being lost in the translations. When I have listened to student and instructor discussions about Aikido or history in Japan, there have been at times gaps or in congruencies in the information they have accepted as fact. I have heard many discussions about Aikido that melded fiction with non-fiction, true biographical information with author embellished representation, especially about Japanese samurai and martial arts.

Today in Japan, there are many Aikidoka from this region that speak very good Japanese. I would encourage these students to work on creating more direct translations of available materials on Japanese history, samurai and the martial arts in Japan. 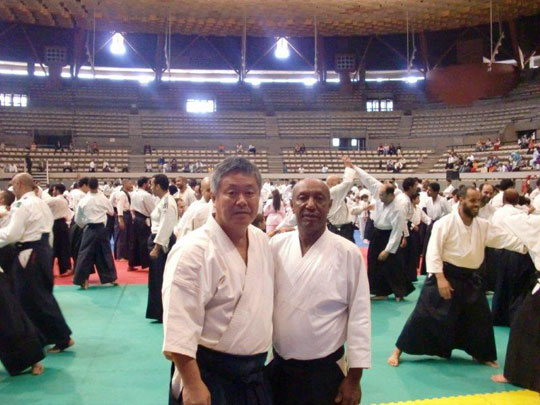 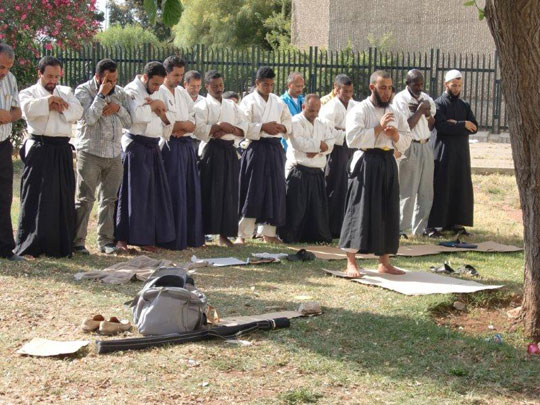 Prayer is a most important priority.

In attendance at this seminar were Turkey AHAN Coordinator and Aikikai nidan, Megumi Machi, and Nippon Kan graduate uchideshi from Izmir, Turkey, Cihan Karaogluol. Megumi stayed at Alaoui Sensei’s home during the seminar and Cihan served as my attendant. Also in attendance were Turkey Aikikai’s Ali Uludag Sensei and his students. 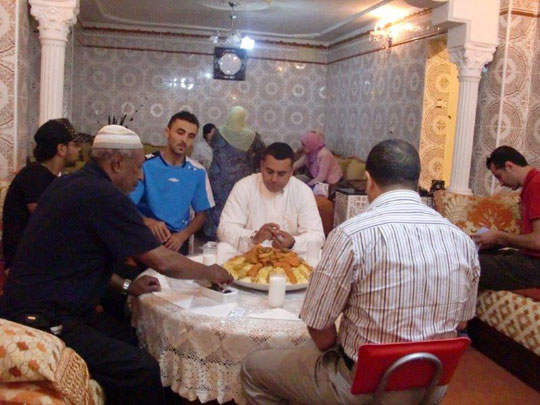 The hospitality of our Moroccan hosts was spectacular, affording our entourage with kind attention and provided lavish Moroccan feasts. Unfortunately on the morning of the second day of the seminar I awoke with a high fever. While I was able to continue teaching the morning and afternoon classes, I was disappointed that I was too ill to attend the well planned events scheduled for the evening.

Luckily with good care through the night I recovered quickly and was up and around by the following day. I heard that there had been much discussion at the previous evening’s gatherings about Aikido politics. I actually do not like to be involved in political discussions about Aikido, so maybe it was a blessing that I was unable to attend.

It was a bit overwhelming for me to teach 1000 Aikidoka at one time. It was a humbling experience and a good opportunity for learning. I sincerely thank all of the people of Morocco, especially Alaoui M’Barek Sensei for allowing me this opportunity. 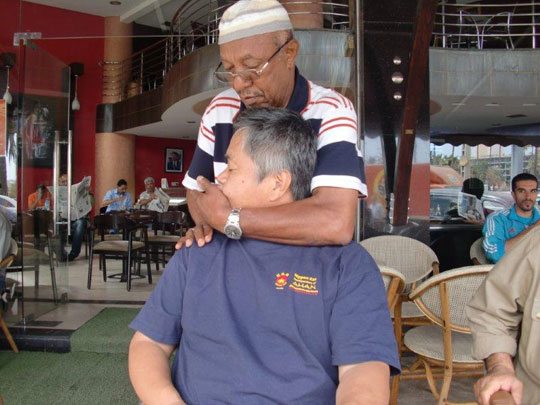 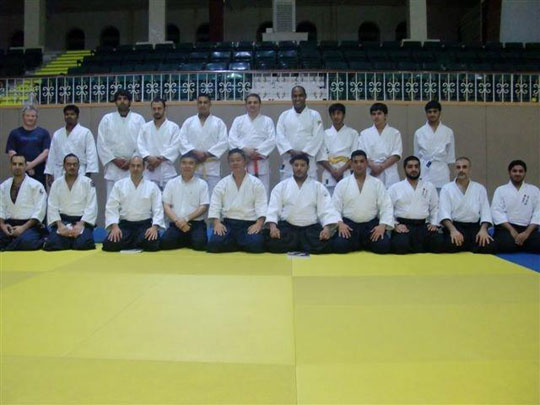 Before attending the seminar in Morocco, I made a quick stop in Abu Dhabi, UAE. While in Abu Dhabi I was able to practice with UAE Judo Wrestling Federation-Abu Dhabi Aikido and Jihad Francis Sensei. Aikidoka from Dubai also traveled to Abu Dhabi for an enjoyable practice together.

I was surprised however to see that one of the students who had practiced with Abu Dhabi Aikido last fall, had apparently struck out on his own. Apparently he had been awarded the rank of Aikikai shodan by a South East Asian instructor, and while I was teaching practice, he appeared in the corner of the sports center and began teaching a class of his own! Since Abu Dhabi Aikido is not an official member of Aikikai, I am still a little confused as to how he obtained the rank of Aikikai shodan in the first place.

The more I travel in the world, the more I meet new self-proclaimed “instructors” with questionable certification. Anyone can teach Aikido, especially since there seems to be an increasing ability for anyone to “buy” a certificate. I have seen this growing phenomenon with my own eyes, and it is a concern for me. Personality, experience and technical proficiency do not seem to be qualities that qualify one for promotion and certification these days and I see this as a growing problem. In my opinion, instructors that “buy” their certification need to have their “license to teach” revoked! 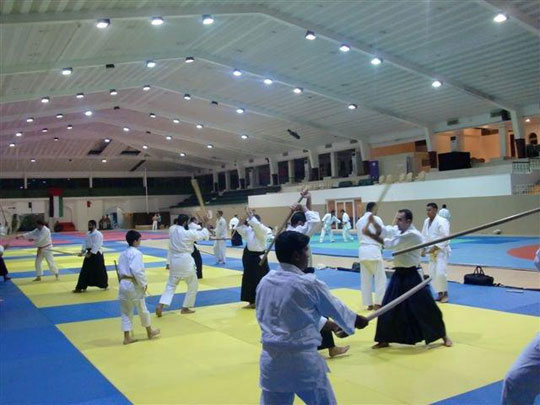 On this visit to Abu Dhabi, I was able to visit with Consul Haruo Yamagami from the Japanese Consulate in the UAE. Consul Yamagami graciously opened his home where I stayed, and even missed a day of work to escort me around the city of Abu Dhabi.
Thank you very much for your gracious hospitality. 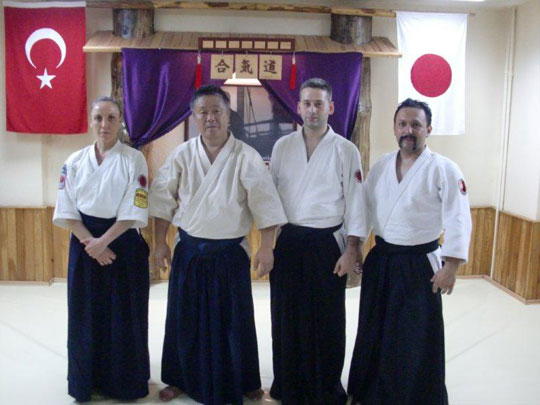 Torii Dojo http://www.herkesicinaikido.com/ is located in downtown Ankara, the capital city of Turkey. It had been a while since I have been to Torii dojo in Ankara and it was good to see Banu Sensei, a unique woman instructor in Turkey. Banu has been to Nippon Kan General Headquarters Hombu dojo in Denver twice in the last few years, but it was good to see her in her own dojo environment.

Teaching with a woman’s touch, Banu also coordinates classes and dojo projects with partners Baris Sensei who works as a planner and Ersin Sensei, an Ankara banker. The combination of all the unique talents of these three instructors has resulted in Torii dojo growing in size and stability. Today Torii dojo has a student base of over 120 students. 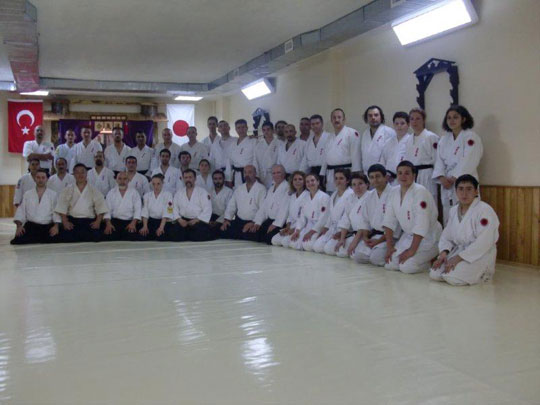 Practice was divided into two classes; one general class for all students and one class foryudansha.

I was impressed with the Torii dojo students; especially their buki waza was very strong. It was very apparent that Torii dojo practices bokken and jo technique regularly; their students know it well!

After the seminar in Ankara, I drove back to Istanbul with Nippon Kan graduate uchideshi Cihan from Izmir. The scenery was beautiful, and much more enjoyable than what you can see from a plane! 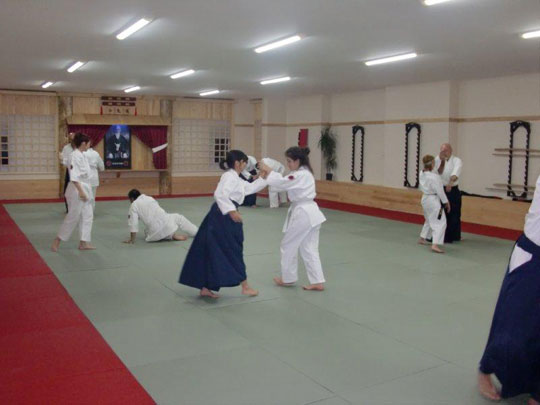 In Istanbul, we held practice in Ali Uludag Sensei’s new dojo. Many thanks to AHAN Turkey Coordinator Megumi Machi and her husband Behiji for all of their preparations and work behind the scenes.