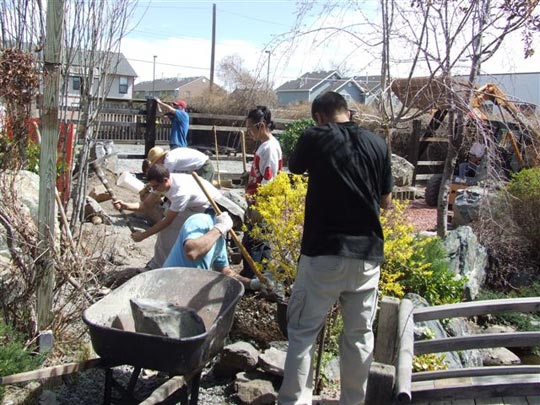 The current Nippon Kan gardens were designed and the initial foundation put in place over eleven years ago by Homma Kancho in fourteen hours. The heavy earth-moving equipment that had been rented that day was quite expensive and eyes were on the clock knowing that we could not keep the earthmovers one minute more than needed.

The time constraints lent themselves to a more impromptu rather than carefully laid garden design. It turned out to be quite an inspired work complete with two ponds, pathways, bridges and waterfalls. The late Morihiro Saito Shihan participated in part of the planning after the initial equipment had been returned by lending his skillful eye. He spent an entire day directing uchideshi students to move boulders just “so” to face the proper directions at the proper angles.

Less than five years later, Zagats National Restaurant Review named the Nippon Kan gardens in Domo Restaurants award for #1 Restaurant in Décor in the United States out of over 8000 Japanese Restaurants. The gardens have been a focal point for Domo Restaurant and have attracted patrons over the years from all over the world.

In April, Homma Kancho and student volunteers expanded the Nippon Kan gardens to include a meditation and massage area and a permanent home for the Mongolian ger (traditional yurt-like nomadic dwelling).