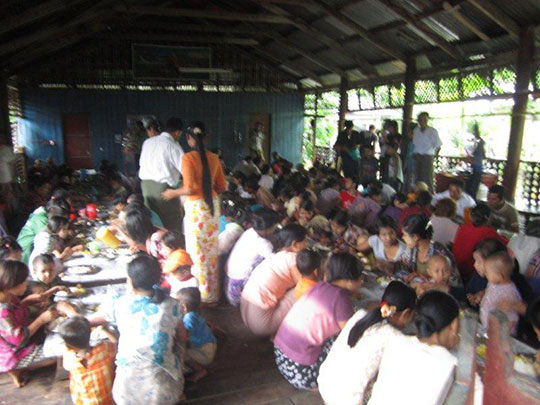 The Rakhine Province is located in western Myanmar near the Bangladesh border. This area has been plagued with tribal wars for a very long time, and skirmishes had begun again near the town of Sittwe in June. Some refugees of these tribal wars, especially children had received shelter at the Buddhist Temples in Sittwe and the purpose of m visit was to complete research on starting a new AHAN project at one of these Sittwe Buddhist Temples.

I first heard of the situation in Sittwe from Rakhine tribe members in Denver. I have previously visited the city of Chittagong in Bangladesh just on the other side of the border with Myanmar and had seen refugees of these wars from the Bangladesh side. After talking with Rakhine tribe members in Denver, I made it my mission to visit the area to see what could be done by AHAN. 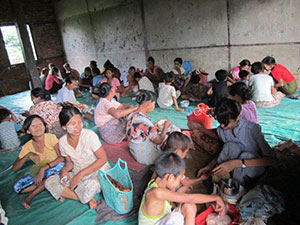 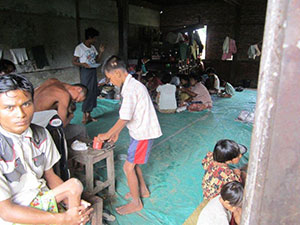 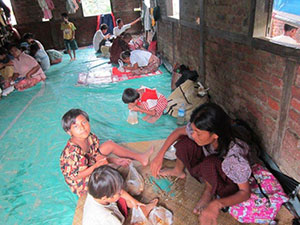 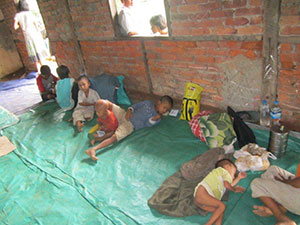 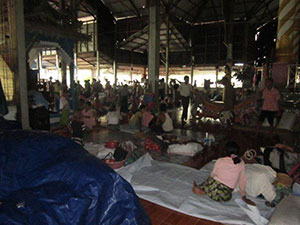 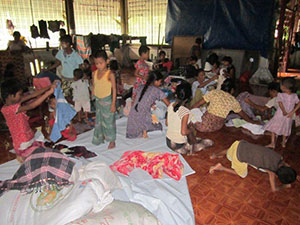 Most victims are women and children

Photos by Than Than

It was rainy season in Myanmar and it was raining buckets. To reach the temple, we all had to remove our shoes; it simply was too muddy to wear shoes and be able to walk outside. At the temple, we delivered money that had been collected and donated by the Rakhine tribe in Denver and rice from AHAN. Meals arranged by the Denver Rakhine people were also provided for over 150 people; refugees and monks alike.

I could see that the refugees longed to escape the suffering from the tribal wars and their desperate circumstances, and I worried the most about the children.

After the meals were served, we visited another temple that currently takes care of 10 orphaned children; a temple that once took care of closer to 100 children. We found out that the head monk had been arrested by the military regime and sentenced to 8.5 years in jail for crimes not founded. He was released after 18 months with the help of “Amnesty International” but in his absence the temple had suffered greatly and there was much in need of repair. 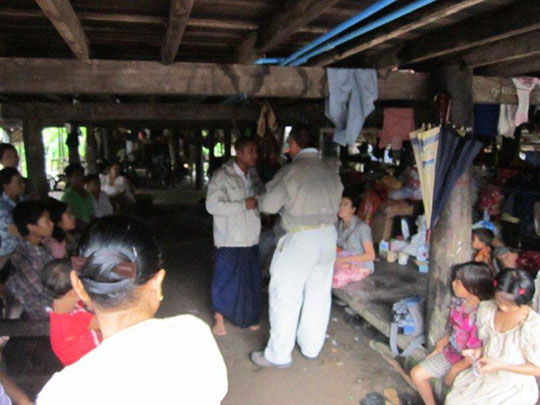 It is AHAN policy not to become involve in religious or government politics in any country. We must however verify what appropriate support in each situation is. AHAN never engages in illegal, inappropriate or dangerous actions nor becomes involved in personal or political confrontation.

What is important is that AHAN support meets certain goals and has the potential to help others become self-sufficient and develop on their own. In my experience, the first need is food. Once hunger and other basic needs have been addressed, the next focus of AHAN support is on education; education that includes not only reading, writing and arithmetic but also includes health, personal hygiene, manners and public health. Providing food is a support that can be accomplished fairly quickly. Education however takes time and discipline yet is the most important support AHAN can provide for the future of these children. 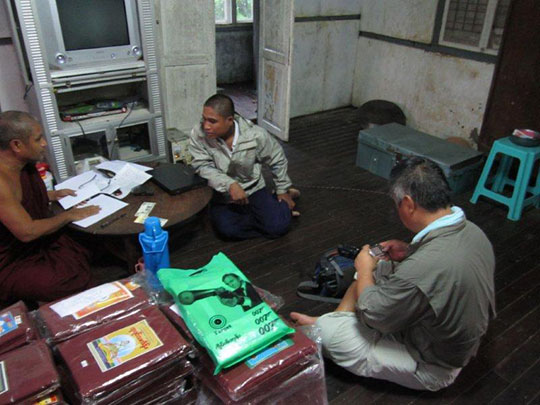 Homma Kancho meeting with monks to organize support for the temple

There are many things to consider when starting an AHAN project of support.

It is a tenant of both Buddhist and Muslim faiths that in its most strict interpretation mandates that keepers of temples and mosques must depend solely on donations for survival and must not engage in self generated commerce for their own existence. AHAN must determine that caring for refugees by any organization that it supports is not done just as an avenue to encourage more donations.

It is AHAN’s goal to encourage internal development and there is always a great concern about dependency. In my experience, groups that are supported by large organizations like the United Nations or other government run organizations, especially for long periods of time,  have a tendency to become “socially addicted” to charity and lose the ability to become self-sufficient.

With the goal of AHAN support being self sufficiency, like that being developed at the Bilay House Project in Thailand for example, I encouraged the monks in Sittwe to focus on harnessing any support from AHAN into programs that help them to be able to support themselves.

This will be a challenging task in Sittwe where the situation remains unstable. While I was there, there was a daily curfew in place with a lockdown from 6 pm. to 6 am. Any offenders caught on the streets during those hours were taken to prison for up to 6 months without a trial or court judgment.

For this project, the Rakhine staff at Nippon Kan in Denver have been and will be a vital support. 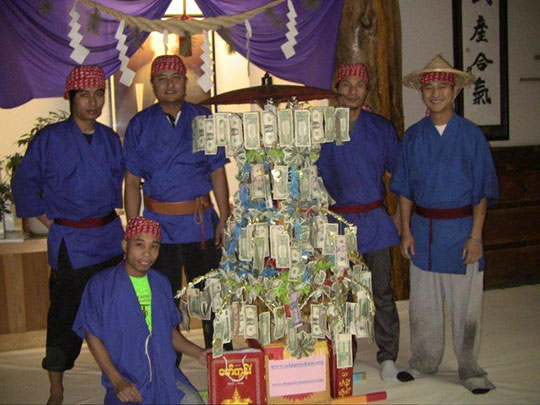 Watch the video on the village of Sittwe, July 2012