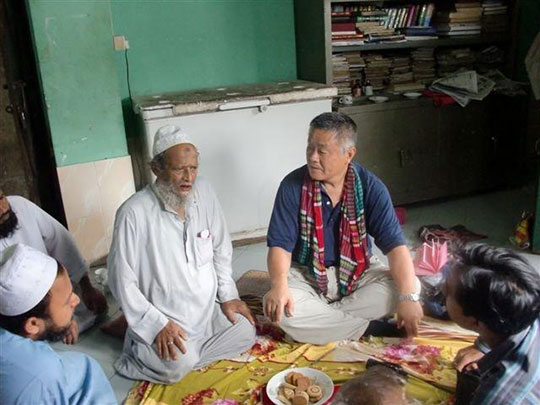 On March 3rd, AHAN Bangladesh Coordinator Maji Ai Sarkar reported that Elder Md Abdur Rahman, Founder of the Madrasa Orphanage for girls, had passed away on March 1st, 2012. Elder Md Abdur Rahman devoted his live to the protection of orphaned girls in Bangladesh providing food, shelter and education that otherwise the girls would never have known.

I made my first visit to the Madrasa Orphanage in 2007. The orphanage was founded in 1988 and suffered from a devastating fire in 2002. After the fire, all that was left of the orphanage was a frame work of bamboo poles covered with blue tarps. Unbelievably about 350 girls remained at the orphanage even in those conditions.

The first day we met, Elder Rahman prepared a meal for me; a very simple meal that turned into a very valuable experience. He opened up to me, sharing the story of the orphanage and the trials they had suffered. I decided then to help as best I could, and in the five years since that time have helped to build a new permanent facility for the orphanage and supply 500 kgs of rice to the orphanage every month.

I saw Elder Rahman last in July 2011 and found him ailing at that time. He did join us in front of the completed orphanage for a rare and valuable photo with the children. I gave him a donation to seek medical treatment. He thanked me sincerely and told me with tears in his eyes, “I will use this money for the boy’s orphanage we want to build next”.

Currently the boy’s orphanage is under construction in Dhaka, Bangladesh adjacent to the orphanage for girls and is slated for upcoming AHAN project support later this year.