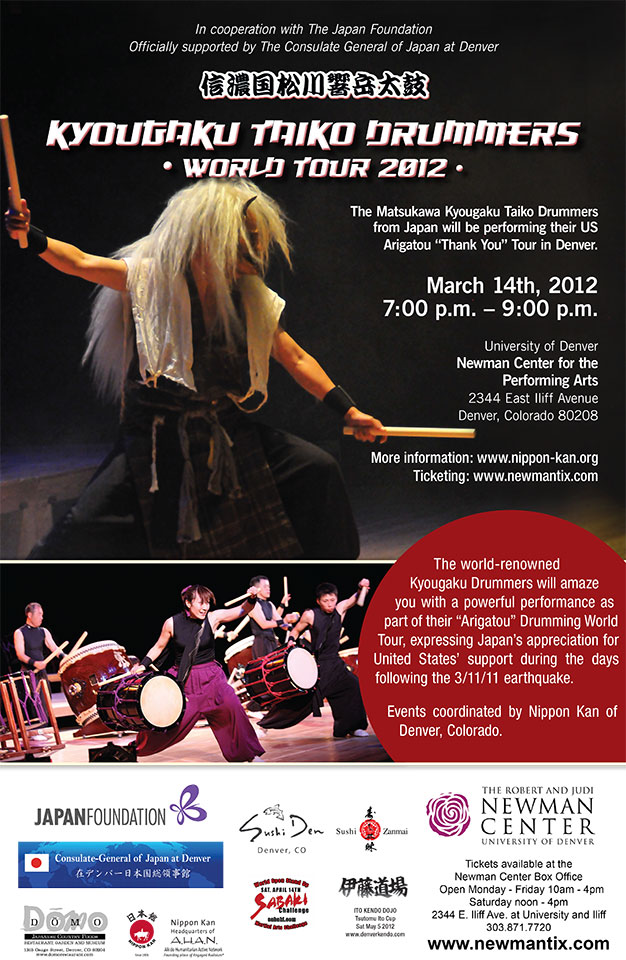 See the Drummers in Action!

From March 10th-16th, 2012, The Shinano no Kuni Matsukawa Kyougaku Taiko Drummers traveled from Japan to the United States to perform a series of “Arigatou” Thank You Concerts in appreciation of US Military and civilian support after the great Tohoku Earthquake and Tsunami disaster in Japan on March 11th, 2011.

This US concert tour was organized by AHAN Nippon Kan as a memorial to coincide with the one year anniversary of the earthquake and tsunami tragedy in Japan. All aspects of the tour were planned in meticulous detail by Homma Kancho, who has been working on the concept and execution of this grand event since the summer of 2011.

This “Arigatou” concert tour was created by AHAN Nippon Kan as an expression of the appreciation of the people of Japan for the support they received from all over the world during the aftermath of the earthquake disaster.

With a grant from an international communications foundation, AHAN Nippon Kan and Homma Kancho were the sole coordinators and organizers of this mega-event. All proceeds after expenses from the concert series were donated to the Denver Rescue Mission in Denver.

History of Kyougaku Taiko Concerts Around the World with AHAN