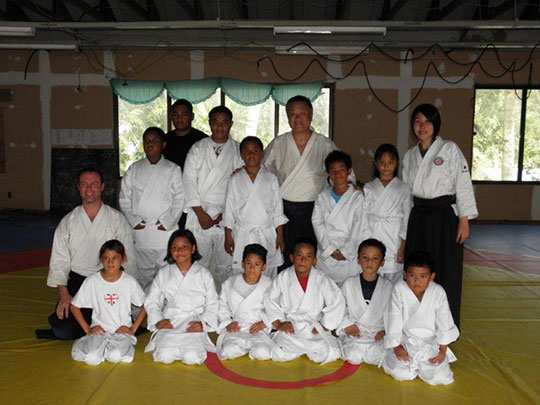 The Marshall Islands (RMI) have been described as a necklace of pearls surrounded by a sea of emerald green. To reach the Marshall Islands, one must travel six hours from Los Angeles to Hawaii, wait in transit for seven hours before boarding another five hour flight west to Majuro. It was a long journey from Denver where Nippon Kan Headquarters is located.

CMI College in the Marshall Islands is located in the middle the island, an island so small that the runway at Majuro airport is bordered on both sides by the Pacific Ocean!

We were welcomed at Majuro Airport by Ambassador Kashima; Representative Ambassador of Japan. 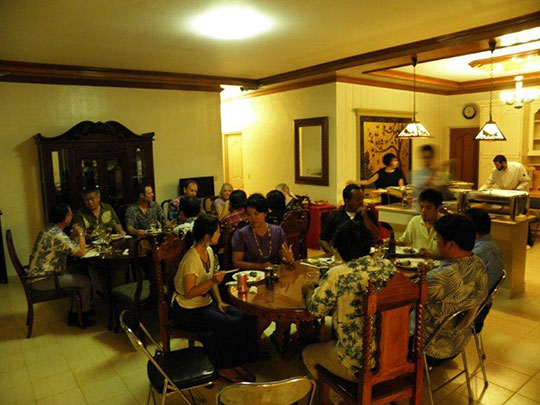 Reception at the home of Ambassador Kashima

At Ambassador Kashima’s invitation, the purpose of this visit to the Marshall Islands was to join local CMI College Aikido instructor Takako Moriyama in teaching Aikido to students on the island, and to perform Aikido demonstrations at a Japanese Cultural Festival, appropriately called MATSURI organized by Ambassador Kashima, JAICA volunteers and staff. Homma Kancho performed at this MATSURI festival, and other demonstrations around the island, one at the university, one for over 600 elementary school children and one for local police. 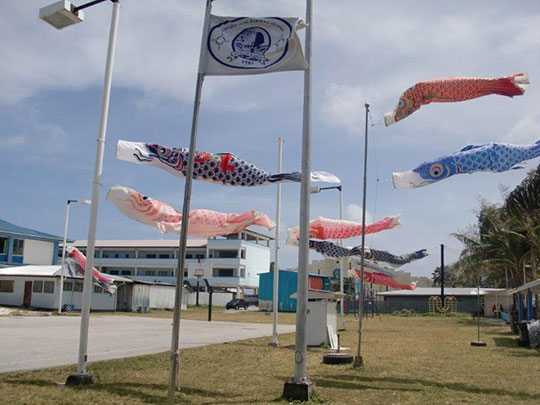 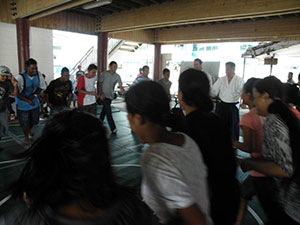 Homma Kancho teaching the principles of Aikido to students at CMI 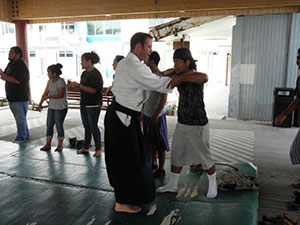 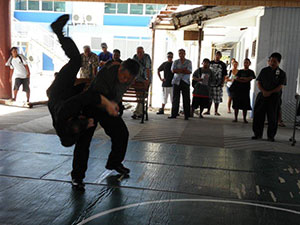 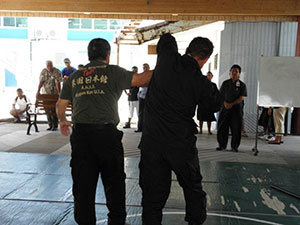 Special performance for RMI Director General Police Officers and others 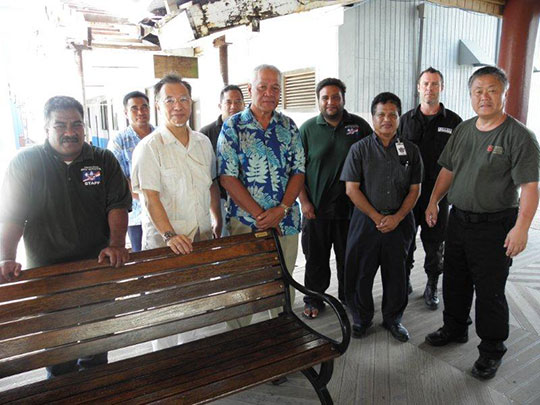 Early one morning, Homma Kancho spoke while we strolled through the town, walking slowly, matching the even, casual pace of the locals. “I came to this far away island after receiving just one email; this kind of action is part of the original foundation of Nippon Kan.

When I first moved to Denver in the U.S., I came with only one keiko gi in hand, and did not have any students surrounding me like I do now. At that time, Tomiki Aikido and other martial arts like Karate had established relationships with local Japanese establishment organizations and there was really no place for me to fit in. These groups sometimes even blocked my way and my efforts to establish and expand the practice of Aikido in Denver.

To advertise without much of a budget,  I performed so many demonstrations at small events and schools I was nicknamed the “barnstormer’. Today Nippon Kan is a large, established dojo and I rarely perform demonstrations outside of the dojo anymore. The foundation of Nippon Kan however was built on performing public demonstrations. Coming to the Marshall Islands to perform these public demonstrations is a good chance for me to test myself too. When Moriyama Sensei shared with me her enthusiasm for expanding the practice of Aikido in this community, I felt it was important to support these people in their efforts. It is difficult to be able to operate a dojo successfully if you are not able to perform on the front lines; therefore I am very thankful to have this opportunity again”.

I learned many things watching Homma Kancho as he taught and performed. He added jokes and unique creativity to his teaching methods with the children’s classes and included many lessons on the history of Aikido for the University level classes. Homma Kancho’s own knowledge of the history of Aikido from a first-hand perspective is invaluable. I have traveled to many countries, many times with Homma Kancho, but this was the first time I had experienced watching his skill in adapting his approach and sharig the wealth of his knowledge to such a varied audience. 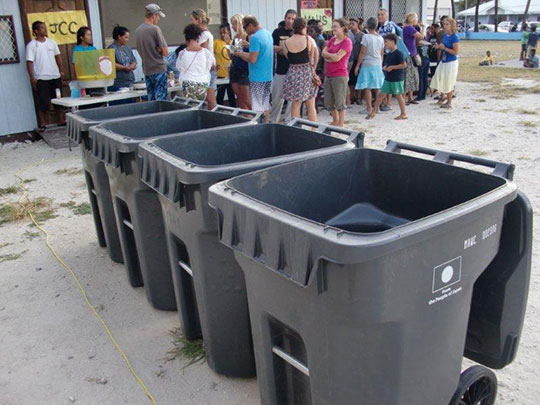 As our plane took off from the Marshall Islands to head home, Homma Kancho said, “The beautiful Marshall Islands we are leaving used to be called “Trash Island”. NGO groups organized by the Japanese government taught the local people how to recycle. Japanese NGO groups like JAICA have sent young Japanese teachers to teach Japanese and mathematics in the elementary schools. Many of these JAICA teachers stay on the island for terms up to two years. I worry that the special experience these Japanese teachers are gaining will not be fully appreciated or applied when they return to Japan. I do not want all of their hard work and efforts to become just good memories”.

During our stay in the Marshall Islands we were treated very kindly, especially by the lead organizer of the events at CMI, Mrs. Niko who invited us to her home for a traditional welcome party. The people of the Marshall Islands have developed a good relationship with Japan and the Japanese people who have come to this faraway place. 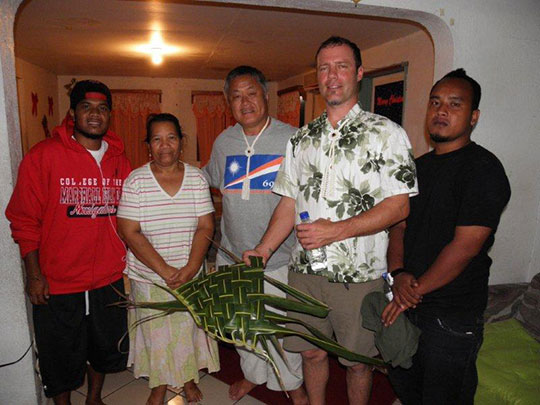 With Mrs. Niko and her family 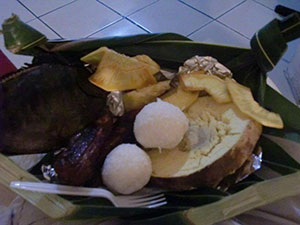 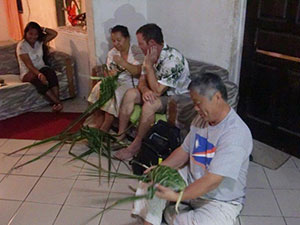 Learning how to weave baskets

Only two days before coming to the Marshall Islands, Homma Kancho was teaching a seminar in Italy. I cannot believe the energy he has for a man of 63 years. Homma Kancho smiled, “As long as I am asked, I will continue”.

Both in Italy and the Marshall Islands, Homma Kancho performed with his jo. These videos are on You Tube and have become big hits! Link here to see Homma Kancho in action!

Thank you very much to all of the people of the Marshall Islands for a wonderful visit. 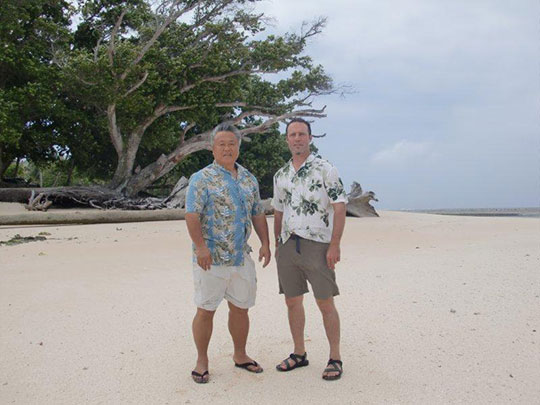 Homma Kancho and me