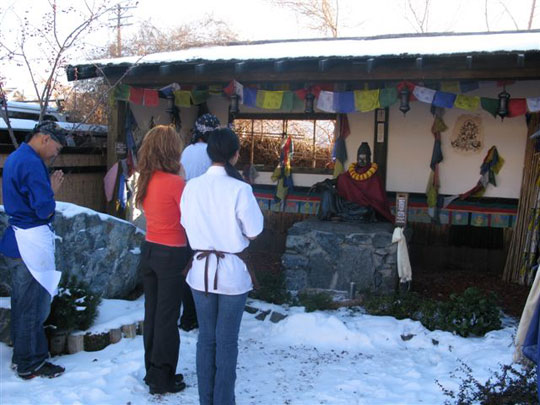 Nippon Kan AHAN supplies one ton of rice every month to two orphanages in Bangladesh. Since this project began in 2006, over 35 tons of rice have been donated by AHAN to help in an ever so small way to feed the children in the orphanages care. This past spring there was a drastic increase in the price of rice in Bangladesh due to rice shortages caused by adverse weather conditions, floods and a global change in the international grain markets.

Nippon Kan General Headquarters does not ever solicit outside donations for this project, but interestingly, a new benefactor seems to have appeared at Nippon Kan. The finishing touches on last year’s Nippon Kan garden expansion was completed on July 15th, 2007 with the placement of a bronze statue of the Kanzenonbosatsu (Musubi Kannon). This beautiful image from Homma Kancho’s private collection is a seated Kannon figure representing the Buddha listening to the heart of mankind. Homma Kancho wanted to place this statue in the Nippon Kan garden to bring a feeling of home for staff originally from Buddhist countries.

Since the statue has taken up residence in the Nippon Kan gardens, we discovered that coins were being tossed into the Buddha’s lap by customers at our Domo Restaurant and other visitors. We made a donation box to collect the coins and pledged all of the donations to the AHAN Bangladesh Rice project. Lately when checking the contents of the donation box, we have been surprised to find it filled with coins and bills, illuminating the kindness of our Domo customers who understand our endeavors with AHAN. We appreciate their support and the support of the still figure in our garden that seems to have brought to us a little extra help for the orphans of Bangladesh.