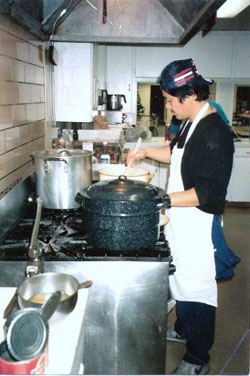 Cooking at Denver Rescue Mission in the early days. (about 1994)

This year, Nippon Kan will celebrate 20 years of service and 60,000 meals served at the Denver Rescue Mission. This is a very unique accomplishment for a martial arts dojo; I don’t believe that has been done anywhere before.

Every 3rd Sunday of the month, Homma Kancho and a staff of student volunteers work from 7:00 am to 9:00 pm to serve 4 dinners serving a total of an average 350 guests and residents at the Denver Rescue Mission. Students who attend Sunday morning practice at the Nippon Kan dojo stay after class to help peel and chop the vegetables used for the evening meals. After the morning prep, Homma Kancho works for the rest of the day to prepare a menu of 5 to 6 entrée selections. In a pot large enough for a small child to paddle around in, Homma Kancho makes a pot of chicken curry for 350! The biggest challenge, Homma Kancho jokes is to just stir such a big pot! Lot of kia helps!

This May, Homma Kancho celebrates his 60th birthday so it is possible we might start to hear a few complaints from Homma Kancho while puts his whole body into stirring the pot. “I used to not have any trouble stirring this pot… this could be a problem”, notes Homma Kancho. 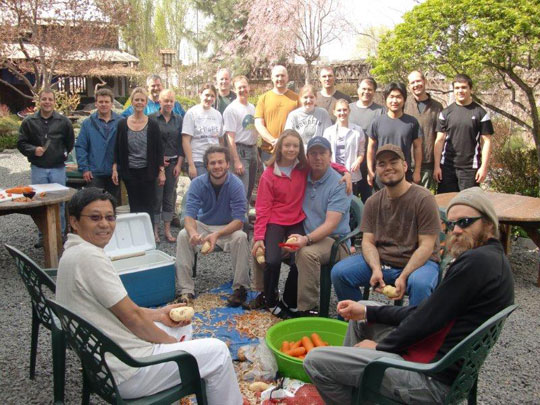 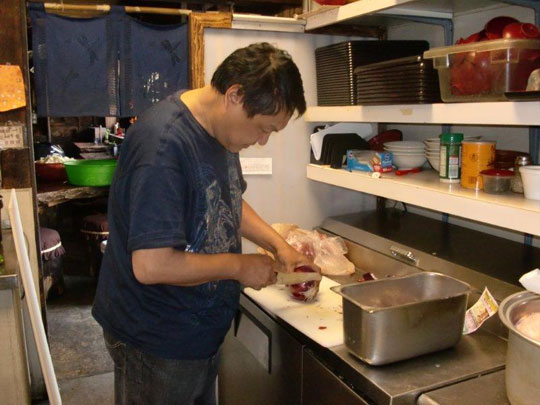 For many years, we served two dinner services at the Denver Rescue Mission; one for residents and one for outside guests. Recently the services have been increased to four which makes for doubled efforts for Homma Kancho and his crew of volunteers…

The funds used to support this project have come from Homma Kancho and Domo Restaurant. This is not the only project that Homma Kancho has personally funded; he supports most of the AHAN projects personally all over the world. When asked about this, Homma Kancho replied, “I don’t drive a car and I don’t play golf. I have no children to support and I reside at the dojo. Not being burdened by all of these expenses allows me the opportunity to do this”. Once asked by an assistant when visiting a Bangladesh orphanage, where the money would come if he decided to support that orphanage, he replied, “If I skip going out to dinner at the sushi bar just one time, I can feed about 30 people with rice for a week! When I first came to the United States I only had $5000.00 to my name. Today almost forty years later, any money I earn over $5000.00 is extra and I can use for AHAN projects”.

This May, all students at Nippon Kan Headquarters and around the world will celebrate Homma Kancho’s 60th birthday.

Editor note: Out of respect for privacy, photos are not allowed to be taken of guests during mealtimes at the Denver Rescue Mission.