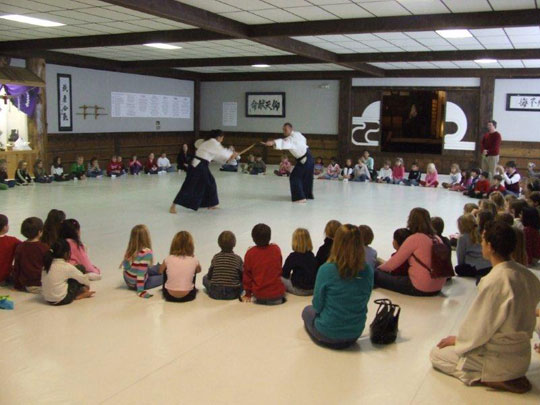 The school fieldtrip program has been part of the Nippon Kan curriculum for over 35 years and started as a way to introduce Japanese culture to the Denver community.

In the earliest days, Nippon Kan was called Japan House Culture Center and offered classes in Japanese language, shodo (brush calligraphy) kado (flower arranging), Japanese cooking classes and of course Aikido. Japanese language was a popular subject of study at that time and Japan House instructed up to 6 classes a day! At that time, Japanese cultural and Aikido demonstrations were performed in the Denver schools and were in such demand that sometimes two schools were scheduled in one day to keep up with the demand.

Nippon Kan’s current Japan Branch Coordinator, Yutaka Kikuchi was a central figure in Japan House operations in those days and worked with the Japanese volunteer staff in Denver full time to keep up with the teaching of classes and demonstrations schedules.

Since Aikido was relatively unknown in Denver at the time, the cultural demonstrations served as a useful vehicle for introducing Aikido to Denver. Ultimately this approach proved successful, and Japan House became Nippon Kan and AHAN around the world.

After Nippon Kan moved to its permanent facility in 1996, cultural demonstrations have been held on the premises. School buses from all over the metro Denver area travel to our new facility to tour the Japanese folk art museum and gardens, watch Aikido demonstrations, participate in origami and calligraphy projects in the dojo, visit and learn about AHAN and enjoy a Japanese lunch at our adjoining Domo restaurant.

These tours cost participants $10.00 per person, $7.00 of which are used to support AHAN rice donation projects and other projects locally in Denver and abroad. For 2010 we have about 12 school fieldtrips reserved and are expecting about 1000 students through the month of May.