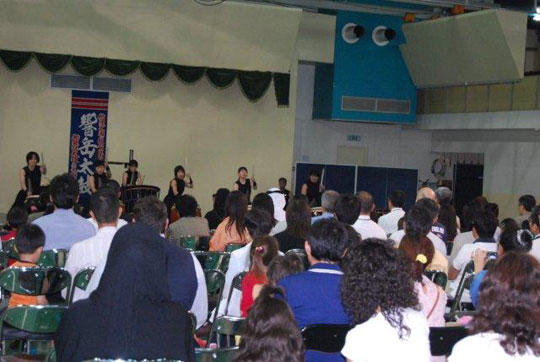 Playing at the Japanese school.

At 6:30 pm. that same evening, about 200 people gathered at the Japanese school gymnasium for a concert for the 40 Japanese students who attend the school plus staff, family members and friends. This Japanese school is well known for its high standard of scholastic and intramural studies and the teachers worked busily to turn the well equipped gymnasium into a concert hall complete with stage, audience seating and PA system. Being so far from their homeland of Japan, I could feel the sincere enthusiasm in the teachers as they dedicated their efforts to the tasks at hand.

The concert was attended by Japanese Ambassador Tatsuro Watanabe and his wife and Setso Ohmori, the DCM Minister at the Embassy of Japan. The PA system for the concert was arranged by First Secretary and Consul Haruo Yamagami, also of the Japanese Embassy.

At the end of the concert, all of the students, parents, teachers and staff lined the driveway and waved a small sea of Japanese flags in farewell. It was a touching and thoughtful sight that was appreciated by all of the Japanese drummers in this land so far away from home. 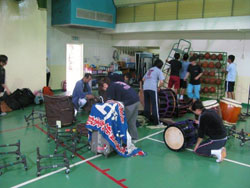 Many people help behind the scenes. 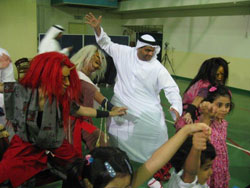 A local father joins the drummers for monster play 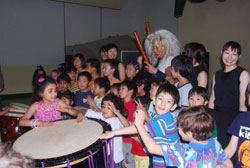 The kids delight in the performance. 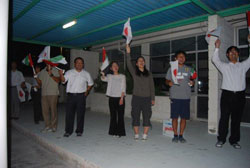 A grande send off with Japanese flags.