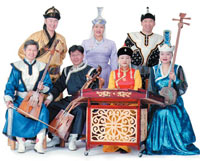 The previous day had been warm with a hint of early spring in the air. We woke on Thursday morning to a flurry of snow.

It was show time. Although we had dreamed about it since our last visit to Mongolia in July of 2001, the concert had come about quickly, planned and executed in only two months time. Nippon Kan has hosted many seminars and activities for dojo members, families and friends, but this was the first time that we had hosted an event advertised and marketed to the general public.

From the start, planning this fundraising concert was a challenge. First we needed to find the right location. We were lucky. We aimed our sights high and actually secured the Grand Seawell Ballroom at the Denver Center for Performing Arts. Very prestigious indeed, the usually booking notice at the DCPA is eight to ten months…, we secured a date with seven weeks left to plan. The commitment was now made.

The second challenge we soon discovered was that most Americans are not completely sure where Mongolia is much less what Mongolian Folk singing sounds like. Homma Sensei, who served as concert program director, had faith however, commenting that “People in America might not know much about Mongolian music, but there are many Americans who appreciate art and culture and can appreciate quality in a performance even if the medium is new to them”. So we foraged ahead, working hard at the task before us—to introduce Denver to the mystery and wonder of Mongolian song.
The planning continued with daily meetings and tasks to promote the event. The first task was to develop posters and flyers to help us get the word out. We arranged to have professional photographs taken by John Mueller, a local well-known photographer. Together with artwork designed by Daniell, posters were produced for distribution.

Armed with enthusiasm and perseverance, our public relations coordinator Carolyn Kelly tackled the media, and managed to get a number of write-ups in the local papers and a live spot on the local morning television news. Other Nippon Kan members pitched in. Organized by Suzanne Collins, a Nippon Kan staff member, the group performed at an instore demonstration at Tower records. Other members such as Nathan Sanzone McDowell spent Saturdays traveling by bus and bicycle to put up posters and flyers in and around the Denver and Boulder area. Domo Restaurant sponsored a preview concert for the local media, which helped tremendously in promoting the concert to the press.

Homma Sensei began working on the concert program, listening to the groups CD’s from morning till night. It wasn’t long until all of us could hum along to the litany of songs. Homma Sensei designed and coordinated an hour and a half program, which was an inspiration in its presentation.

12:00 PM.
By lunchtime a four-man cameral crew from the Art Institute of Colorado had begun to set up. The crew under the supervision of Mr. Bob Studinger, and lead by John Jensen set their cameras strategically to capture the event on film. The concert hall was arranged to hold 516 chairs and the DCPA staff began their lighting and sound checks based on the program script designed by Homma Sensei.

2:00 PM.
We began the one and only rehearsal we would have before the performance began in less than five hours. The opening numbers of the show, which included an American tribute, were the most critical. These were rehearsed diligently to get just the right nuance and tempo. The technical staff worked to time the slide show, which was projected behind the performers to add visual imagery to the sounds of the performers. By 5:00 pm., Nippon Kan volunteer staff members had arrived to take up their positions as ticket takers, ushers, and hosts.

We crossed our fingers and opened the doors at 6:30 pm. for a pre concert art exhibition and Mongolian wrestling demonstration. The concert hall had been set up with a multitude of colorful canvases created by the well-known Mongolian artist Tsugo.

Even as the doors opened, there were people waiting outside to come in.
Five minutes before curtain time we were amazed to find that all 516 seats had been filled, and hurriedly arranged for thirty more chairs to be brought in.

The lights go to black and the crowd settles in. A spotlight trained on the rear entrance to the hall illuminates a Mongolian woman in traditional dress and a gathering of children, which she scurries before her onto the stage. On the stage, in the stillness, under the one spotlight, she leans toward the children and begins to tell a Mongolian tale in her native tongue. The melodic sounds of the spoken Mongolian language fill the hall. Projected behind the stage is an English version of the poem she tells which the audience can follow to understand the meaning of her words. The stage fades again to black. After seconds of silence a single warbled note from a mouth harp can be heard, followed slowly by another, and another. An image is projected behind the stage honoring the victims and heroes of September 11, 2001.

Slowly in the darkness, two cello like instruments called a Morin Khuur and a hitting dulcimer begin to play America the Beautiful. The lights brighten as the melody increases in intensity and volume. The concert has begun, and strong emotion can be felt in the hall as thunderous applause breaks out.

The performance was divided into three sections. Over twenty songs were performed punctuated by commentary delivered by the Mistress of Ceremonies, Carolyn Kelly who in her own right is an experienced opera singer and performer. The encore was a popular Mongolian favorite and the Mongolian natives in the audience rose to their feet and sang along. Tears could be seen in their eyes as they stood singing and swaying with the music.

Right on time, the concert finished to a five minute standing ovation. After the performance, the group members mingled happily with the audience signing autographs and CD’s. It was a joyous moment indeed.

The first purpose of this concert was to raise funds to benefit the orphaned children in Mongolia, but it was not the only purpose. It was also a vehicle to promote cross-cultural exchange for all of us here in Denver. Everyone who worked on this project whether from Mongolia or America or Japan came away from the experience with an enriched understanding of one another. It was also an important vehicle for the Denver Mongolian Community. It was a way to share their native culture and their national identity with their new neighbors and friends here in Denver.

Nippon Kan widened the circle by inviting Denver based groups who were also involved in community service to attend the concert as our guests. Among these were guests from the Denver Rescue Mission, the Denver Parks and Recreation Department Volunteer Office, the Dianna Price Cancer Foundation, and the Art Institute of Colorado.

Many sincere thanks to Nippon Kan students who volunteered many hours of their time, and to our corporate sponsors; Nishimoto Trading Company, Mission Travel Services, Joko Ninomiya Shihan—Enshin Karate, Sadaharu Kurobane
Sensei—DenwaKan Karate and Yutaka Yaguchi Sensei—Japan Karate Do.