Armed with 24-7 patches on their uniforms, the Nippon Kan uchideshi engage in a level of practice that is not easy. All in all, the current uchideshi are young, in good spirits and seem to enjoy their practice. With only a half day on Sundays to call their own, they have little time to rest, and this past Sunday, even their afternoon off was spent working in the Nippon Kan gardens with Homma Kancho.

Homma Kancho always rewards the extra efforts of the Nippon Kan uchideshi and after a Sunday garden project always takes them out for a big dinner. Homma Kancho learned this tradition from the late Morihiro Saito Shihan who taught him, “If uchideshi help you with a special personal project, (the Nippon Kan gardens are Homma Kancho’s responsibility and he strictly oversees all of the garden care) you must feed and take care of them well.” More uchideshi are scheduled to arrive at Nippon Kan for the summer. 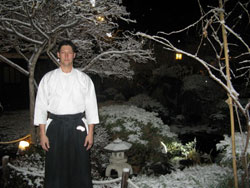 From Bismarck, North Dakota, Jason owns his own house painting business. During his business slow season earlier this year, Jason took some time off for his own personal training at Nippon Kan.

From Chicago, Illinois, Rose was first a regular Nippon Kan member before becoming a new uchideshi after graduating from nursing school. After completing her uchideshi 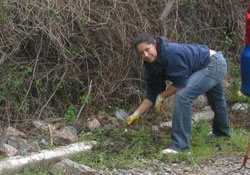 term, Rose will continue on towards her career as a registered nurse

This Spring, Nippon Kan had two more uchideshi Canada and Australia. One was asked to leave after one week, one left after one month.

Reflections of My Practice at Nippon Kan

That was August 2006..,myself and the aikido group I practiced with at that time we went for seminar in Donegal, Ireland. That was where I met Gaku Homma Shihan for the first time.

I was quite new to aikido, just had it started a few months before. Despite of that I didn’t now much about the martial art when I started it I had a very strong feeling like it is something which is right for me, something I want to do, it was just something that had `common sense`. I liked the flow of it. That was  all I could say at that time…

When we went for the seminar in Donegal, I remember that there was something different about the way Gaku Homma Shihan  was teaching, I liked the way I experienced aikido that time.. That was also the first time when I heard of Uchideshi program.

Over 1 year had passed since that seminar when on 13 of September 2007 I arrived in Denver, Co with an intention to participate in Nippon-Kan Uchideshi program.
My intended stay was for 3 months. What I think I expected from the program was to improve my Aikido skills in a short period of time. What I had experienced was far beyond my expectations. What I mean by that know only people who were leading me through the program, all those who were around, and all who had decided to become  Nippon-Kan Uchideshi.

On purpose, all I would like to reveal about my first 3 months there is that there were many great days pretty well balanced with the days when I was asking myself a question `what am I doing here` looking at my bags with strong thoughts of running away..

Eventually that was a great experience which I only benefited from, in many ways. I graduated my first 3 months on 14th of December 2007. Then I went for a short break and came back to Dojo for another term.

At the beginning of March 2008, Sensei gave me the great opportunity to assist Nepal Aikido Club(currently Nepal Aikido Association) in their practice. 5 months in Kathmandu were one of the greatest experiences and moments in my life so far. When I was about to finish the project in Nepal, I was so excited  when Nippon –Kan gave me another opportunity to continue A.H.A.N project, this time in Philippines, where I was assisting instructor Ava Yancha, my current friend. Another great experience, in many ways, Despite of the situation in Mindanao Islands, I really enjoyed my stay there and I will always be grateful for all the wonderful moments to all those good hearted people I met there. Unfortunately I could stay with them for only 8 weeks. I came back to Denver at the end of September. Sensei had covered all the expenses of my great journey for 7 months which I am deeply grateful for.
I stayed in Denver in home Dojo for another month, and then decided to go back to Europe to work. A few weeks ago I had a great surprise. Sensei took me back to Nepal for a week. It is March 2009 now. Currently I try to work on my career, and thinking of A.H.A.N as a big part of my current and future life.

It has been 1.5 year since I crossed Nippon-Ken’s door for the first time. How I see, understand and believe what Aikido is for me now?  It is an `Art of living`.Aikido expands far beyond the mats. It is an art through which people join together, cooperate, help and support each other. An art through which people learn how to flow and act together. It is being said that the age of consciousness has come. Age when people start understanding that we are all one and that we are here to grow and progress together. People start awakening from the dream of  ignorance, hatred and selfishness which separate us from the whole. They start understanding that all the differences between us: cultures, religions, languages people had created by themselves, and all that now  is a result of our programming which we have been receiving since we are born.

People start being aware of the universal harmony. They start understanding that going against another in any way, with thought, speech or physically is ultimately going against oneself. According to that Aikido as martial art , `the art of living`, perfectly suits the moment. I believe that the art of aikido is an art of living on the New Earth. It is a Queen of martial arts.

I would like to express my deep gratitude to Sensei, Emily sensei and all Nippon-Kan, everybody who is a part of it. Thank You.

AHAN Nippon Kan currently has active projects and activities ongoing word-wide. We receive activity reports from coordinators from many countries, and translating, editing and organizing these reports takes time. Not only are there a lot of reports to work through, there are always the challenges of rolling blackouts, other internet service interruptions or even civil skirmishes that delay reports. Sometimes it is decided by editing staff that certain reports need to be held until news of events in certain areas cool down a bit.

Homma Kancho’s activities and reports abroad can be challenging too. Sometimes for safety reasons, Homma Kanchos visits to other countries must be unannounced. Sometime the photos or reports from these visits are held for privacy or security reasons.

We thank you for your patience and understanding the time it takes to sort all of these missions and to report on them responsibly.