From Nippon Kan General Headquarters:
Homma Kancho returned to Turkey on a tour of four cities this past June and July. Packing little more than his keiko gi, Homma Kancho moved from town to town, country to country on what he calls his own personal “caravan” training. Homma Kancho always carries his keiko gi when he travels and even on the planes, his uniform is close by. Below are excerpts from Homma Kancho’s travel log during this trip to Turkey. 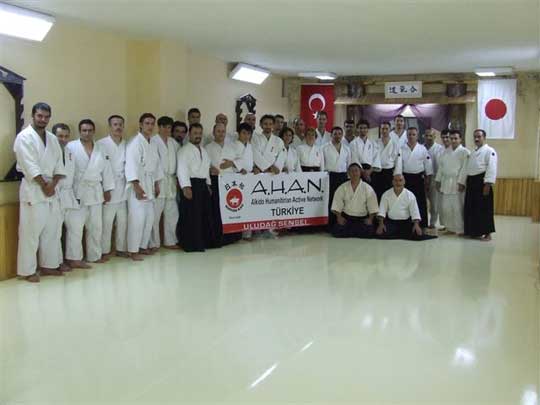 The plane from Budapest to Istanbul was five hours late. Actually four days ago when I took the 12-hour flight from Denver to Budapest, that plane was three hours late so I missed my connection in Frankfurt. All of us on that plane waited at the counter for four hours to get new connecting flights. I can understand about safety issues or weather etc. and I can be patient, but the Lufthansa customer service really was the worst. There were about 300 people in line and everyone was tired, especially the airline staff who seemed to have given up on trying to be cordial or accommodating to anyone but the Germans. In my travels, it is interesting to see how differently different countries operate their airlines. It seems like an indication of general attitudes and airline service varies greatly from place to place.

I gave up on my original flight from Budapest to Istanbul and switched to Turkish Air. I have always had good luck with this airline and have always found Turkish Air employees to be courteous and helpful. They usually say Konnichi wa (hello in Japanese) when they see my Japanese passport, and this time actually bumped me up to business class without an extra charge because the economy section was full.

Finally arrived in Istanbul and changed flights to the Capitol City of Ankara. AHAN Nippon Kan Ankara Coordinator Banu Alisverisci and her staff were there to greet me. This team did a great job organizing the Ankara events for the Japanese Kyougaku Taiko Drummers when we came last year.

Only a two-day stay in Ankara. Practice at Turkey Aikikai Ankara dojo was good! The number of students was up and the level of energy was high! Compared to last year, the student level for bokken and jo has greatly improved. Uludag Sensei came by night bus from Istanbul to join us. 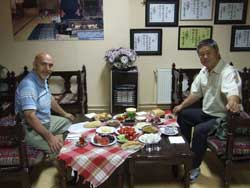 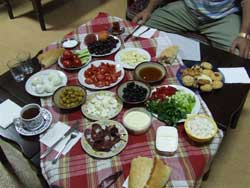 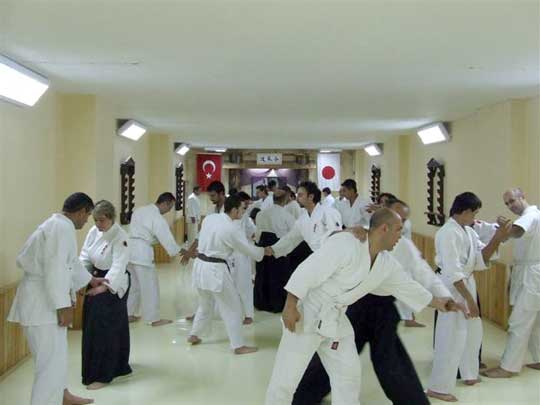 Ali Uludag Sensei of Turkey Aikikai www.aikidoturkey.com has been busy finishing up some very successful and rewarding projects. He hosted a Turkish Aikikai seminar in Instanbul at which his first teacher—Aikido pioneer to Turkey Kumagai Shihan—traveled to attend. About 400 students came to the seminar and it was a great success.

The last time I was with Uludag Sensei I gave him three pieces of advice. “1) don’t compete with other original Istanbul students of Kumagai Shihan. 2) Show your respect for Kumagai Shihan’s long-standing efforts in Turkey by bringing his original students together in a positive and friendly way. Do something together for him like holding a party in his honor. 3) Don’t forget to name a humanitarian or community service project as a beneficiary of some of the proceeds for the seminar.

Uludag Sensei listened to well to my advice and took every point to heart. This I think gave him the foundation for an outstanding success, and he seemed to be beaming from the experience. Some of the seminar process were donated to a support center for homeless, orphaned street kids. I was proud to see him initiate projects with AHAN philosophy on his own and very successfully at that! He and his students are on a very good path and are growing strong. This makes me happy.

Soon it was time for Uludag Sensei and me to leave Ankara, and this time I took Banu and three members of her staff with me by plane to Izmir and the Aegean Sea. This was my way to say “thank you” for all their efforts and hard work last year when the Japanese drummers came to Ankara. 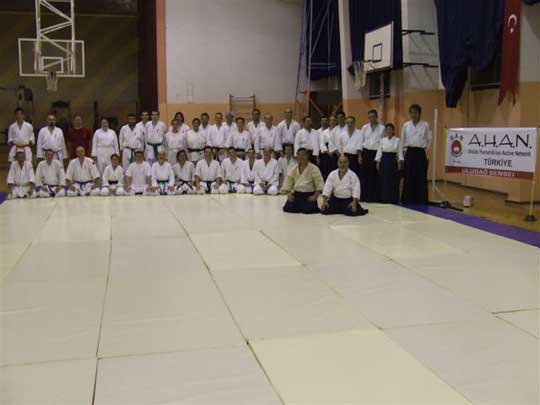 As soon as we stepped off the plane in Izmir, I was overwhelmed by the site of oleander in bloom. They were everywhere and quite beautiful, but I hear they are also quite poisonous. Instructor Tolga Akyel of Aikikai Izmir dojo picked us up. The Ankara crew came on a later flight. 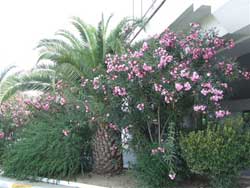 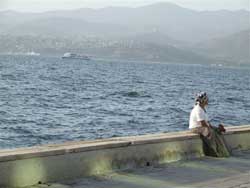 A cool breeze off the Aegean sea brought relief from the heat.

It was record-breaking 51 degrees centigrade in Izmir, a temperature that had not been seen in Izmir in 100 years. Luckily there was a cool breeze coming in from over the Aegean Sea which made it seem cooler than it actually was. It was still HOT outside which made me stick pretty close to my hotel room. My first priority is always to keep my body in good shape on these journeys, and I did not want to get ill from the heat. The staff from Ankara soon joined us, along with AHAN Istanbul Coordinator Megumi Machi and her assistant Mr. Bejihi. All these young people did not seem to have any problems at all with the heat and went to see the sights of Izmir while I stayed at the hotel. 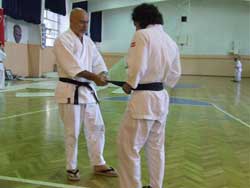 Uludag Sensei helps a student with his belt. 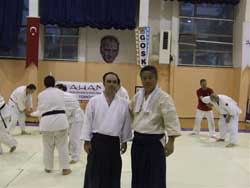 With Instructor Akyel in Izmir.

We held practice later in the evenings after things had cooled down in the 9 Eylul University gymnasium. Even though it was an evening practice, it was so hot that my keiko gi soon became as stiff and heavy as a cowboy’s duster coat. If this were not bad enough, it was not long before my uniform was so wet with sweat that it stuck to me like a wet towel. Most of the Izmir students were wearing heavy judo gis with t-shirts on underneath and they did not even break a sweat! “Native power,” I concluded. The next day we went to an outdoor sports club outside of Izmir for bokken and jo practice. This was the real test in the hot, hot sun!

Every morning we were in Izmir, I jogged for an hour in the early morning on the beach, and every evening we ate dinner at my favorite restaurant in Izmir. It was a good visit all in all, and the Turkish food was simply delicious. 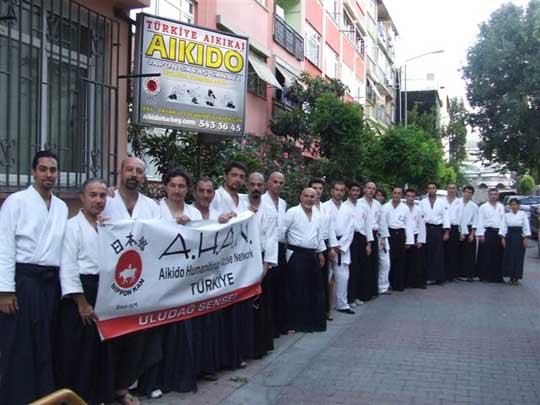 Uludag Sensei’s hombu dojo is Turkey Aikikai Headquarters in Istanbul. Istanbul is a fascinating, colorful city with a glorious history and international flare. The bridges leading out from the bustling city connect Istanbul to Europe and vice versa. Looking out over Istanbul, I reflected on the fact that I have visited Turkey the most in the years since AHAN began.

We held practice for two evenings at Uludag Sensei’s dojo in Istanbul. Many of Uludag Sensei’s senior students were there, and Uludag Sensei was in a great mood after the success of Kumagai Shihan’s recent seminar visit. I advised Uludag Sensei again, “It is good to be happy, but don’t relish in this ’victory’ too long. Your standing as a leader is on the rise which is something to be proud of, but there will always be those that you began your practice with that will not be as happy with your success. Be careful, this is the real world.”

For this trip from Denver to Hungary, Turkey and Iran, the most intense part of the trip was yet to come, so I rested well in Istanbul and held back a little in reserve while teaching. The most important consideration on a multi-country journey like this is my body condition, and this was a time to pace myself a bit. Before I can teach, my health has to be good, so this visit to Istanbul was a time for me to get mentally and physically prepared for what was next to come… Iran. 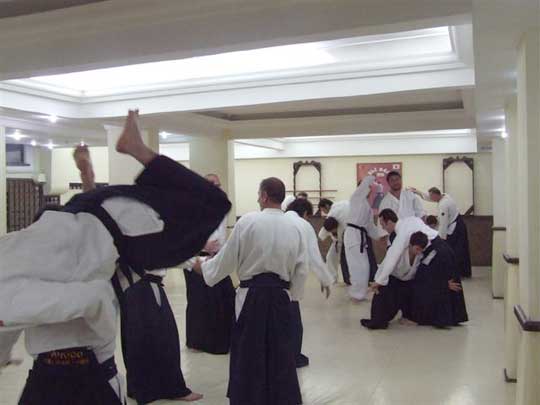 Uludag Sensei invited me to his home for dinner where I met his wife, two daughters and one beautiful grandchild. I was honored by their traditional hospitality and the food and atmosphere made me feel very much at home. All of my travel weariness vanished during this wonderful visit.

In Istanbul I was informed by AHAN Nippon Kan Istanbul Coordinator Megumi Machi that someone in Istanbul had plagiarized my book “Aikido for Life”, or at least large portions of it. Out of the 24 chapters that make up “Aikido for Life”, 18 whole chapters and some of the illustrations and text in the other six chapters had been published under someone else’s name. While flattering, this had been done without permission, so in actuality it was criminal. The AHAN staff in Turkey was quite upset about this. I asked Uludag Sensei to take care of the problem. 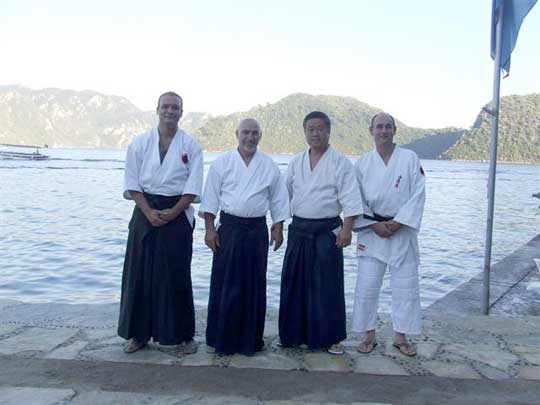 After returning from Iran to Istanbul, we took a one-hour flight to the resort town of Marmaris on the Mediterranean Sea. This visit to Marmaris was not part of the original itinerary, but once invited I postponed my return to Nippon Kan Headquarters in the U.S.

The town of Marmaris does not have an airport, so we landed in nearby Dalaman, about an hour and a half drive away. Instructor Huseyin Inanc was waiting for Uludag Sensei and me when we arrived and drove us back to Marmaris. The road wound up through the scenic mountainous region until we suddenly were looking down at the green Mediterranean Sea and the town of Marmaris.

Marmaris has a population of about 150,000 in the winter months and close to one million for the five months of summer. I did not see other Japanese tourists, but Maramist is quite a popular destination for Europeans. The 10 kilometers of beaches were lined with mansions and palaces, all for rent by the tourist elite. Topless bathing is commonplace, and while entertaining, there were so many people on the beach I ended up feeling a little overwhelmed. I found myself not quite sure quite where to cast my gaze as the throngs of scantily clad people passed by! It was also a bit confusing. Turkey is an Islamic country and yet the attitudes in Marmaris were quite liberated. I concluded that the people of Turkey were quite open-minded, due to centuries of trade and exchange with Europe and Asia. After just returning from the strict social codes of Iran however, Marmaris was a bit of a cultural shock! 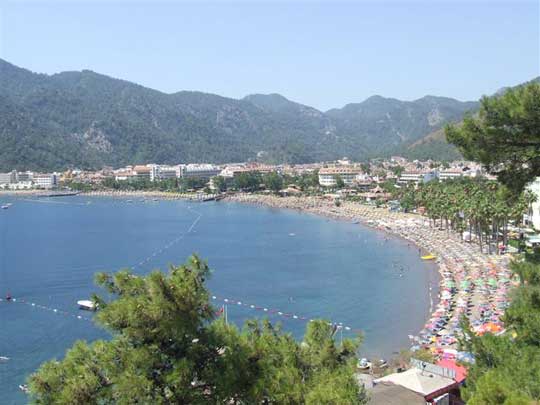 As we neared the area where the seminar was to be held, we came upon a large banner announcing our upcoming event. Practice was held in a luxury hotel located on a private beach. At the hotel, our group of students looked a little funny in keiko gis amongst all of the bikini clad (or not) bathers on the beach!

The Turkey Aikikai Marmaris students were all top-level professionals and members of the Marmaris social elite. Instructor Alper has been practicing Aikido for 10 years, and has been teaching in Marmaris under Uludag Sensei for two years. As a group, students were new to their Aikido practice on the mat, but knew a great deal about the written history and philosophy of Aikido.

It is true that people in different countries and different cities or environments practice Aikido at different levels. Groups that form and practice together under different circumstances are at different stages in their own development. For this reason, when I travel to dojos in other countries, I try to quickly ascertain what the students’ view of Aikido might be. It is then my job to blend my teaching to their level and their interests. Aikido is a multi-faceted art, so it is not for the students to adapt to my teaching. It is for me to adapt my teaching for each different group of students.

After practice we drove from Marmaris to the village of Amos to a private beach area named Professor Village. This was the end of a very long journey and finally a day to relax.