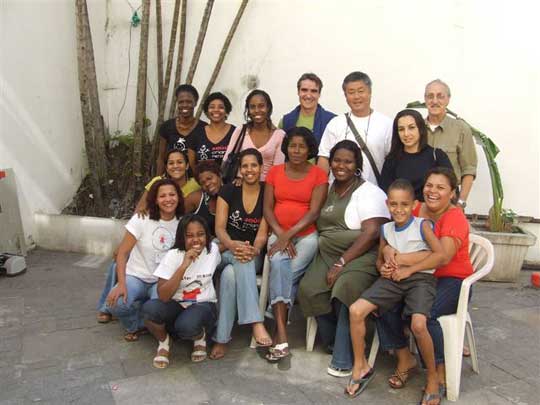 The fundraising seminar was held this year at the Tijuca University where the Pacific Rim Sports Tournament is held outside of Rio de Janeiro proper. The University donated the space for the seminar and 250 tatami mats were loaned to Nippon Kan AHAN Rio de Janeiro by the Brazil Judo Federation. Seminar attendees from other towns and cities stayed at the University dorm facilities. At the seminar closing, Renascer Shelter organizers were presented with the donations raised from seminar proceeds. 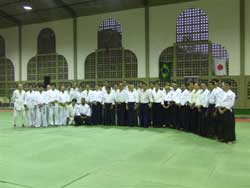 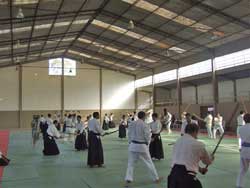 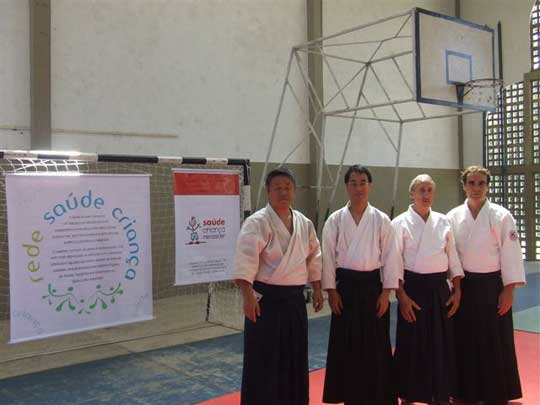 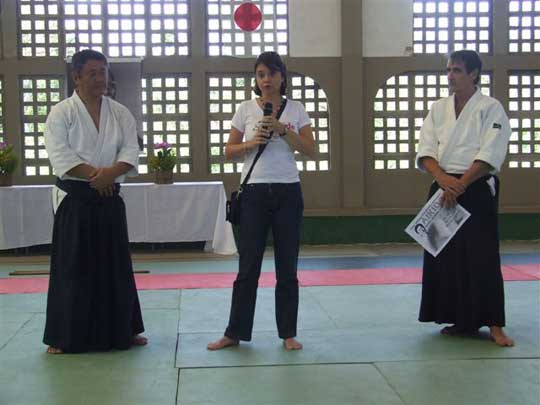 Consul General of Japan at Rio de Janeiro, Consul Toshio Ikeda was also in attendance at the seminar. Consul Ikeda began his own practice of Aikido during his university studies in Japan. Now he teaches Aikido three mornings a week from 7:00 am. to 8:15 am. at the Rio de Janeiro Japanese Association Center. Next year marks the 100 year anniversary of Japanese immigration to Brazil, so currently Consul Ikeda is very busy making preparations for this anniversary celebration. Even with a very full schedule, Consul Ikeda still finds time to teach the early morning Aikido classes with a spirit of harmony and as a way to communicate with local people through Aikido. I very much respect Consul Ikeda’s efforts and wish to thank him sincerely. Consul Ikeda has been very supportive of AHAN through the years, participating in AHAN projects, seminars and projects especially with the Kyougaku Drummers visit in 2005.

Also in attendance was Claude Walla Sensei, student of French Aikido pioneer and uchideshi to the Founder of Aikido, the late Andree Nokke. Thank you very much for your participation.

Homma Kancho held a meeting with AHAN Rio de Janeiro staff members and spoke to us about the direction and purposes of AHAN as a growing foundation. “Nippon Kan AHAN has a wide network of projects and supporters in many parts of the world and is continuing to grow. AHAN has become a recognizable organization in the world and we now receive many requests for assistance. As a small organization with limited resources AHAN today must carefully consider the level of need and assist those who need it the most.

“AHAN Rio de Janeiro has been very active with volunteer projects in your community and many good things have been accomplished here in Rio de Janeiro. However, compared to the level of need in other parts of the world, projects recently in Brazil have not focused on those who need help the most desperately. I think there is a hidden danger in becoming isolated in ones own society and not being able to see those in need outside of these levels. Sometimes it is hard to see the people at the bottom, the ones who live out of sight of our everyday experience. Please understand this point. I would like to see AHAN Rio de Janeiro reach out to those n your community most in need. There, we can make a small difference.

“This has to be the way of the future for Nippon Kan AHAN headquarters as well. To deal with the complexity of requests for aid and to distribute resources as effectively as possible, AHAN headquarters will even more in the future use a triage-like project assignment system based on the severity of needs. Any project that AHAN Rio de Janeiro would like to participate in at a local level is encouraged, but we will save AHAN Headquarter involvement for projects for the most in need. Thank you very much for all of your efforts. ”

We thank Homma Kancho for visiting us in Rio de Janeiro and look forward to the future.