Homma Kancho attended the Aikido Journal sponsored Aiki Expo 2005 this past May 27-29th, 2005 as an instructor accompanied by Nippon Kan Instructor Rick Thompson and Assistant Instructor Michael Barerra. Homma Kancho and assistants introduced Nippon Kan’s method of teaching to attending Aikidoka at the Expo held this year in Los Angeles. 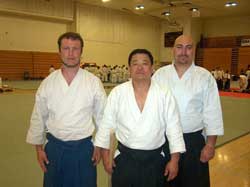 Homma Kancho had the following reflections about the Expo this year. “The Aiki Expo this year fell on Memorial Day weekend, and as I entered the Expo I found myself thinking deeply about the current state of Japanese Martial Arts in the United States. As I looked around me during the opening of the Expo with a Japanese perspective, the Expo seemed to me unorthodoxly organized. As I looked around me with the perspective I have gained by living in the United States for thirty years, the Expo definitely had an “American marketing style”.

I felt a little frustrated and confused as events were getting started which I decided was the result of a clash between my own Japanese and American perspectives. My confusion was not the fault of the Aikido Journal planning committees, or Chief Editor Mr. Stanley Pranin; they all had worked extremely hard to make this exposition a reality. My frustration came from my awareness that I was not 100% of either point of view; it was my own identity and perceptions that I was questioning. This year, the Aiki Expo fell on Memorial Day weekend which is a time to honor the men and women, past and present who have served to protect the freedoms we enjoy in the United States. It is a time to recognize the men and women who have given their time, their innocence and even their lives to insure that we all are free.

For this Aiki Expo 2005, students from many places spent a great deal of time and money to enjoy a smorgasbord of Aikido and other martial art styles and technique. I wondered if the students I saw around me understood that truth in martial arts stands on the line between life and death, the same line that the men and women who are serving this country today stand on in dealing with life in battle every day.

I watched the demonstrations, and there were many wonderful instructors to see. There were also a few instructors who seemed to have their ukes performing stunt ukemi to “demonstrate” their power and expertise, all in the name of “peace and harmony”. Since there is no competition in Aikido to serve as a reality check, some of these demonstrations had an eeriness and unreality about them; like a pageant of Martial Artists on parade. Especially the demonstrations where five or six ukes armed with bokken attacked an instructor only to be continuously “thrown” into the air for up to ten minutes at a time! I felt like I was in the movie “King of Hearts” or at a European Renaissance Festival watching dreams being played out in an imaginary world. I too of course was one of the martial artists in the parade, which was part of my reflection. It made me think again of Memorial Day, and the true reality that day stands for. This I decided was to be my lesson to learn from the Aiki Expo; to reflect on what is REAL in Aikido, and the Aiki Expo was a great place to learn!

My demonstration this time reflected what I had been feeling. I worked with physical power, working with a partner’s resistance and pain. Some parts of my demonstration were soft and other parts did not even look like Aikido as I explored what is real in Aikido and what is not. My demonstration was a personal challenge; I was challenging my self and my own Aikido; it was not a show for the cameras filming for the next DVD. I felt like a painter scraping the paint off the canvas over and over to start again to try to capture the essence of an image. I felt like the potter who dashes to pieces a beautiful porcelain bowl only because it is not quite perfect. I am lucky. I am the chief instructor of an independent dojo which allows me the freedom to challenge my own views and my own understanding. This is how I learn about my Aikido and everyday I learn a little more; even if I have to argue with myself about it to grow a little more each day.

Also among the many instructors at the Aiki Expo 2005,was Dento Iwama Ryu Hitohiro Saito Jukucho, Shin Shin Aiki Shuren Kai Tanren Juku, Iwama, Japan. Hitohiro Saito Sensei generously donated $700.00 from sales of Iwama style bokkens he had brought with him from Japan to AHAN (Aikido Humanitarian Active Network) to support of AHAN’s many humanitarian projects world-wide. Sincere thanks to Hitohiro Saito Sensei for his generosity.

*If you would like to see a more explanatory demonstration of Nippon Kan Aikido, please see the Homma Kancho’s demonstration at the Aiki Expo 2003.