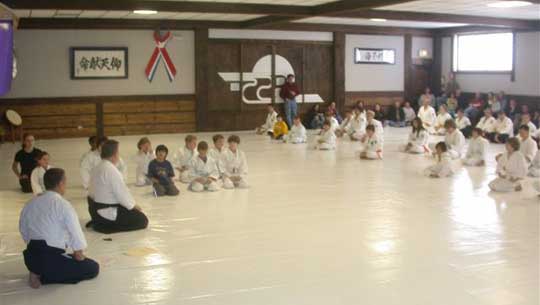 For the last thirty years at Nippon Kan, classes geared toward our younger members, age seven to fifteen have been called “children’s classes”. We have two “children’s” classes currently, one for general children members and one advanced class for our more experienced young members.

Recently Homma Kancho was in the dojo during the time that the advanced class was being held. After watching for a moment, he turned to Tom Dammen Sensei, and said, “You know, I feel a little bad for these older students who are twelve, thirteen, even fifteen years old. They are too mature to be called “children”. I bet they are not thrilled about that name either at that age”. The instructors thought about it for a moment and decided to break a thirty year tradition by changing the name of these classes to Nippon Kan’s Youth Program instead of children’s classes.

December 10th, 2005, marked the end of the second term for 2005 and was celebrated with demonstrations and promotions. All qualifying young members received a promotion that day, and there was a feeling of excitement and joy in the air. Since the day Nippon Kan opened until today, it has been strict policy never to have examinations or examination fees. Attendance, hard work and participation in Nippon Kan community activities is taken into consideration as promotions are decided upon by the Youth Program Instructors and Assistant Instructors committee.

Demonstrations were performed this day for gathered family members and friends, put on by the Youth Program advanced class members, live-in students (uchideshi) and other regular adult members.