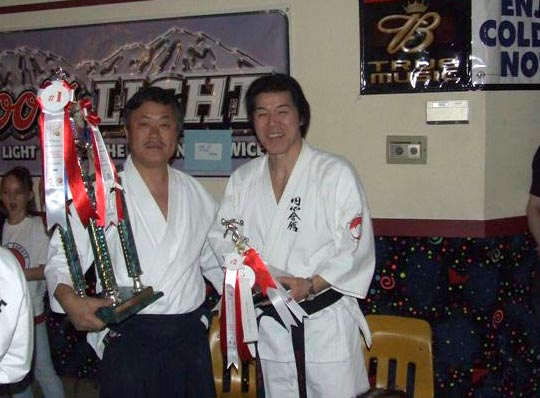 After counting all the points Nippon Kan takes home the big trophy!

This year, over 100 students participated in the 11th annual tournament between Nippon Kan and Enshin Karate. BOWLING tournament that is! This bowling tournament is held every year in honor of Joko Ninomiya Shihan’s birthday. This tradition was suggested by Homma Kancho, and has been celebrated in this fashion every since by Enshin Karate and Nippon Kan Students.

This year, Nippon Kan brought back the big trophy, and all of the years counted, Nippon Kan is in the lead…for now! Part of the yearly tradition is that the losing dojo’s uchideshi students are doused with coolers of ice water. Since the tournament is always held in February or March, this can be quite a chilly proposition! As the Enshin uchideshi prepared this year for the ritual, Homma Kancho stepped in and spoke “For the last ten years, uchideshi students have suffered the consequences of the ice water bath. I think that for this 11th annual tournament, it is time that Ninomiya Kancho and I “take the plunge”. Homma Kancho said this somewhat jokingly, then to everyones surprise, it happened!

For two completely different martial art styles, schools, instructors and students to have a chance to have fun together, and share in communication is a great opportunity. We all look forward to next year! 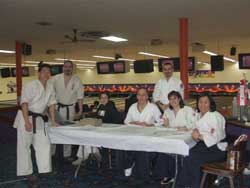 Thank you to the registration crew. Great Job! 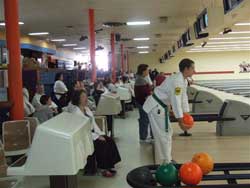 Bowling in uniforms no less! 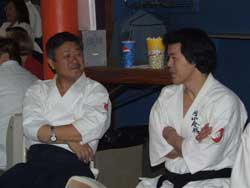 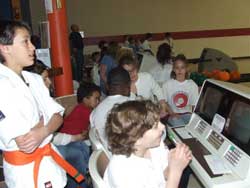 Both dojo’s young students join in the fun. 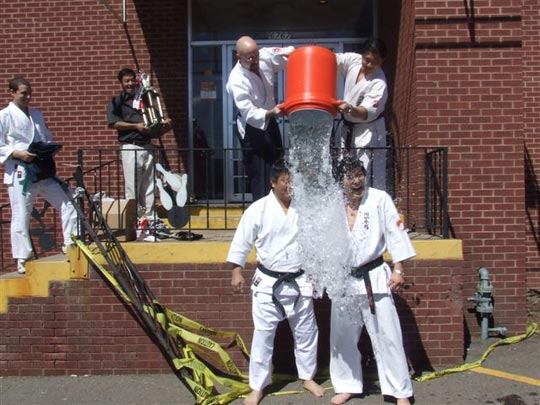 Special training for both Kanchos!