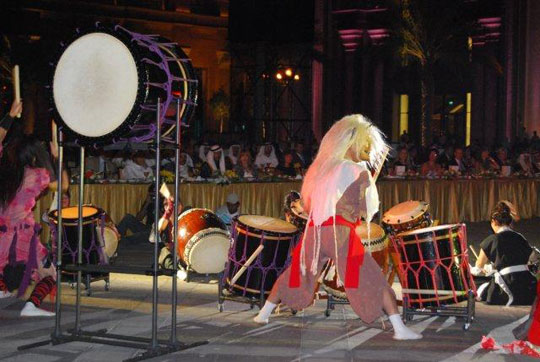 UAE Higher Colleges of Technology (HCT) sponsored the “Festival of Thinkers 2009” as an emporium of Nobel Prize Winners from around the world this past October. The international conference included a world-class concert for guests, royalty and other dignitaries at the Emirates Palace Hotel.

The Japanese Embassy in Abu Dhabi, in conjunction with Nippon Kan AHAN International Concert Series 2009 Coordinator, Gaku Homma, coordinated arrangements for the Matsukawa Kyougaku Taiko Drummers from Matsukawa, Japan to perform at a series of concerts organized for the Festival of Thinkers 2009.

The Kyougaku Taiko Drummers have performed for the Nippon Kan AHAN International Concert Series for the last six years, with performances in the United States, Rio de Janeiro and Buzios, Brazil, Ankara, Cappadocia and Istanbul, Turkey, and Cali, Columbia. The drummers have an international reputation of excellence and have thrilled audiences all over the world. This year was unique in that the entourage was made up primarily of women, and that the youngest participant, Mayumi Konuma, is a sixteen years old high school student in their hometown of Matsukawa.