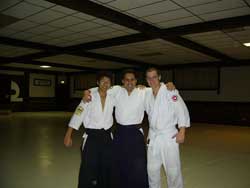 Three students will be graduating from Nippon Kan’s uchideshi program this term. Joshua Kemery, Hector Cid and Take Matsuo. All three survived to complete a semester in the coldest winter conditions Colorado has had to offer in many years.

After graduation Joshua will be returning to college here in Colorado. Hector, who is from Mexico City, will be returning to his home dojo run by his brother, AHAN Mexico Coordinator Fernando Roman Sensei. Hector was valiant in his efforts as a Nippon Kan uchideshi who I think had the hardest time with the cold. Hector will be graduating from the Nippon Kan uchideshi program with honors for his hard work and diligence. Take Matsuo is a student from the highly prestigious Kyoto University, in Kyoto, Japan. There Take was the captain of the Kyoto University Aikido club of which he was a highly skilled Aikidoist and strong leader. After finishing his stay at Nippon Kan, Take will be returning to Kyoto for his university graduation ceremonies later this spring.