This year too, Nippon Kan had many good uchideshi students that graduated from the Nippon Kan uchideshi program.

There are many kinds of students that come to Nippon Kan to begin their training as full-time live in uchideshi students. Some complain from the start and soon quit and others that make it through the program, but depart the dojo without making much of an impact; leaving no footprint behind. There are those students however, that actively apply themselves to the training and participate in Nippon Kan activities with great enthusiasm. When these students graduate from the program, there is a great celebration, as all Nippon Kan students gather to congratulate them on their efforts. These students leave their mark on the dojo and are not soon forgotten.

In reality, the dojo itself is just an empty box. A box to be filled by finding one’s self. Those who graduate from the Nippon Kan uchideshi program with honors realize that it is up to them what they learn during their practice at Nippon Kan. The students that graduate with honors are the students that put everything they have into every step they took at the dojo. The benefit of this applied learning is in finding the resources within one’s self.

The following students are our Nippon Kan uchideshi who graduated with honors in 2008. 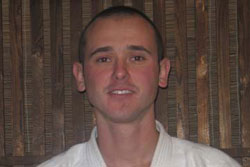 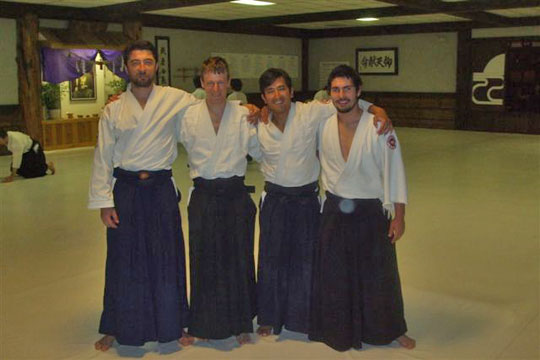 Michele Zanrei
Michele originally practices at an Aikikai dojo outside the city of Parma, Italy and was a 1st term graduate with honors in 2008. During his training, Michele excelled in his positive practice and mastered well the organizational skills needed to balance his daily practice with dojo chores and duties. He was a good role model to both Nippon Kan general students and other uchideshi alike. As a warm and sincerely kind individual, Michele made a lot of friends at Nippon Kan. After completing his 1st term, Michele returned to Italy. This December, Homma Kancho visited Italy and met Michele at the seminar Homma Kancho instructed in Parma. Homma Kancho had the occasion to visit Michele’s home and was welcomed warmly by his family.

Alturo Alvarez Kawai
Arturo originally practices at an Aikikai dojo in Lhapaz, Bolivia and was a 1st term graduate with honors in 2008. Arturo accompanied Homma Kancho to Nepal where he assisted in training there and also served as translator and assistant to Homma Kancho this past October in Colombia for the AHAN International Concert Series in Cali, featuring the Matsukawa Kyougaku Taiko Drummers. Arturo is first a lawyer by profession and assisted Nippon Kan greatly with communications in all of the Spanish Nippon Kan AHAN projects. Arturo was especially involved with the Colombia Keiko Gi’s for Kids Project and researched all of the import regulations and made arrangements for the shipping and delivery of the keiko gi from Nippon Kan to Colombia

Ermrah Ergul
Ermrah originally practices at an Aikikai dojo in Istanbul, Turkey and came to Nippon Kan for a one month special term. Ermrah was sent by the company he works for in Istanbul to study English as well as participate in Nippon Kan’s uchideshi program. Ermrah was very busy going to language school full time and keeping up with his uchideshi training and responsibilities. He used his time well and had a valuable month of training on many levels during his stay in Denver. Homma Kancho teased Ermrah noting that it was especially challenging for Ermrah to be an American style bachelor without his wife and family to take care of him for a month!

Alberto Castillejos Mahr
Alberto originally practices at an Aikikai dojo in Mexico City, and also graduated with honors as a 1st term uchideshi in 2008. Alberto was well mannered and hard working during his time as an uchideshi, but you could tell on occasion that Alberto had grown up with a gardener and a maid as part of his family’s household. Alberto had a very productive experience as an uchideshi at Nippon Kan, where not only did he learn Aikido, but also learned cooking, cleaning, laundry, and basic organizational skills. All of these, were new experience for Alberto. Alberto returned to Mexico after graduation to return to his studies at the university. 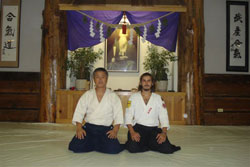 Cihan originally practices at a Turkish Aikikai dojo in Izmir, Turkey and came to Nippon Kan this fall for a one month special term. Chihan adapted well to the culture and living conditions of uchideshi life, practicing rigorously and keeping up with all of his daily chores and duties. After completing his special term, Cihan returned to Turkey to prepare for his upcoming marriage. We all wish him the best of luck in his new life! Before his departure, Cihan made a generous donation to AHAN as part of the tradition of Ramadan in his Muslim faith. This donation has been allocated for assistance in Mindanao, Philippines for next year. A follow up report will be written about this donation allocation in Nippon Kan website updates for 2009. 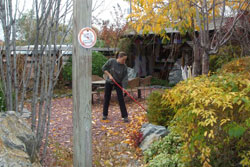 Banu originally practices at a Turkish Aikikai dojo in Ankara, Turkey and also came to Nippon Kan this winter for a one month special term. In Ankara, Banu operates her own dojo, and came here not only for her own practice, but to learn Nippon Kan teaching methods, dojo operations and volunteer project organization. Banu was a very hard working uchideshi and participated in many activities with senior Nippon Kan members. She left Nippon Kan having made many new life long friends. This was Banu’s second visit to Nippon Kan Headquarters, the first being a visit as assistant with her instructor in Turkey, Ali Uludag Sensei in 2005. In 2007, Banu also joined Nippon Kan AHAN’s tour to Korea and Mongolia.  As a cross-cultural ambassador, Banu was a wonderful representative of Turkey.
Link here to Banu’s experiences as an uchideshi at Nippon Kan
Banu’s Report in English
Banu’s Report in Turkish