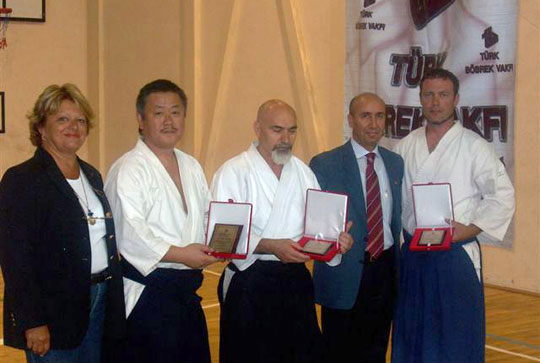 The seminar was held at a gymnasium in Istanbul and over 100 aikidoists from fifteen different dojos came together to attend this seminar to raise support for this important cause in their community. 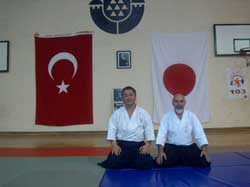 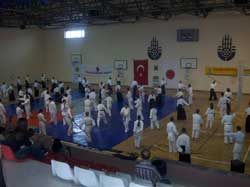 Practice at the seminar. 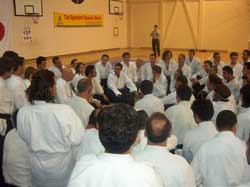 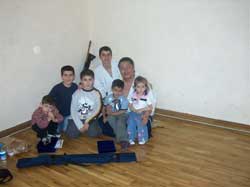 Homma Kancho with children at the seminar.

Ali San Uludag Sensei visited Nippon Kan General Headquarters in Denver, Colorado this past summer at the invitation of Homma Kancho and Nippon Kan. This visit was an AHAN’s IISA (Aikido Humanitarian Active Network’s Instructors in Support of AHAN) training activity meant to promote cultural understanding among IISA Instructors. Uludag Sensei came to Nippon Kan to learn about AHAN activities while sharing with us his dynamic Aikido teaching style.

This seminar in support of the Turkey Kidney Foundation was a direct result of the exchange between Nippon Kan students and staff and Ali San Sensei and his assistant during their visit to Denver. Ali San Sensei successfully took the philosophy of AHAN back to his homeland to facilitate in helping others in his own community.

In Turkey, for a martial art community to come together in support of community charities is an extremely rare and new event; one we hope will bloom and grow in the times to come. So rare was this event that the seminar was well covered by local television and newspapers. 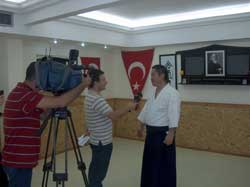 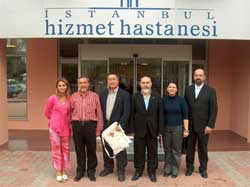 The second scheduled visit of the day was to the Turkey branch dojo of Traditional Dento Iwama Ryu Aikido, run by Mehmet Dogu Sensei. Dogu Sensei was an uchideshi in Iwama, Japan under the late Morihiro Saito 9th dan (Aikikai). Homma Kancho and Dogu Sensei have met before in Istanbul, and also been in acquaintance through association with Dento Iwama Ryu Aikido’s Hitohiro Saito Jukucho.
After the conclusion of the seminar, Homma Kancho and Ali San Sensei visited the Turkey Kidney Foundation’s Hizmet Hastanesi Hospital with the guidance of Dr. Osmond Akali. They learned from Dr. Akali that the foundations number one challenge in fighting kidney disease is not as much financial as it is a problem of education. Educating the general public about the need for kidney transplants and other new medical treatments is very high on the foundations agenda for the future. Having a group of healthy martial artists hold an awareness event for the Kidney Foundation was a positive communication tool with the greater community. Follow up seminars and other fundraising events are planned by Ali San Sensei to further support of this foundation. 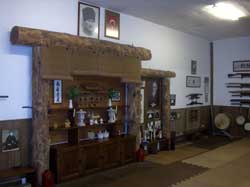 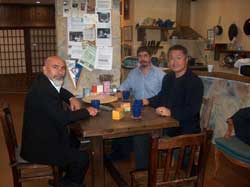 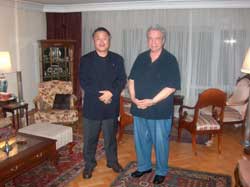 The following day Homma Kancho and Ali San Sensei headed by bus to the capitol city of Ankara for another scheduled seminar hosted by one of Ali San Sensei’s senior students. Many of Ali San Sensei’s students in Ankara not only practice Aikido but also study the Japanese language at the Tonichi Kyokai or Turkey Japan Association. Homma Kancho visited the Tonichi Kyokai and met briefly with Junko Sugiyama Sensei who teaches Japanese language there. Together they discussed the possibility of future cultural projects at the center. 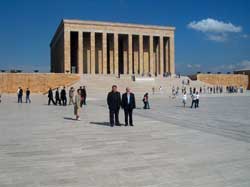 Homma Kancho and Ali San Sensei at the Attaturk Memorial in Ankara. 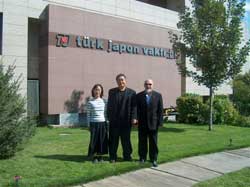 In front of Tonichi Kyokai center with Sugiyama Sensei. 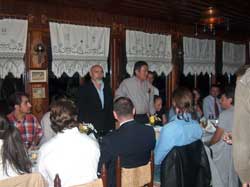 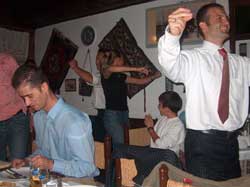 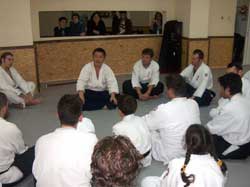 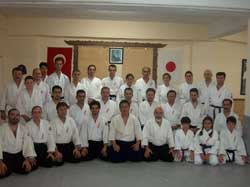 After class, a welcome party was given for Homma Kancho where he saw first hand just how much Turkish people love to dance!That evening Homma Kancho taught classes at Ali San Dojo Federation’s Gaku Homma dojo. The classes were organized by Instructor Banu Aliversieis who accompanied Ali San Sensei to Nippon Kan General Headquarters in Denver this past summer.

Note from editor: To learn more about traveling to Turkey for business or pleasure contact Seha Iscan at Bora Tur www.boratour.com. Seha is Ali San Uludag Sensei’s chief coordinator and holds the rank of Aikikai Sandan. Seha is fluent in English and his tourism office is conveniently located in central Istanbul.