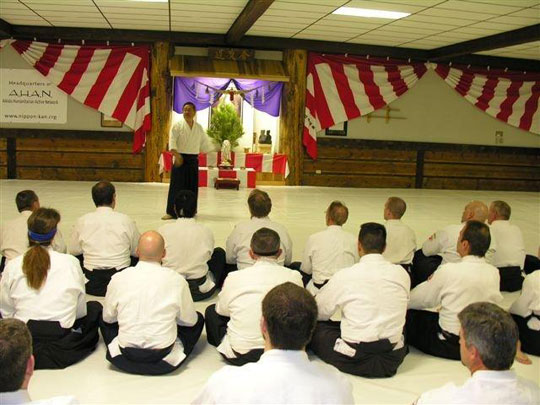 From Homma Kancho’s first speech of the New Year, “Sit comfortably, your knees and your health are most important”.

As is tradition, 2009 drew to close with keiko osame (last practice of the year) and the transition from the old year to the new was recognized with toshi koshi geiko (New Year Eve practice). The New Year was celebrated with keiko hajime (first practice of the year) held in the dojo decorated with red and white banners for good luck and the shrine adorned with matsu kazari (pine branch decorations).

The close of the old year and the welcome of the New Year is always celebrated in the same fashion. This is Nippon Kan tradition and a symbol of stability and renewed focus for the year to come.

This year, special guests instrumental in Nippon Kan’s history and development were invited to share in our Nippon Kan New Year tradition. Mr. George Blankenship, real estate and budget advisor for Nippon Kan, who, along with current Nippon Kan Vice President, Emily Busch, was instrumental in the purchase of Nippon Kan’s current facility in 1996, was invited to speak at our opening New Year ceremonies as a guest speaker. Other guests included David Shakeley, one of Homma Kancho’s original accompanying students from Misawa air force base in Japan in 1976, Mr. Morris Brown; Nippon Kan’s most senior student at 87 and his wife Betty, and Consul Koji Mitsui of the Japanese Consulate in Denver.

Homma Kancho spoke of all our special guests, “Today, Nippon Kan has grown into a large international organization. It is important for all of us not to forget our beginnings and all of those who have made this journey successful”.