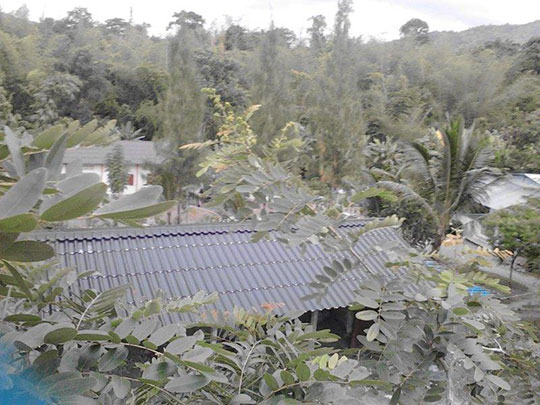 The children are mostly from the Karen tribe and speak their native language at home at the Bilay House. In school, they learn the language of their new country of residence; Thailand, so these children are bilingual. Since they are also refugees from Myanmar, they also know a little of the official Burmese language of Myanmar. This new Bilay House Heritage center I believe is important for these children to maintain their own identity.

It is difficult for Karen refugees from Myanmar to settle legally in Thailand and the immigration and naturalization regulation are challenging. It would also be difficult for these children to return to Myanmar with little left behind. The Heritage Center is a place for the children to learn to work with their hands, to develop important skills as a tool for their future survival. Learning the weaving skills of their ancestors preserves their heritage from the past but also stimulates skills that will help provide a future livelihood. 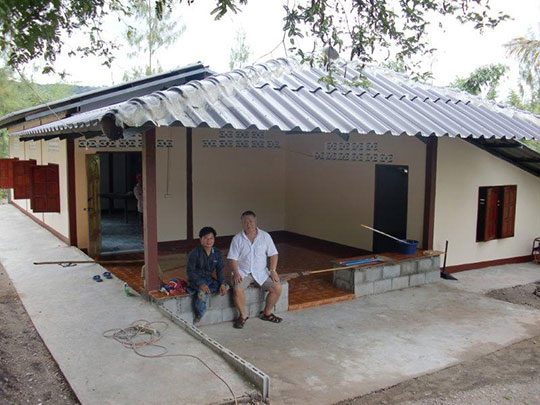 In front of the new Heritage Center; Pastor Bilay and Homma Kancho

Pastor Bilay, even with his physical limitations challenges all tasks set before him. He is an inspiration to all and a role model for anyone with physical challenges. Recently, parents have brought their own physically challenged children from as far away as Bangkok to the Bilay House to meet with Pastor Bilay. In every case, it is with inspiration and hope that they return.
Link here for an inspiring video introduction of Pastor Bilay during the construction of the Bilay House Heritage Center in “Limits but not Limited” and a chronicle on the building of the Bilay House Orphanage in 2011.

The music accompaniment in the video introduction is an official church hymn # 404 titled Golden Hill and was actually composed by a Japanese composer.

Accompanying me on this visit for the opening of the heritage center was Shun Endo who was part of the original construction crew of the orphanage facility 3 years ago. Shun was amazed at how much the Bilay House had grown and developed since those first days of construction and was moved by how the children were thriving in their new home.