The “MOO Club” at Nippon Kan Dojo is comprised of Aikido Nippon Kan Dojo members who are at or over the age of 60, and the average age of the club members is currently 67! 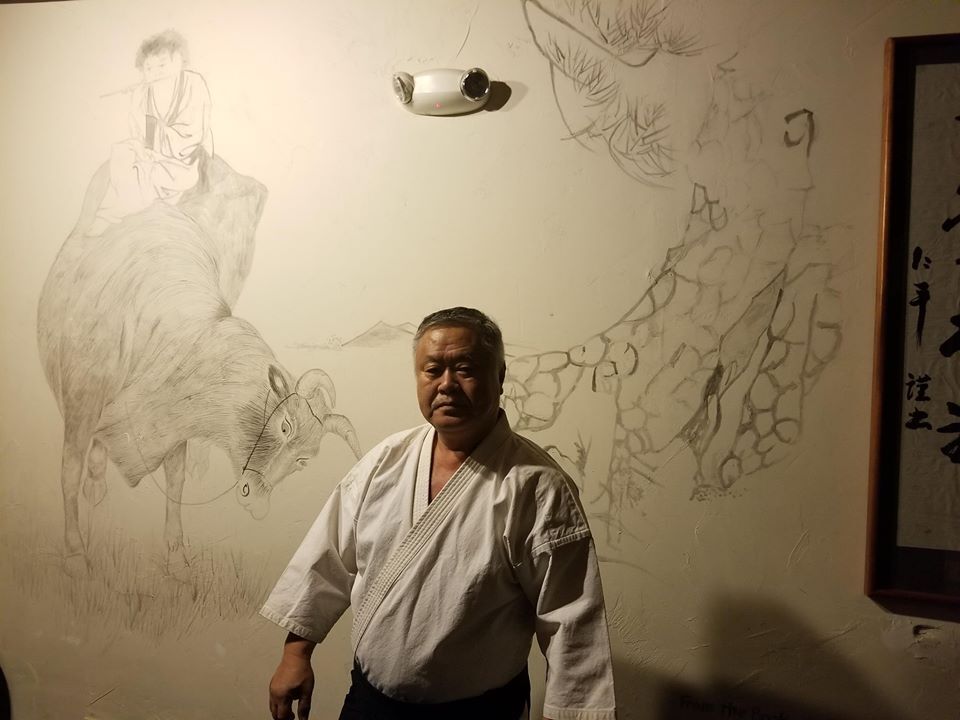 Mr. Gaku Homma, Founder & Kancho of Nippon Kan, in front of the drawing of 騎牛帰家 (Kigyukika) in the lobby of Nippon Kan 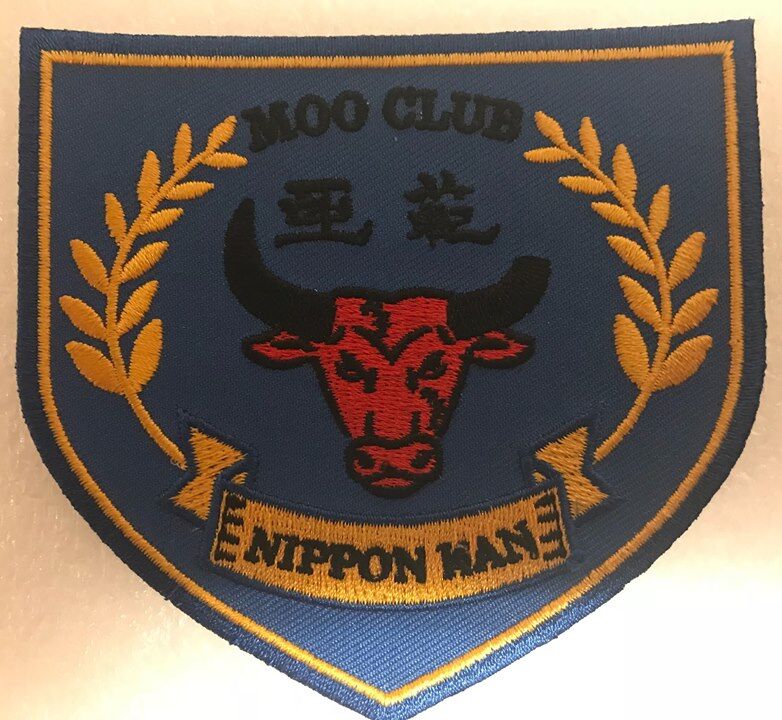 The MOO Club patch is designed by our fellow Aikidoist & designer Luca Bocedi of Milan, Italy

The MOO club members are given the privilege to wear a member-exclusive patch on their Keikogi (稽古着) sleeve, and certain tacit agreements are bestowed upon them for regular members to respect and follow, such as…

Say “MOO…” when you must walk across in front of them, instead of boring “Excuse me” …;

In the locker room, help them (the key is to just do it without saying a word because if you ask to offer help, their answer may be “NO!” …)

if they seem to be experiencing some awkwardness to wear a pair of socks or a pair of pants, shorts, etc…;

if they seem awkward and seem to be taking too much time just to take off a T-shirt…;

if they start putting into their bag a Keikogi (稽古着) of not their own, don’t mention it right at the moment and wait for them to realize what they have done (warning: they may not notice it on the same day…) …;

if they tie a knot only on the front side of their Hakama (袴) but not on the back and start heading toward the Dojo, just give them a waiver silently…;

just pretend not noticing even if they are wearing a Keikogi (稽古着) inside out;

respect if you notice them using a deodorant for much younger generations…;

never burst into laughter even if or when a quarter of your eyeballs catches them in an underwear with a bunch of kiss marks or dollar ($) signs…, just as you would remain polite with people in ugly sweaters…;

Last but not least…, let them go potty first…!

​Just as the exclusive MOO Club Member Patch design denotes with the scarred face of an Bulli, ALL the MOO Club members are the ones who had decided to learn something new after having experienced much in their lives and have been working hard and playing their part for the continued success and prosperity of Nippon Kan as an integral part of the community we collectively serve.  And above all, all of them not only remain energetic but maintain a sense of humor to laugh off and smile about these jokes and remind us to keep having fun with others around us! 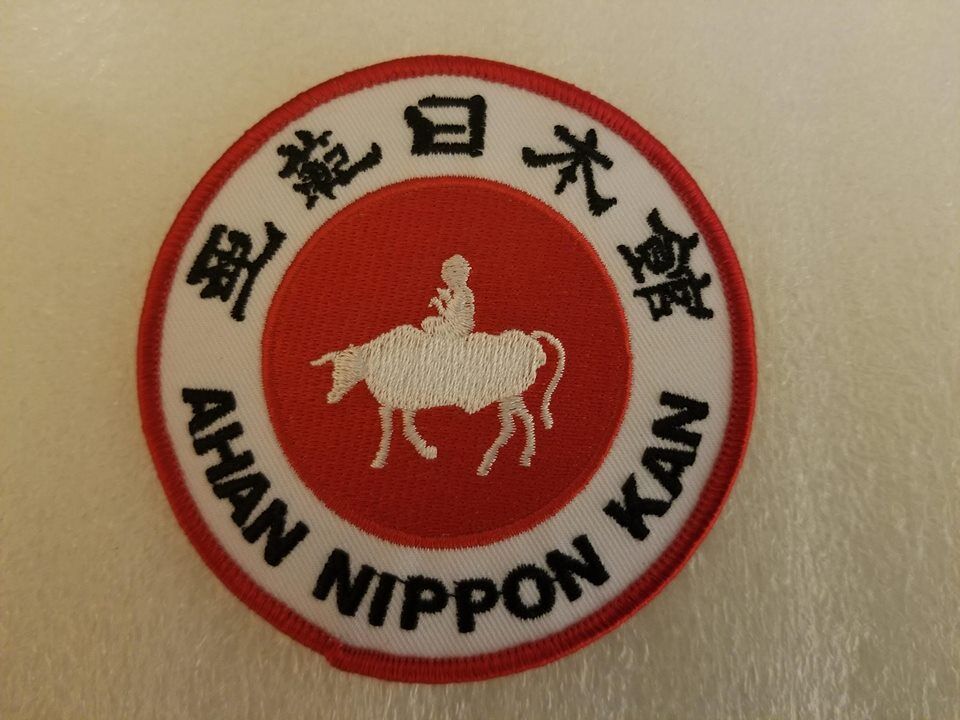 The design of the official patch of Nippon Kan is derived from the 6th picture: 騎牛帰家 (Kigyukika).

This  is the official patch of Nippon Kan.  At the center of the patch is a boy playing a grass flute while riding on the back of an Ox, and this is the central philosophy & credo of Nippon Kan.  This is from the TEN BULLS that reflects on the stages of self-discovery and personal growth that we undergo as we endeavor in the journey of self-awareness.  If interested, please search by key words like, “Ten Bulls”.

​It is natural for the demography to shift over time in any country and in the U.S., and I think we are witnessing an increasing number of Aikidoists who have been practicing Aikido for more than 50 years.  At the same time, it looks like Aikido and perhaps Budo in general has not been attracting as many younger generations (e.g. aged 15 ~ 25) in the recent years as decades ago.

By the way, I’ve seen quite a number of Keiko Hajime Group Photos from all over the world in the past week or so, and I found students not in Keikogi, but in casual attires in the back in some of the group photos.  In my experience of having visited many Dojo in many countries, I can say that it’s been an increasing trend to see students practice in casual attires, while I should mention that in my experience such a trend does not seem to be globally spreading, but is limited to certain countries in the world.  Given my experience, it’s somewhat fascinating that the lower the average age of students without Keikogi, the lower the life expectancy of the people in the countries.  And I’ve also witnessed at some Dojo that elder students with Keikogi are quite authoritative and influential in a way to seemingly be preventing the development of younger generations of Aikidoists in a healthy manner, albeit it may not be intentional or ill-intended.

The Founder of Aikido, Ueshiba Morihei demonstrated “age-appropriate movements” in Aikido when he was well past the age of 80.  If an Aikido practitioner were not able to practice Aikido fully and in a healthy manner due to some physical constraints around a relatively young age of 50 or so, s/he should reflect upon how s/he had been practicing and change the way to teach younger students, for example to adopt a style of teaching that is more according to the human anatomy and based on sports sciences, with a hope to help prevent younger students from developing physical difficulties in the years to come to allow them to continue to enjoy practicing Aikido for as long as they wish.

Although I will elaborate in another article, Nippon Kan stopped practicing “suwari waza” about 30 years ago.  Any instructors ought to think deeply and keep in mind that any style of instructing that may leave students with some kind of physical impediments after years of practicing will likely haunt them.

I am proud of the properness in the style of teaching exercised at Nippon Kan as proven by many active MOO Club members at our Dojo!

​With the inception of the MOO Club, Nippon Kan is encouraging the MOO Club members, who have much experience to share with us, to stay active and continue forging ahead and sometimes act as our role models to better guide us in our lives, on and off the Dojo.

​It’s Hotei (布袋) (often called Hotei sama(布袋様) in Japanese.  Aka Budai, the Laughing Buddha) as you may have seen at oriental souvenir shops.  Hotei sama (布袋様) is sometimes referred to as Banzai Hotei sama (万歳布袋様) in association with him being a Buddha of happiness and plenty.  In fact, although his attire is ragged and rustic, he is carrying a bag of infinite possibilities and his rich bodily figure represents peace, as his body shape, of all body shapes, is said to have been the highest representation of peace in his era.  Don’t you think Hotei sama (布袋様) reminds us of the proverbial old & generous man with white beard in red attires?  And some MOO club members seem to be following the same path that Hotei sama (布袋様) and Santa Claus must have followed (or paved…!?), at least around their bellies…!  (shhh…)

​ALL the MOO Club members are still young-at-heart and forever boys in spirit, and they are all remain to be like the boy on the back of the Ox. 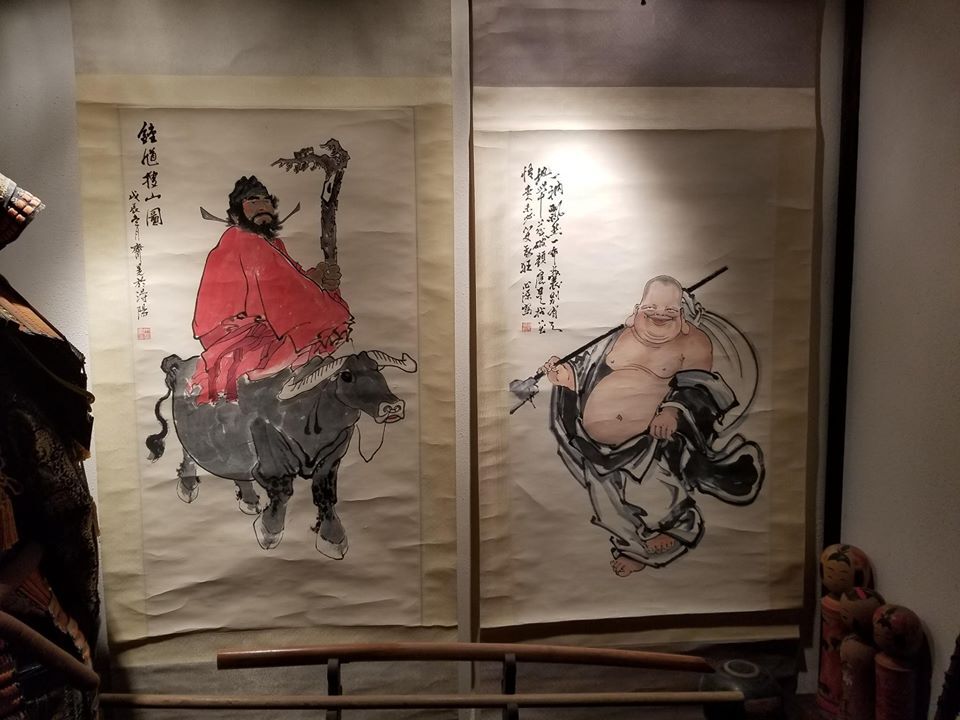 ​Above all, the relentless energy and the behind-the-scene support, commitment & dedication from these long-timers have been an integral driving force for the continuing prosperity of Nippon Kan!

​If you have been curious about the art and budo of Aikido, or if you have been an Aikidoist with a long blank period with even a small pilot light of desire to get back into it, please come and check us out at Aikido Nippon Kan!

​Moo Club members and the rest of Nippon Kan members are looking forward to meeting you!