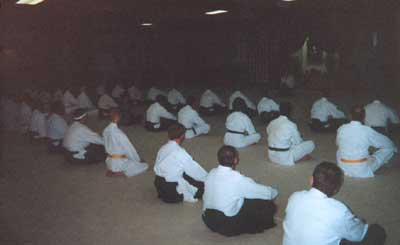 Under crisp blue skies, there was a familiar feeling of fall, a change of color in the leaves, a chill in morning air. The Nippon Kan gardens still had not lost their bloom, but something was different this September morning…the flag in the garden was flying at half-mast.

After witnessing the tragedy of September 11 on the news, Homma Sensei acted with a sense of urgency and purpose and on September 12 called his students together for a fund raising seminar to support the victims of this travesty.

With only a few days notice, over seven 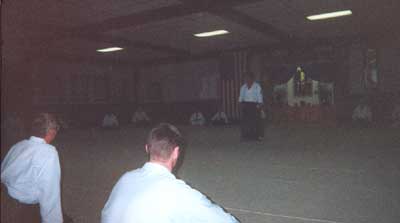 ty Nippon Kan gathered for a one-day seminar to raise funds to be donated to the American Red Cross.

The mood at the seminar was purposeful as everyone practiced hard under Homma Sensei’s direction. The seminar raised $4,250 which will be sent on as a token of our support of all those affected by this tragedy.

This seminar was a project of AHAN (Aikido Humanitarian Active Network) founded by Homma Sensei this year. As early as 1990 Homma Sensei held a fundraising seminar for children of the soldiers sent to the Gulf war. He has continued this tradition and with AHAN will continue to support humanitarian efforts world-wide.

During the seminar Homma Sensei spoke “I have lived in the United States longer than I have lived in Japan. I have been able to develop Nippon Kan and AHAN on US soil. In a time like this it is important to give back the support that has been given. We all have sympathy for the victims and their families. For those of us who were not directly affected by this tragedy, it is our obligation to not waste the lives of those who died. It remains for us to hold our heads high, look straight ahead and continue the pursuit of our dreams.” 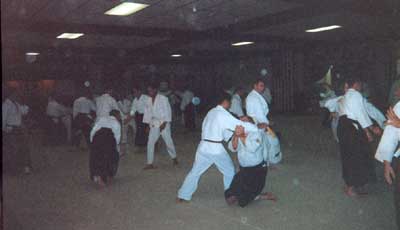 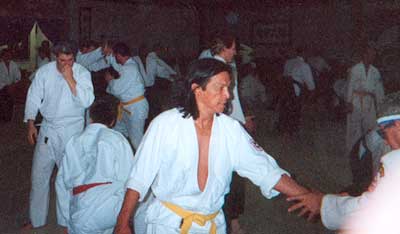