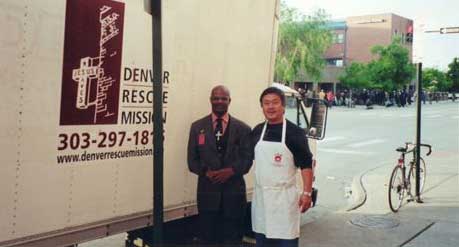 For Charles, I promised you I would put your picture on our website!

Since it has been fifteen years since we been serving meals at the mission it is not unusual for us to occasionally bump into former residents of the mission that have now reintegrated themselves back into society. One such gentleman is Mr. Charles, who suffered severely from a spinal injury he received in an automobile accident years ago. After the accident he could not work, and eventually became homeless. He entered the Denver Rescue Missions residency program and worked very hard to overcome his personal obstacles. Today, although his injuries will never completely heal, he lives on his own, and serves as a counselor to others at the mission who have fallen on hard times. He gives to others, as others gave to him in his time of need.This past June, Nippon Kan celebrated fifteen years of service and 40,000 meals served to the homeless in Denver at the Denver Rescue Mission. In 2005 alone over 3000 meals were served, and on December 18, 2005 the last meal service of the year was held. It is a tradition at Nippon Kan to include a small gift along with the meal at this end-of-year service and this year we supplied gloves to the 250 guests who attended the dinner. Early that morning of the 18th, about twenty five students stayed after morning practice to help prepare the foods for dinner. Twelve student volunteers came to the mission to serve the evening meal.

This year many students and friends helped support this meal service to the homeless project in Denver and to every one we wish to thank sincerely. Next year, the first meal service for the homeless in Denver begins on January 15th 2006. As a new year begins, so does our service to our community begin again.