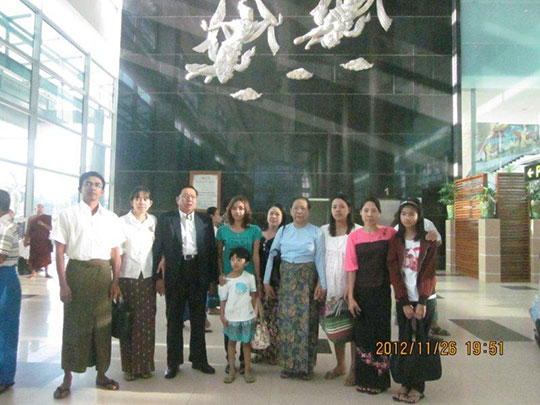 Mr. Than with his family before leaving Myanmar

President Obama visited Myanmar on the 19th of November, 2012, heralding the move toward democracy awakening in Myanmar.

Mr. U Than Aung has worked as the Chief Editor of the English Myanmar Times since before the rule of the current military government and has witnessed the unfolding history of Myanmar firsthand. Mr. Than worked hard during his career to write the truth even after suffering his own imprisonment and the relocation of his family. This summer Mr. Than retired after a long career and to celebrate this achievement, was invited by Homma Kancho and Nippon Kan General Headquarters to visit the United States and Japan.

Mr. Than’s credentials were so impressive he was granted a visa to the United States at the US Embassy in Yangon in just 10 minutes. While Mr. Than was at the Embassy for his visa interview, Homma Kancho and Mr. Than’s family stopped at a noodle shop for a bowl of noodles nearby. Mr. Than returned from the Embassy with his approved paperwork before they had finished eating! Homma Kancho noted that he could feel the change in the air in Myanmar marked by the upcoming visit of President Obama.

We were waiting at the airport in Denver for Mr. Than’s arrival after his long trip from Myanmar. At first we could not find him, and feared he had missed a connection along the way. Not to fear however, he had slipped right by us! We were used to seeing him wearing traditional clothes called tite pone in Myanmar and did not recognize him in a suit!

Mr. Than had an incredible nine-day visit in Denver filled with events and “western hospitality”. A highlight of the visit was a welcome reception held in his honor, where Mr. Than received written official letters of welcome from Denver officials presented by Judge Kerry Hada. 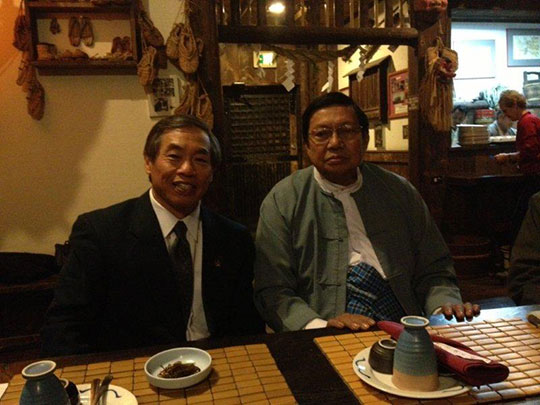 Judge Hada and Mr. Than in the Nippon Kan Headquarter museum

Special thanks to Judge Kerry Hada, a leader in the Denver Community at large and a well known advocate for the Asian community in Colorado. Many thanks for Judge Hada’s many contributions and his great understanding of AHAN activities world-wide.

Currently in Myanmar, Mr. U Than is the Principal of the AHAN Myanmar Learning Center in Yangon and the father of AHAN Myanmar Coordinator Nilar Than. This visit to the United States and Japan was created by Homma Kancho for Mr. Than to experience democracy as it becomes a reality in his own country. For a man with Mr. Than’s educational background and experience as an editor, this was a trip of a lifetime, one that he will be able to vocalize and share with the people of Myanmar upon his return.

This was a visit of monumental importance for everyone who had the chance to be part of this experience.

Link here to the daily chronicle of Mr. Than’s visit to the United States and Japan