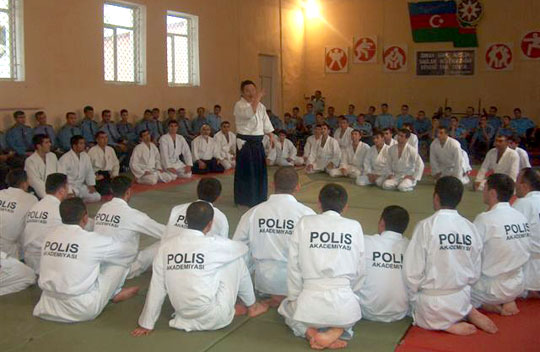 After his visit to Turkey had come to an end, Homma Kancho and Ali San Sensei left for the neighboring Republic of Azerbaijan. They had been invited to come to Azerbaijan by a local television station in Baku, Azerbaijan’s capitol. The station was interested in putting together an hour and a half documentary on the introduction of Aikido to the Azerbaijan Police Academy. 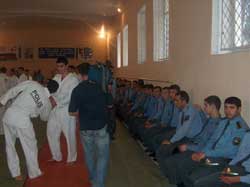 Television film crew at the seminar. 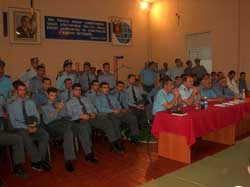 Homma Kancho began by demonstrating techniques that the cadets had never seen before, and it was an eye opening experience for all them. Homma Kancho then invited everyone to learn the basics of these techniques themselves which broke some of the tension in the room. Soon, Homma Kancho’s teaching style soon put everyone at ease, and even the language barrier and lack of familiarity with Aikido did not keep everyone from having a great time.
As Homma Kancho entered the National Police Academy martial art gymnasium, there were over eighty cadets clad in fresh new karate uniforms lined up, standing at attention on the floor. 150 uniformed senior cadets and instructors were also in attendance, watching attentively from the sidelines. The atmosphere was tense as the seminar began; this was the Academy’s first introduction to Aikido. 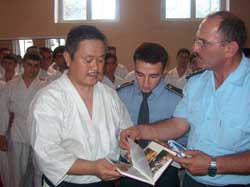 After practice, everyone had questions for Homma Kancho. 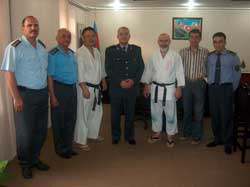 Alekserow Sensei began his study of Aikido at a university in Moscow. He returned from Moscow to Azerbaijan in 1995 where he started the Azerbaijan Aikido Federation.
After the conclusion of a successful demonstration seminar at the Police Academy, Homma Kancho and Ali San Sensei paid a visit to the Azerbaijan Aikido Federation, instructed by Farhad Alekserow Sensei. About fifty students gathered for practice with Homma Kancho. After practice Homma Kancho spent an interesting time with students over dinner.

Homma Kancho was the first Japanese Aikido instructor to visit the interior of Azerbaijan. Homma Kancho visited Azerbaijan as part of his own personal study of Aikido and how it is practiced in other parts of the world. It also was a research mission for possible future AHAN activities. 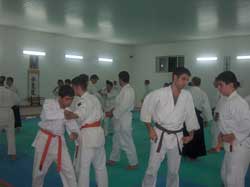 Practice at the Azerbaijan Aikido Federation. 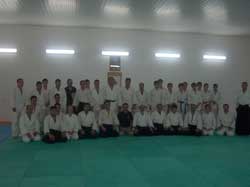