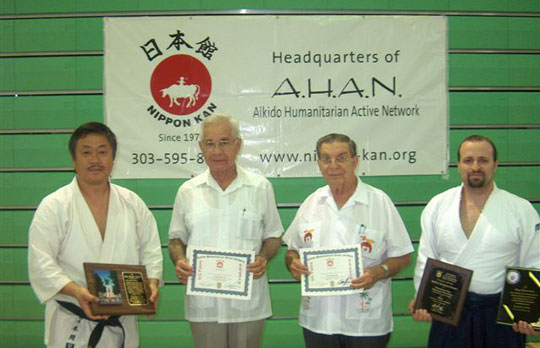 This was Homma Kancho’s second visit to Puerto Rico, and he was accompanied on this trip by Nippon Kan Assistant Instructor Michael Barrera who served as translator as well as assistant for this fundraising event.

Shushinkan Dojo is approximately two hours from the capitol city of San Juan in the coastal town of Mayaguez. Shushinkan dojo is home to about thirty students who practice Aikido under the supervision of Bolivar Ramirez Sensei. Homma Kancho received word from Bolivar Sensei about his plans for a promotion seminar to support of Shriner’s Children’s Hospital. Homma Kancho agreed to lend a hand in this effort to support children in need in Puerto Rico.

Homma Kancho remarked about the event, “It does not matter if a seminar is large or small. If a leader of an Aikido community understands the concepts of AHAN and my philosophy about building relationships between our dojos and surrounding communities then it is my duty to show my support as well.

After we return from this trip to Puerto Rico, I am scheduled to go to Istanbul, Turkey and the nearby country of Azerbaijan. In Azerbaijan I will be introducing Aikido to the Azerbaijan National Police Academy where they have never practiced Aikido before. This will be a big challenge, so this trip to Puerto Rico to visit with Bolivar Sensei and his young and energetic students is a great chance to enjoy practice together and work on the curriculum for Turkey and Azerbaijan as well.”

Mr. Manuel de J Ayala and his associate from Shriner’s Children’s hospital came to seminar closing on Sunday to accept the donation generated by the seminar. Ramirez Sensei was also given a plaque awarding him with official recognition as an IISA Instructor. We look forward to seeing the projects that Ramirez Sensei and his students become involved in within their community in the times to come.

Travel expenses for Homma Kancho and his assistant were provided by AHAN and Nippon Kan General Headquarters, who sponsored Homma Kancho’s participation in this community service event. 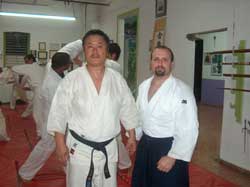 LINK HERE to an article about this visit to Puerto Rico in 2005 by Homma Kancho written by Shushinkan Dojo member Claudio Neves. 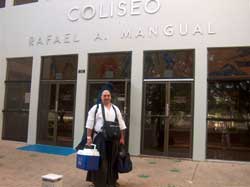