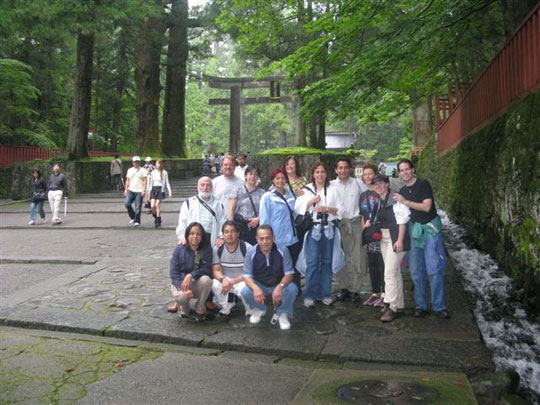 In front of the Nikko Toshogu Shrine.

It has been a long time since Nippon Kan sponsored a tour to Japan. In the old days, Nippon Kan organized at least one tour to Japan every year, sometimes two. In the last seven years, since the creation of AHAN (Aikido Humanitarian Active Network), Homma Kancho’s schedule has become increasingly busy with projects in many different countries around the world, making it more difficult to organize a tour to Japan. Japan too in the last seven years, has become more expensive as the dollar has devaluated making the trips to Japan even more costly than before.

This one week tour to Japan focused more on Aikido practice than sightseeing since the purpose of the trip was to attend the 40th year anniversary of Aikido Kobayashi Dojo in Japan. We practiced with the Meiji University Aikido Club, attended a practice instructed by Aikikai Doshu Moriteru Ueshiba and practiced at the Kobayashi Dojo with Kobayashi Shihan. While in Tokyo we did have time to do a bit of sightseeing and also visited Nikko; the burial grounds of three generations of Shogun, and the historical old city of Kyoto.

There were 10 people on this tour that came from Mexico as students of Mexico Aikido Take Musu Aiki including chief instructor Fernando Roman Sensei and five people including Homma Kancho who came from the US. Homma Kancho has taken over 300 people to Japan on Nippon Kan tours over the years, but Homma Kancho confessed that this tour with 15 was a bit tiring for him. He told me, “The first time I took students to Japan was over 30 years ago. As time passes, Japan seems more distant to me and it is more challenging to guide a large tour. It is not just the fact that Japan is more expensive to travel than it use to be, it is probably just the fact that I am getting old! I used to never tire, even taking even a group of 30 people on a non-stop tour of Japan. Now…”

I know Homma Kancho was speaking the truth from his perspective, but all of us on this tour thought it to be a wonderful experience and Homma Kancho a challenge to keep up with! If he was tired, it sure did not seem so.

We all would like to thank Homma Kancho for making this tour possible and to Nippon Kan Japan Branch coordinator Chrys Kikuchi for showing us around Tokyo. It was a great trip and a good time was had by all!