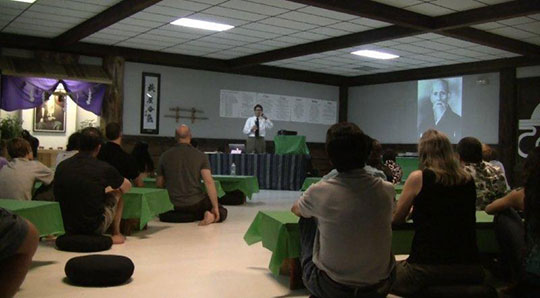 Mr. Pranin focused his 2 hour lecture on the history of the Founder of Aikido, Morihei Ueshiba before World War II.  Since many of the Japanese Aikido Instructors who were active in this era of Aikido history have now passed away, Mr. Pranin’s depth of knowledge and impeccable research into this era is invaluable. Homma Kancho is one of the last remaining living testimonials to that time and Mr. Pranin’s lecture confirmed information that Homma Kancho has always included in Nippon Kan’s history.

Mr. Pranin and Homma Kancho have long been good friends and Mr. Pranin readily accepted Homma Kancho’s invitation to join us in Denver for this special Summer Marathon lecture event. Nippon Kan is an independent dojo however since Homma Kancho was the last uchideshi to the Founder Ueshiba there was much to talk about and the conversation between them lasted late into the evening.

Mr. Pranin is currently an editor for Aikido Journal and is one of the most renowned Aikido historians and authors on Aikido in the world. Mr. Pranin lives in Las Vegas, still practices Aikido and spends his time cataloguing the thousands of documents and interviews he has collected in Japan over the last decades.  www.aikidojournal.com.