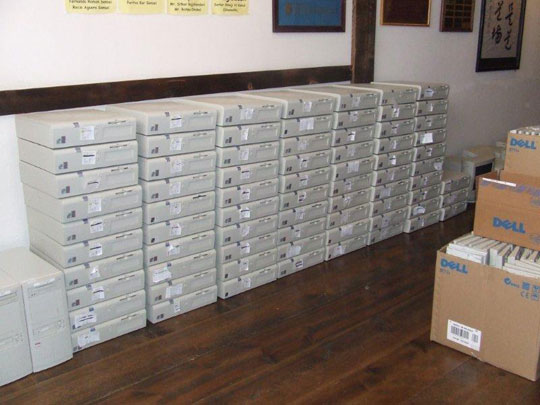 This spring, Nippon Kan General Headquarters launched a new computer and school book donation campaign in Denver. Donated computers are to be used to support student study at the new AHAN Learning Center in Yangon, Myanmar and to create a new youth internet center in Malawi, Mindanao, Philippines.

According to United Nation export regulations, Nippon Kan can only accept complete computers that are Pentium 4 or better with flat screen monitors (for space restrictions in carrying or shipping). Computers that are too old cannot be accepted as they no longer qualify for export and must be disposed of in an environmentally safe manner.

So far this spring we have received 5 new and 6 used computers ready for donation! To date, AHAN Nippon Kan has distributed over 200 computers to orphanages, schools and individuals in need all over the world. Link below to read about some of these past computer donation projects in Bangladesh and Mongolia.

Nippon Kan General Headquarters is also collecting used and textbooks for the AHAN Learning Center in Myanmar. We have already accepted enough English and Japanese middle and high school level text books for math, science and English studies for the next trip to Myanmar.

We will report on the delivery of all donated computers and textbooks in the next upcoming Nippon Kan activity report.