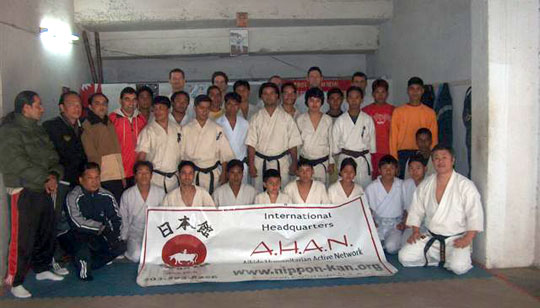 The visit to Nepal was at the invitation of martial art groups organized under the Nepalese Government National Sports Council. This visit was Homma Kancho’s second visit to Nepal, and on this visit he conducted a three-day seminar for local Nepalese martial artists. Homma Kancho was accompanied by Nippon Kan Vice President-AHAN President Emily Busch Sensei, three Nippon Kan office staff leaders and four Nippon Kan graduate uchideshi (live-in students). On this trip, the practice of Aikido allowed for a very successful cross-cultural experience for all of us. 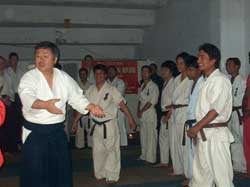 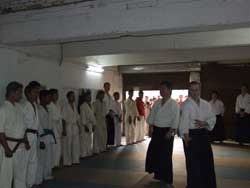 As the morning sun brings light, a crowd gathers outside to watch.

Member-Secretary Mr. Kishor Bahadur Singh of the Nepalese National Sports Council paid an official visit to observe Homma Kancho’s teaching and after the seminar granted official sanction for the formation of a Nepal Aikido Association. This newly formed association was named by the board as Aikido Nippon Kan Nepal. Aikido Nippon Kan Nepal has been formed with sixty-six new student members. 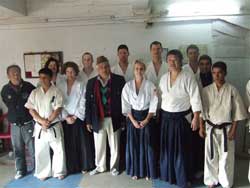 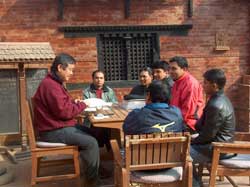 This association has been formed with the support of many outstanding individuals in Nepal that we all had the honor and privilege to meet. Nippon Kan Headquarters is currently making plans to send an instructor long-term from Denver to teach Aikido to members and students of the new Aikido Nippon Kan Nepal Association later this spring. 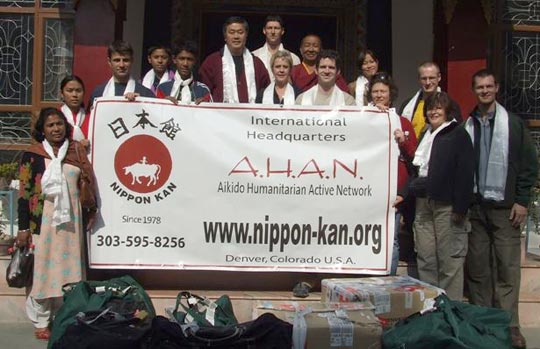 To continue support for the Drubgon Jangchub Choeling monastery that began with Homma Kancho’s first visit to Nepal in January of 2005, the Nippon Kan delegation hand carried four hundred pounds of school supplies and two computers on this trip to Nepal. The school supplies were donated by students and friends at Nippon Kan General Headquarters in Denver, and the computers were allocated from Nippon Kan’s used computer redistribution program. All of the school supplies and computers were donated to the Kathmandu branch monastery for their education and assistance programs for underprivileged and orphaned children. 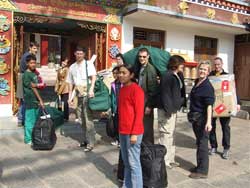 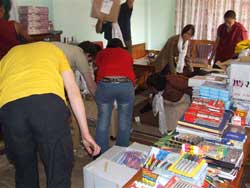 Opening all the bags. 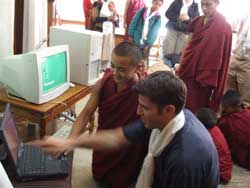 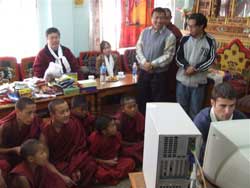 Setting up the computers delights the young monks!

Homma Kancho and the Nippon Kan delegation were invited to visit the headquarters of the Choeling Monastery, the Manjushri Di-Chen Buddhist Learning Center about a two hour drive outside of Kathmandu. The Manjushri Di-Chen Buddhist Learning Center has many branches throughout Nepal, but this center focuses on religious studies and the studies of all academics and English as well. The Nippon Kan delegation met with Ven Drubthob Rinpoche and was given a tour of the facility. The tour was highlighted by a delicious ten-course vegetarian luncheon prepared by resident monks. For more information visit www.drubthobrinpoche.org . 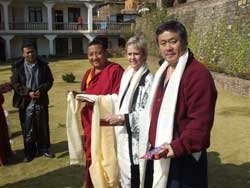 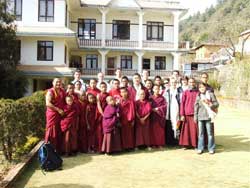 After all of the projects had successfully drawn to a close, the delegation said “farewell” for now to Nepal. Next stop; New Delhi India.
The Nippon Kan student delegation did a great job on this trip to Nepal as ambassadors of good will and contributed greatly to all of the AHAN activities. Fortunately, our busy schedule did allow for time to tour the many historical sites and temples in Kathmandu and surrounding areas. AHAN Nippon Kan Nepal staff members Puja Rai, Dayangi Sherpa and family lavished us with kindness as tour guides, interpreters and shopping consultants! Thank you very much for making this trip an experience never to be forgotten. 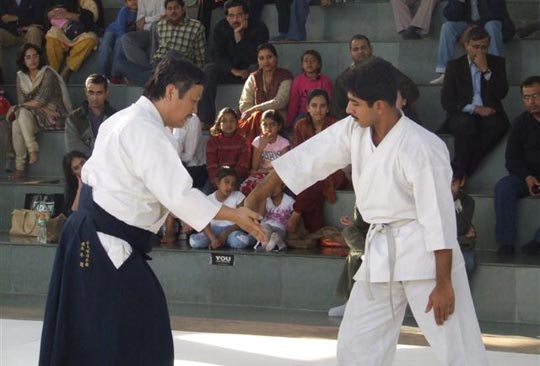 Public demonstration given by Homma Kancho.

After our time in Nepal had drawn to a close, the Nippon Kan student delegation left for New Delhi, India. This portion of the trip included a seminar that was organized at the invitation of Chief Instructor Paritos Kar Sensei of the New Delhi Aikido Dojo. The seminar was held at the Samskriti International School in the Camakya Puri Embassy district.

The seminar was a full two-day event and was attended by Aikidoists from New Delhi, France, England, Italy, Japan and other parts of India including Bombay. In India, the practice of Aikido is not yet widely spread, especially in the New Delhi area. One of the purposes of this seminar was to introduce Aikido to a general audience, and many members of the media were present including reporters from CNN. 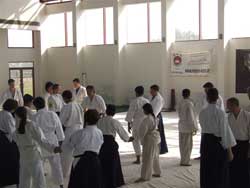 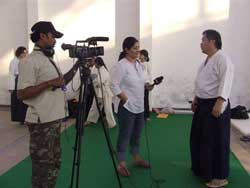 Paritos Kar Sensei, Chief Instructor of New Delhi Aikido Dojo practiced at Aikikai Headquarters Hombu Dojo in Tokyo, Japan for over fourteen years. As a student at Hombu dojo, Paritos Kar Sensei was very popular and well known. Wanting to keep his mornings and evenings free for practice, he earned his living passing out flyers outside of train stations and crowded shopping districts for local businesses. Paritos Sensei has many stories of life in Japan as a struggling young foreign student.
One of the primary sponsors for the seminar was Mr. Shiv Vikram Khemka, Vice Chairman of the SUN Group, who is very involved in education and the promotion of Aikido in New Delhi, especially to the young adult community. Mr. Khemka was introduced to Aikido in the United States, and has practiced Aikido in Europe and Japan. Mr. Khemka, his wife and two children, all members of the Royal Families of India and Nepal helped in organizing and attended the seminar. 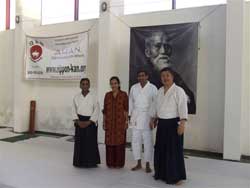 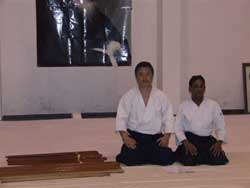 The efforts of Aikidoka such as Paritos Kar Sensei who work diligently on the “front lines” are to be appreciated, and Homma Kancho and the delegation gave their support by listening, offering advice, and helping in future planning. These “front line” pioneer instructors are doing the real work and living the real struggle. These discussions were an important learning experience for all of us.
In 2002 Paritos Sensei traveled to Habarovski, Russia where he lived and taught Aikido for two years. He opened two dojos in Habarovski before returning to his homeland of India in 2004. Here in New Delhi, Paritos Kar Sensei has now opened New Delhi Aikido dojo which is off to a good start with dedicated students and a wonderful staff. As with all dojos in their beginning years, Paritos Kar Sensei and his students are working hard to form a solid foundation in their community. This makes for a mightier challenge in a city where Aikido is not widely known.

In such a short time, good friendships were made. The closing of the seminar was an emotional one that everyone felt, and even Paritos Sensei shed joyful tears. Link here to an insightful account of the seminar written by a new student of New Delhi Aikido: http://www.aikikaiindia.com/page07-9.htm.

On this visit we learned that Japanese instructors do not visit India very often. We hope that in the future more support will be given to the “front line” pioneer instructors in India who are working hard to help the Japanese art of Aikido grow in their own country.

Today all over the world, students who have trained in Japan have returned to their native countries and opened dojos of their own. Mastering the art of Aikido in Japan is indeed an accomplishment, but assimilating this Japanese art with the customs, religions, traditions and economics back home can be a great challenge. Adjustments have to be made in each country for Aikido to be able to grow in each different native environment. These adjustments are sometimes very challenging and require a great deal of patience, persistence and ingenuity to achieve.

During this process of assimilation most dojos have modest beginnings, and in the times they need the most support, they sometimes are too small to attract the attention and support of headquarter dojos in Japan. It is sad that even if they are recognized they do not receive the support they may need to form a solid foundation when it is most needed.

Today India deservedly receives a lot of attention from many countries outside of Japan and the United States in the world market place, yet in our countries, we often do not have enough chances to truly learn about the culture and history of this vast country. Paritos Kar Sensei, his very talented assistant Yulia Pal and his students are doing a wonderful job through their practice of Aikido to understand parts of Japanese culture. Here we sometimes know little more about India than about its delicious curries and the practice of yoga! Aikido served as a bridge on this journey that allowed us to experience and understand each other’s cultures on a much deeper level.

In the short time we had in India, all of us had many chances to experience things that tourists don’t usually have a chance to experience, and after the seminar we were able to squeeze in a trip to the Taj Mahal and visit other historical sites and local markets in New Delhi. All too soon, it was time for the delegation to leave India, and Homma Kancho and return to the United States. 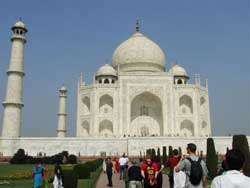 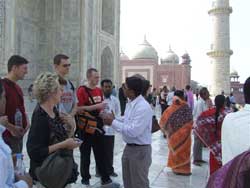 At the Taj Mahal. 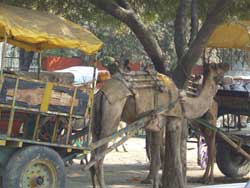 For us, the camels were quite a sight to see! 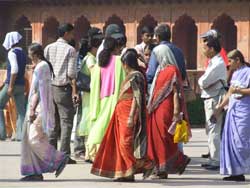 We thank everyone very much for all of the gracious hospitality we were shown on this special visit. Next year in India is “The Year of Japan”, and many different government sponsored activities focusing on Japan will be presented. Homma Kancho plans to return to New Delhi for this exposition to assist in an Aikido demonstration with Paritos Kar Sensei.

Besides being a full-time Aikido Instructor, Paritos Kar Sensei, being fluent in both the Japanese and English languages serves as a translator, guide and business coordinator. As an Indian native, he is very knowledgeable about Indian customs and protocol and having lived in Japan and Russia for extended periods gives him quite an advantage in arranging trips for business or travel in India for Japanese and English speaking people. If you are planning a trip to New Delhi, it is highly recommended that you contact Paritos Sensei. Engaging his services as a guide or consultant is another small way to support Aikido and our new friends in India! Paritos Kar Sensei can be contacted by email at paritoskl@hotmail.com 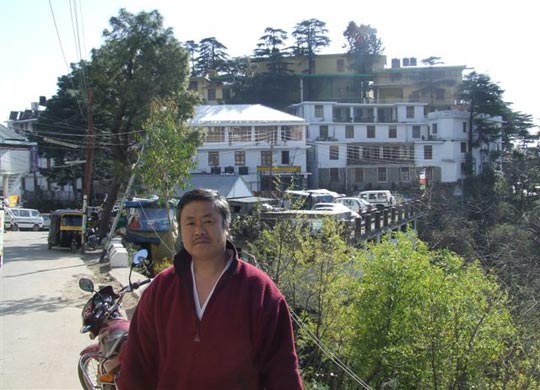 Homma Kancho with the Skurankan Temple in the background.

After the Nippon Kan student delegation departed New Delhi, Homma Kancho, AHAN Nepal staff coordinator Puja Rai and I, Scott (a Nippon Kan graduate uchideshi) left for the town of Dharmasala, six hundred kilometers north of New Delhi. We traveled from New Delhi twelve hours by night train followed by a three hour trip by car up into the hills. Dharmasala is the current home of the Dalai Llama who came to India in exile from Tibet in 1959. The Dalai Llama lives in upper Dharmasala in a complex called “The Palace” adjacent to the Skurankan Temple. 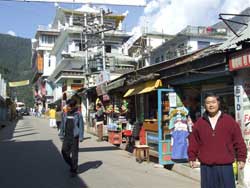 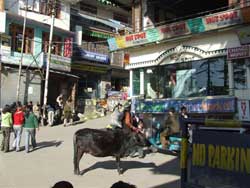 Homma Kancho spoke of this visit.” This visit to Dharmasala is a private trip for me. I have always thought that if I was ever in India that I would like to visit here. I am very happy that this trip has afforded this opportunity. Out of respect I don’t believe my personal thoughts should be included in this activity report.