New Project Begins
A new project has taken shape in Mongolia for Nippon Kan and AHAN with Homma Kancho’s visit. For the past three years, AHAN has been supporting an orphanage in Ulaanbaatar, Mongolia. Upon recent evaluation, it has been determined that the Mongolian government and other foreign aid agencies have been able to provide enough support for the orphanage for Nippon Kan and AHAN to look for others in greater need. Homma Kancho came to Mongolia on this visit in search of those with needs that government and other agencies could not fill. 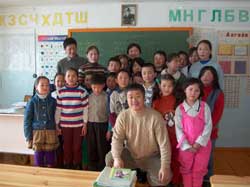 Homma Kancho with children in the first-third grades.

What we found was a school, a privately funded school with the name of “Hope”. This school named Hope was originally a child development center started by a German NGO (non-profit organization) that helps children that suffer from poverty and the complications that poverty brings. A Mongolian exchange student helped the hand of fate by taking the story of this center to Japan. She found her way to the heart of a town in Japan named Numazu City, by talking about the plight of the children she had seen there. Commenting to local town officials, “If someone is too poor to go to school, they will never be able to escape that poverty. It takes education to leave poverty behind.” After talking about the center to NPO officials in Numazu City, the city took on the project and raised $27,000 for the centers development. That money built the school of Hope, which opened its doors in September 2003.

The school’s focus is to teach reading, writing and arithmetic to children who are not able to attend public schools for a variety of reasons. Some cannot attend because of work obligations to their families, others lack of funds. Some are prohibited from school by their familie’s nomadic lifestyles, others by old cultural barriers.

The $27,000 raised in Japan went a long way toward building the structure of the school named Hope, but there was little left for maintaining operations. Since it is privately built, the school named Hope does not qualify for government assistance and is not funded by the Mongolian government. For the seventy or so children there, the operating budget is about $450-500 per month. There is no money for textbooks, school supplies, educational toys or tools, equipment etc. More is spent on one child per month in the United States for education, than the entire student body here at Hope. These children share a pencil until it is worn down to nothing. 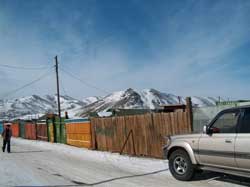 We found the school inside this fence. 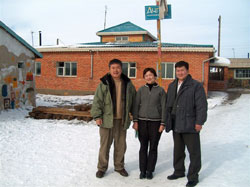 1. Raise the monthy operating budget by at least $500.00Homma Kancho checked into the schools background and listened carefully to the teacher’s and the children’s needs. He collaborated his research with the Zorig Foundation, a Mongolian foundation that serves to check the credibility of service organizations, and found the school named Hope credible. After concluding his research efforts, Homma Kancho pledged AHAN support for the next three years with the following goals in mind:

2. Develop cultural studies of Mongolian music and art to compliment basic studies in order to encourage the development of creative as well as technical skills.

3. Build a computer program from literally the ground up. Internet access is a distant dream, but the Mongolian AHAN staff is taking the first steps by mapping out the needs for at least phone line installation to the school.

The next day Homma Kancho went into action working towards these goals. To the end of bringing cultural education to the school named Hope, he purchased ten Morin Huur (a Mongolian string instrument similar to a cello) and other instruments from the Morin Huur Preservation Association for the children to use. The Morin Huur Preservation Association also promised to supply teachers to help the children learn how to play the instruments. A timeline of June 2004 was set to assemble at least ten working computers, printers, and copiers. Toward this goal three have already been donated. If you would like to donate a working computer, printer or copier, please email information on what equipment you might have to donate to info@nippon-kan.org . Donations can be tax deductible, and upon receipt of your donation, a value will be determined by our computer staff and a receipt issued. Please contact Nippon Kan by email before you send any computer equipment to determine compatibility. 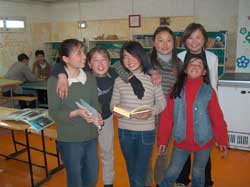 During Homma Kancho’s visit to the school named Hope, he listened carefully to teachers and administrator’s concerns. Homma Sensei voiced his concerns about the children in their care. “Children who’s homes are too poor to provide them with decent clothing and nothing to take to eat for lunch, cannot go to regular schools. Many of them end up on the streets. The children that are served here are the children from the bottom of the pile, and they are very poor of most things. One thing they are rich in is their smiles. They have nothing, yet they smile from the heart. Their smiles are the most beautiful to see. I want to protect these smiles and see them grow. The lunch they share at the school named Hope is usually only tea and two biscuits, yet this lunch is so coveted, it is a major motivation for some of these children to come to school. There are others out there however, that cannot yet come to any school. It is these children we hope to reach some day soon”.

With that Homma Kancho passed out much needed school supplies to the children who showed their delight in such simple gifts, gifts that we often take very much for granted.